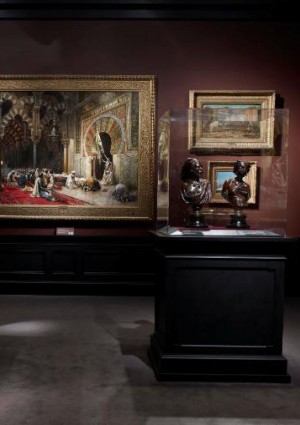 The Walters’ collection presents an overview of 19th-century European art. From the first half of the century come major paintings by Ingres, Géricault and Delacroix. The collection also includes major works by the Barbizon masters, including Millet and Rousseau, the academic masters Gérôme and Alma-Tadema, and the modernists Monet, Manet and Sisley. Highlights of the collection include Claude Monet’s portrait of his first wife, Springtime; Alfred Sisley’s panoramic view of the Seine Valley, The Terrace at St.-Germain, Spring; and Edouard Manet’s realist masterpiece, The Café Concert.

The courtly arts of 18th-century France are well represented here. The collection of Sèvres porcelain includes pieces made for the court at Versailles. No less significant are the portrait miniatures and examples of goldsmiths' works, especially snuffboxes and watches. These accompany some exceptional 19th- and early 20th-century works. Among them are examples of Art Nouveau jewelry by René Lalique, jeweled objects by the House of Fabergé, including two Russian imperial Easter eggs and precious jewels by Tiffany and Co.