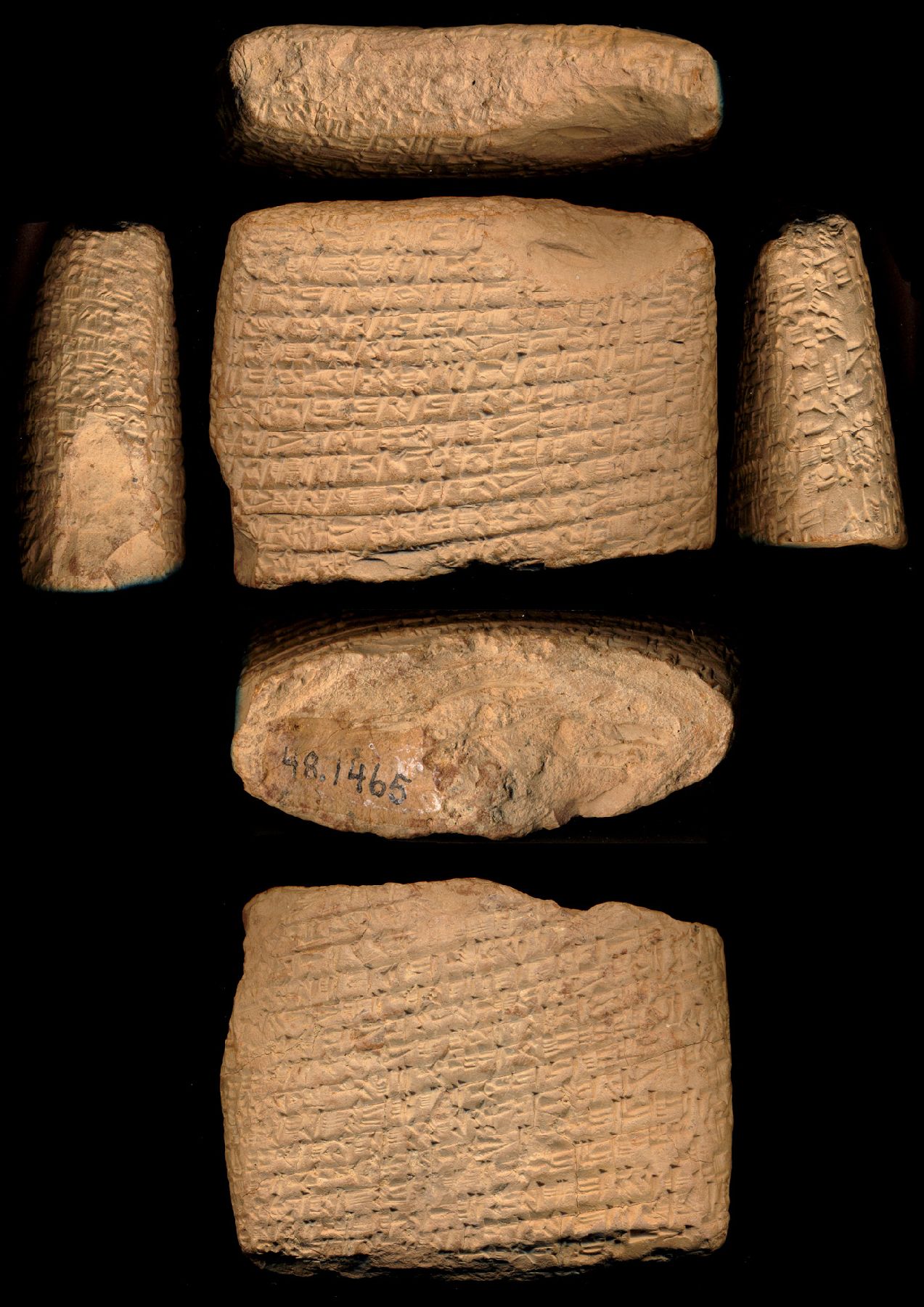 This thick rectangular clay tablet is broken at the bottom and damaged on its face, but is otherwise covered in cuneiform text. This complex text is a letter from Buzutaja in Kanesh to Puzur-šadue, Aššur-[...and], Pušuken in Assyria regarding the imprisonment of another man whom Buzutaja quotes in the letter. The author stresses that it was the decision of the plenary assembly of the colony to imprison the individual for cheating the colony in a sale of precious metals.

[Translation from composite text of Cuneiform Digital Library, M. Trolle Larsen. Festschrift Lubor Matous. Edited by Blahoslav Hruška,and Géza Komoróczy. Budapest: Eotvos Lorand Tudomanyegytem, 1978.] From Buzutaja to [...],/ Puzur-szadue, Aszszur-[...], Puszuken:/ Because of the [...] of the [man?]/ I confronted the city here and I got a tablet of the City/ addressed to the primary assembly of the colony, which they bring (it) to you./ Therefore you should listen to the tablet of the City,/ and you must confront the colony and (have it established) that it was the primary assembly of the colony,/ and not I, who threw him into jail./ My dear brothers, take care and (get hold of) a tablet/ of the Kanesz colony and a message from/ the Puruszaddum colony, indicating that he cheated the Kanesz colony and (sold?) the iron/ in Puruszhaddum. For that reason the primary assembly of the colony/ [threw him into jail?]. Take care [...]/[to] the palace [.../ [...]/ [which] I gave to the palace, and to the palace [...]/ held me back, and [...] 2 minas of silver to [...]/ live; and for the orders of the palace, when I stayed/ in jail you sold textiles for me./ When the iron and the textiles were sold in Aszszur-malik,/ Kurub-Isztar, his brother Aszszur-imitti, son of Ikkupija,/ Puzur-szadue and Aszszur-makik, son of Luzina, were my witnesses./ When the money was paid Ammurumbani, Szu-Kubum,/ son of Aszszur-bel-awatim, Aszszur-malik son of Alahum,/ Puzur-szadue and Aszszur-malik, son of Luzina,/ went up to the palace together with (me) and I paid the money:/ they are my witnesses. Seize the men and [lead them] to the Gate of the God/ [...] in accordance with /[...]/ [...]/ of the iron he brought./ (he) said: also, take the iron [...]/ of my partners [...] the iron [...]/ and I will take [...]/ I personally will [...] our gate [...]/ which I gave to him, Puzur-szadue [...]
[https://cdli.ucla.edu/P272901]