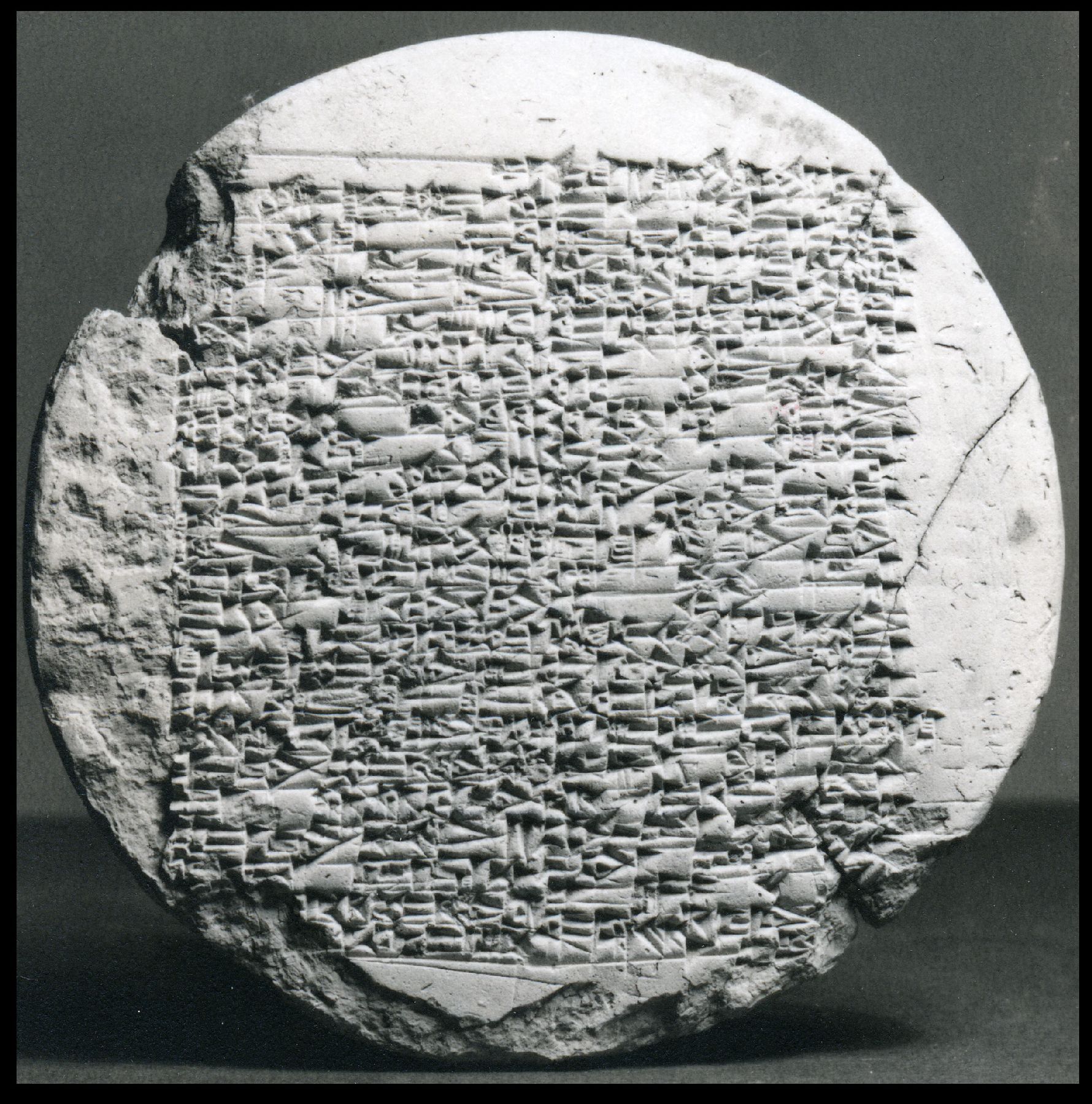 The focus of the very small, precise cuneiform characters of this large nail head is the renovation of the Dilmun Temple of the goddess Inanna (Ishtar) in Ur by Warad-Sin, ruler (lugal) of the city-state of Larsa. Warad-Sin hopes that the goddess will honor him with long-life and a long, secure reign. Although ruler of the city-state of Larsa, Warad-Sin claims control over a large territory, including the regions of Sumer and Akkad, and the cities of Nippur, Ur, Girsu, and Lagash (previously a rival city-state). Fewer than two dozen examples of this text are extant. Other examples of the text appear on the nail shafts, which may be an indication that the now-missing shaft of this nail was also inscribed.

Clay cones and nails were inscribed in the name of a ruler of a Mesopotamian city-state to commemorate an act of building or rebuilding, often of a temple for a specific deity. Deposited in the walls or under the foundations of these structures, the words of the texts were directed at the gods but would be found by later restorers. The text on the nail head of this example would have been visible if it had been driven into a wall like a nail.

[Translation from composite text of Cuneiform Digital Library RIME 4.02.13.27] For Inanna, / clad in great fearsomeness, / who clasps myriad divine powers, / great child of Suen, / his mistress, / I, Warad-Sin, / the obedient prince of Nippur, / provider of Ur, / who tends to Girsu / and the whole state of Lagash, / who reveres the Ebabbar, / the king of Larsa / and king of Sumer and Akkad, / the youth who seeks out the (divine) instructions / and perfects the divine plans, / who the temples of the gods / renovated / and who great statues / that demonstrate his kingship / did erect in grand fashion, / who its dilapidated cities / and its walls rebuilt / by whom the ones of his wide land / were made to dwell in peaceful houses, / reverent one who / returned the troops to (my) control / the wide wisdom / to fashion eternal works, / having been given to me by the god Enki, / therefore, in order that Inanna my mistress, / as I was making beautiful words, / the Dilmun Temple, / her relaxing residence / of happiness / might experience, / whose interior is full of jubilation / when more than before / its Eshusiga / I had widened, / for far future days / for my life I built it / and raised up its top / and made it grow forth like a mountain range. /
For these things that I have done / may Inanna my mistress / rejoice over me. / Long days (of life), years of abundance, / a throne with a secure foundation, / and a scepter which makes people bow down / may she present to me.
[https://cdli.ucla.edu/P272904]