The impressed cuneiform characters, which are well-spaced in the horizontal registers on the shaft of this votive nail, record in Sumerian the building of a temple to Gatumdu, a mother goddess local to Lagash, by Gudea, ensi of Lagash. The text indicates that the temple was built in an area here translated as the “Holy City,” but this was probably a precinct of or another name for the city of Lagash itself. Gudea, who ordered the building of the temple, ruled over the city-state of Lagash (in southern Iraq) in the second half of the 22nd century BCE (ca. 2144-2124 BCE). Fewer than one hundred examples of this text are known, appearing on nails and bricks, and the Walters Art Museum has two of those examples (this nail and 48.1461). 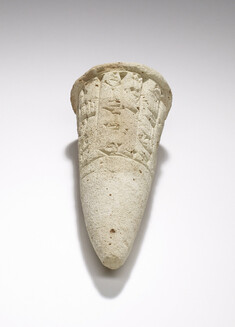