The designs on these three urns are decorated with scenes showing Apollo, nymphs, and cupid. They were made at the factory of William Adams, a contemporary, friend and follower of Josiah Wedgwood. Adams was associated with Wedgwood when he opened his famous factory at Etruria in 1769. He experimented with pottery and fitted up a private laboratory at his house at Tunstall, where he continued his research in the chemistry of pottery to the end of his life.
Adams was responsible for a great quantity of excellent jasper ware, in some of which the ground colors differ perceptibly from that made at the Wedgwood factories.
This vase is one of a group of three with 48.858 and 48.859, although it is slightly larger than this pair. 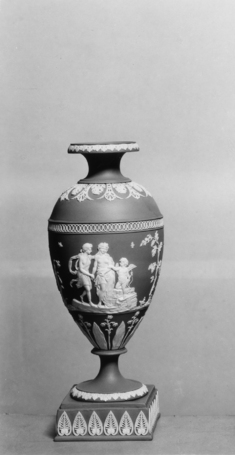 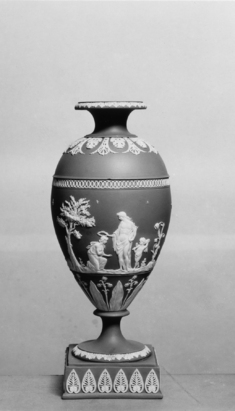