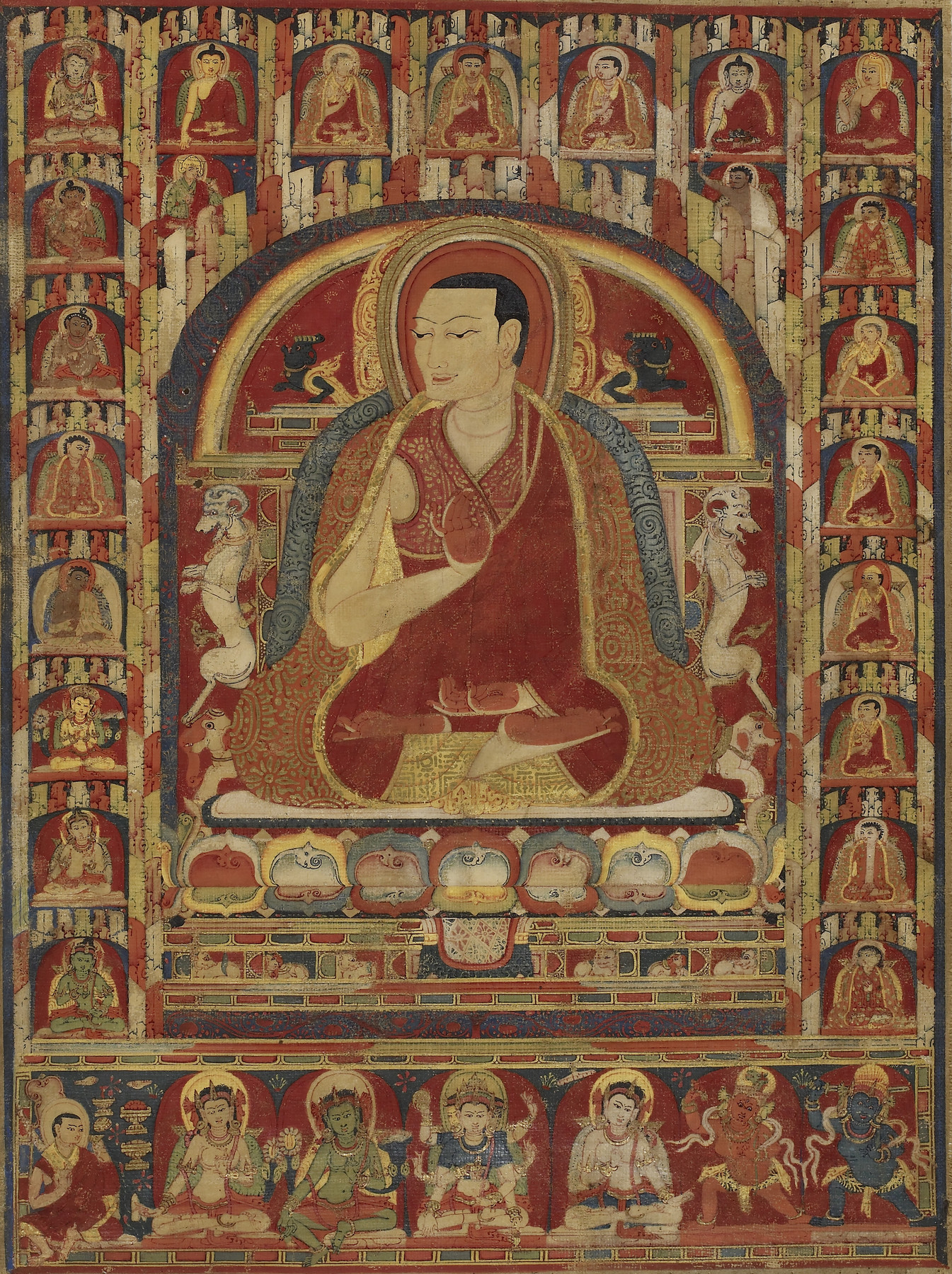 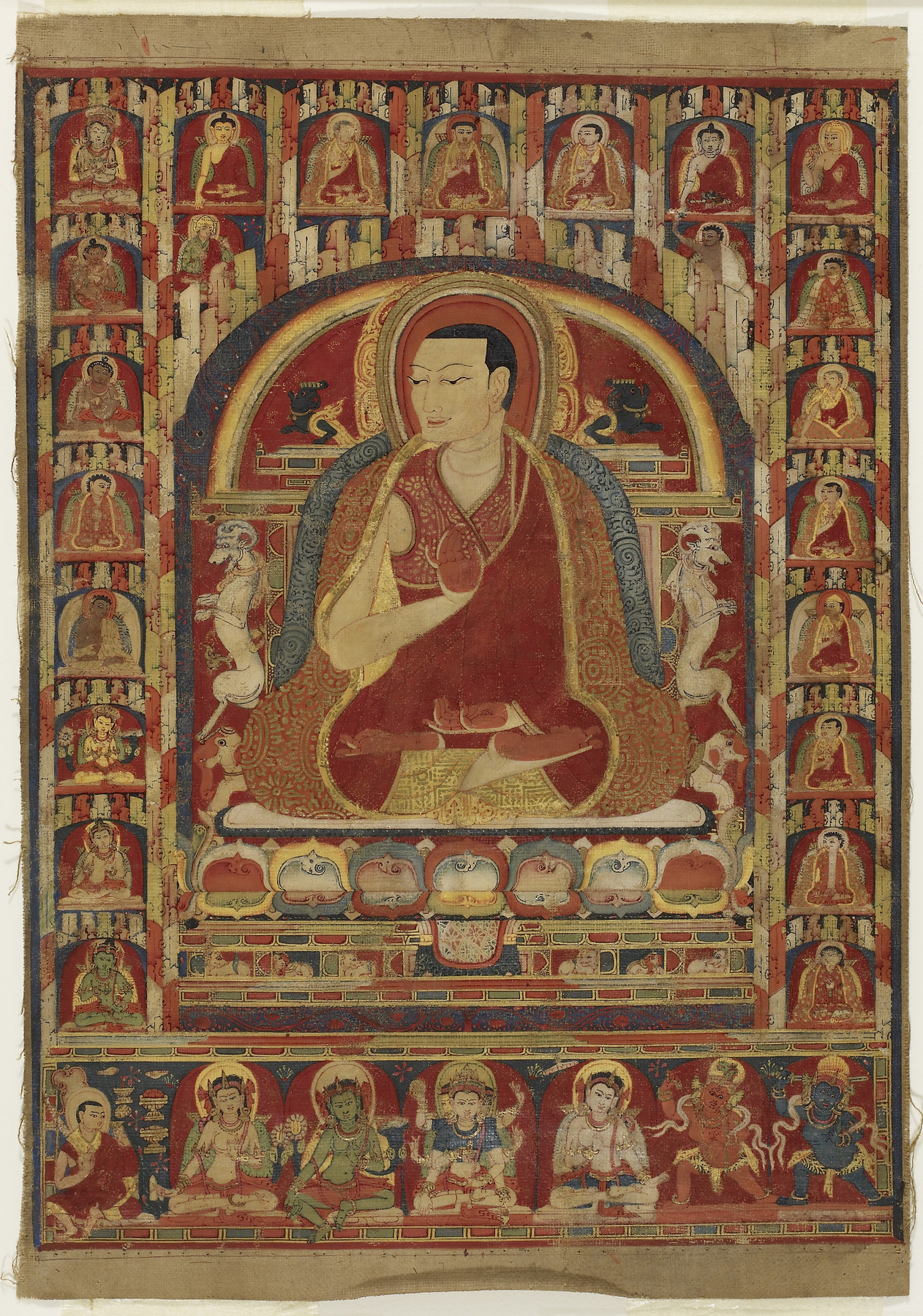 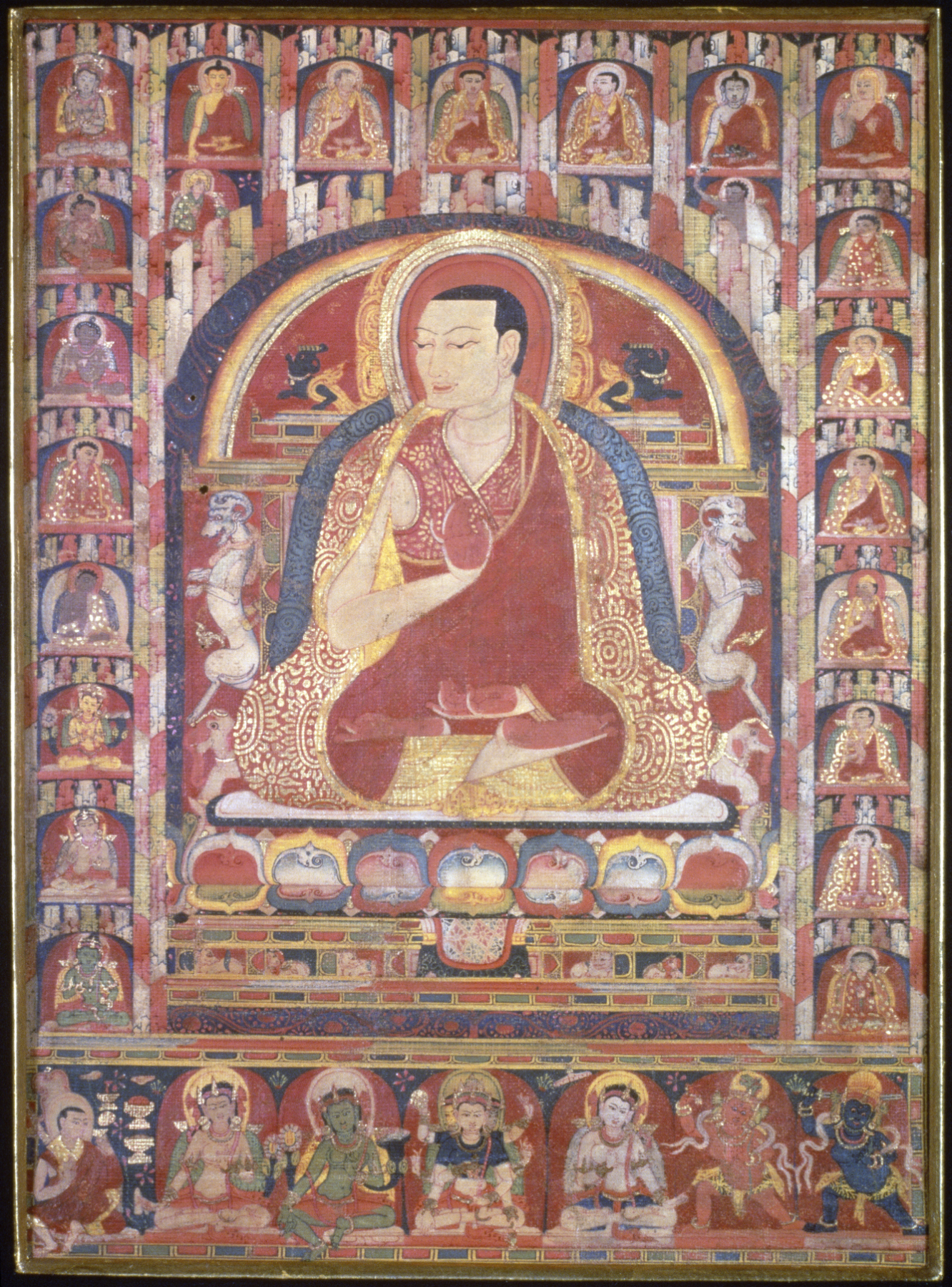 This painting commemorates Kuyalwa (1191–1236), the second abbot of Taklung Monastery in central Tibet, home to a prominent branch of the Kagyu Buddhist monastic tradition. Kuyalwa sits on a lotus throne at the center and raises his right hand in the gesture of reassurance. The figures surrounding him include members of three teacher-student lineages, who transmitted the sacred knowledge and rituals that were taught and practiced at Taklung.

Directly above Kuyalwa is his teacher, Tashi Pal (1142–1210), the first abbot of Taklung. He is flanked by the previous two teachers, Phagmotrupa Dorje Gyalpo (1110–1170) and Gampopa (1079–1153). Gampopa, to Tashi Pal’s right (viewer’s left), received the teachings of three lineages. One begins in the painting’s upper left corner, with the primordial Buddha Vajradhara, followed below him by the four great masters who preceded Gampopa: the mahasiddhas Tilopa, Naropa, Marpa, and Milarepa. In the painting’s upper right corner, a second lineage begins with Atisha, wearing a yellow hat, and continues with three additional teachers. The remaining figures on the right side, beginning with a lama wearing a smaller yellow hat, belong to the third lineage.

The patron of the painting, depicted in the lower left corner, belongs to the generation at Talkung that received teachings from Kuyalwa. He is probably Sanggye Yarjon (1203–1272), the third abbot of the monastery, who is named last in the lineage recorded in an inscription on the back.

Consecratory inscriptions on back of thangka, in Sanskrit and Tibetan, written in Tibetan scripts. Central inscription, written in the shape of a chorten, includes Sanskrit names of lineage of teachers for Taklung monastery, from Vajradhara to Sangye Yarjon ("Prajnaguru"). Published in P. Pal, "Tibet: Tradition and Change" (p. 51, Singer trans.) and in P. Pal, "Desire and Devotion: Art from India, Nepal, and Tibet in the John and Berthe Ford Collection" (pp. 232 and 330, Templeman and Lhalungpa trans.).