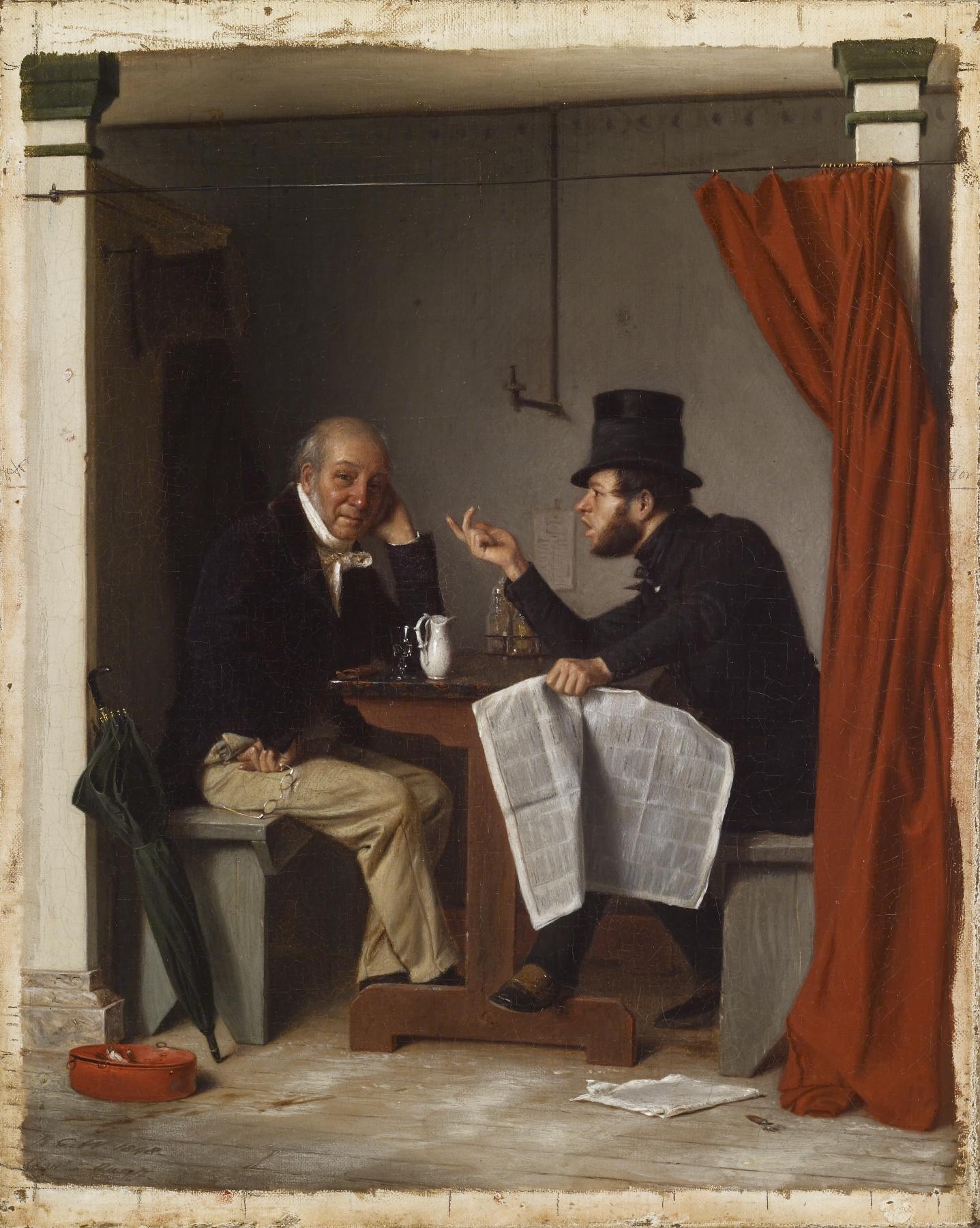 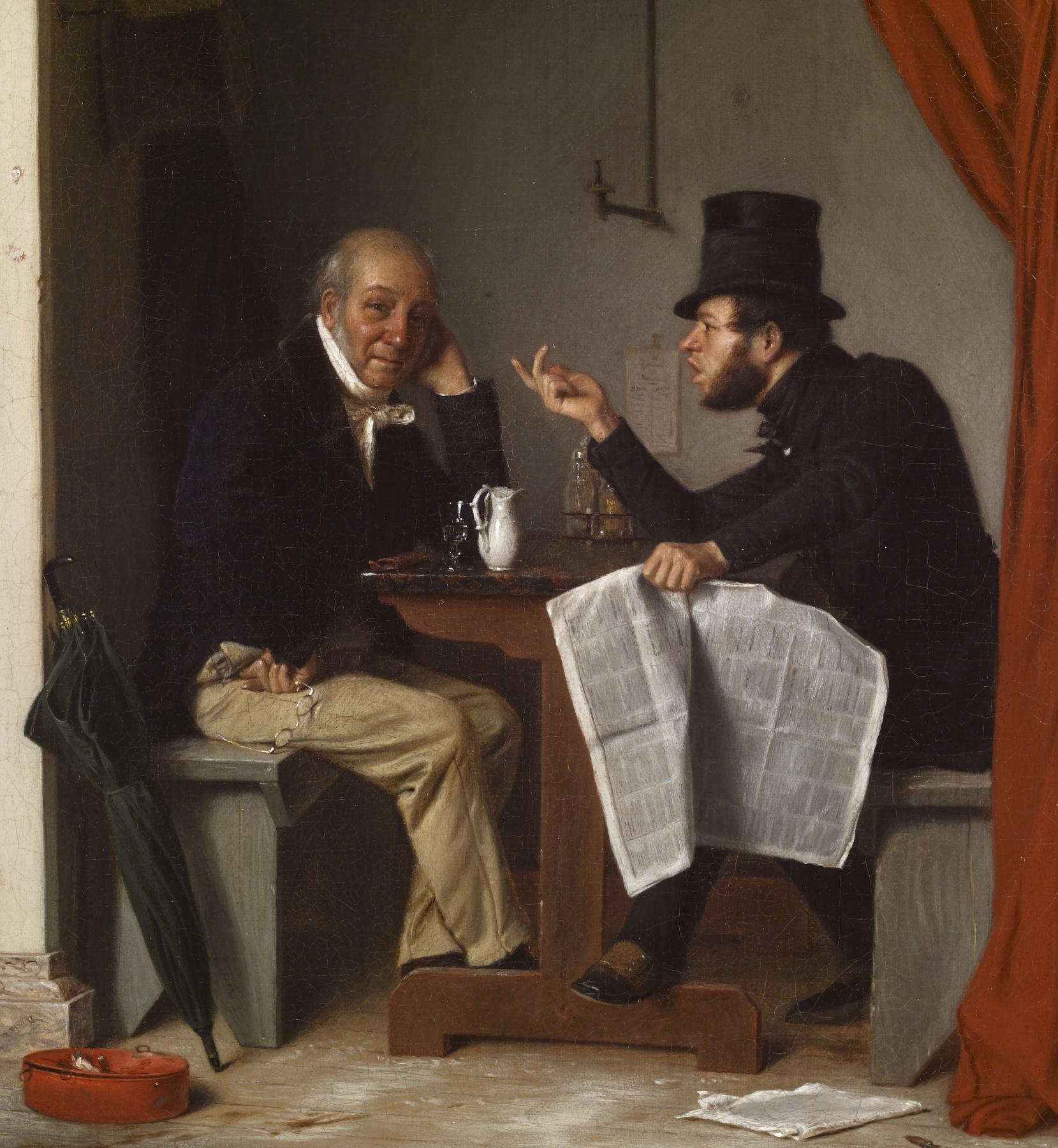 Politics in an Oyster House

Woodville adopted the subject of newspaper reading seen in works by his Düsseldorf contemporaries Johann Peter Hasenclever and Wilhelm Kleinenbroich, placing it in a distinctly American interior, described by a contemporary critic as "one of those subterranean temples devoted to the immolation of bivalves . . . vulgarly known as oyster cellars." After their meal, the younger of the two figures, bearded and wearing his top hat indoors, leans across the table, counting arguments off on the fingers of one hand and clasping the newspaper that fuels his opinions in the other. The older man, balding, ruddy-faced, and red-nosed, warmed by the liquor in his half-empty glass, looks out with amusement at the viewer. The booth in which they are seated, with its red privacy curtain pulled aside, creates a shallow proscenium stage for this scene of intergenerational argument. The characters are engaged with the politics of their time, on which Woodville, characteristically, takes no stand. The foreground details of recognizable objects - the red spittoon, the umbrella, the penny newspaper, and the discarded "segar" stub - set this drama squarely in contemporary times.

This small-scale cabinet picture was painted for prominent Baltimore citizen John H. B. Latrobe. Latrobe might have commissioned it in person on his Grand Tour of Europe, which took him "down the Rhine" in 1847. After shipment to New York for a brief exhibition at the American Art-Union, it was delivered to Latrobe's residence in Baltimore on May 29, 1848, with a note from William Woodville V, the artist's father, saying "Caton desires me to say to you, that if you do not like it, you must not hesitate about returning it to me, and he will, with the greatest pleasure, paint another for you." Apparently, the painting pleased Latrobe a great deal; he loaned it to the first annual exhibition of paintings at the Maryland Historical Society, and it hung in the parlor of his home at Charles and Read Streets until the death of his widow in 1905.
Woodville exhibited a copy of this work with the title A New York Communist Advancing an Argument to some acclaim at the Royal Academy in London, where he was then resident, in 1852. A woodblock print of the painting illustrated the review of the exhibition in The Illustrated London News, which called it "a spirited little piece . . . of more than ordinary merit." The lithograph of the picture, produced by Fanoli, printed by Lemercier, and distributed by Goupil & Co. included a "dedication to John H. B. Latrobe, Esq." (see fig. 38 and checklist no. 21). It was offered in a full-page advertisement, along with several prints after works by William Sidney Mount, in the December 21, 1850, issue of The Literary World as "a most exquisite representation of American politicians." 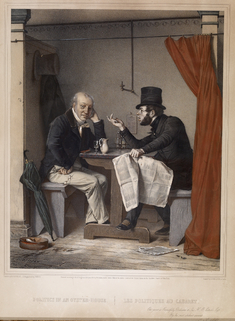 Politics in an Oyster House Dedicated To H.B. Latrobe Esq.