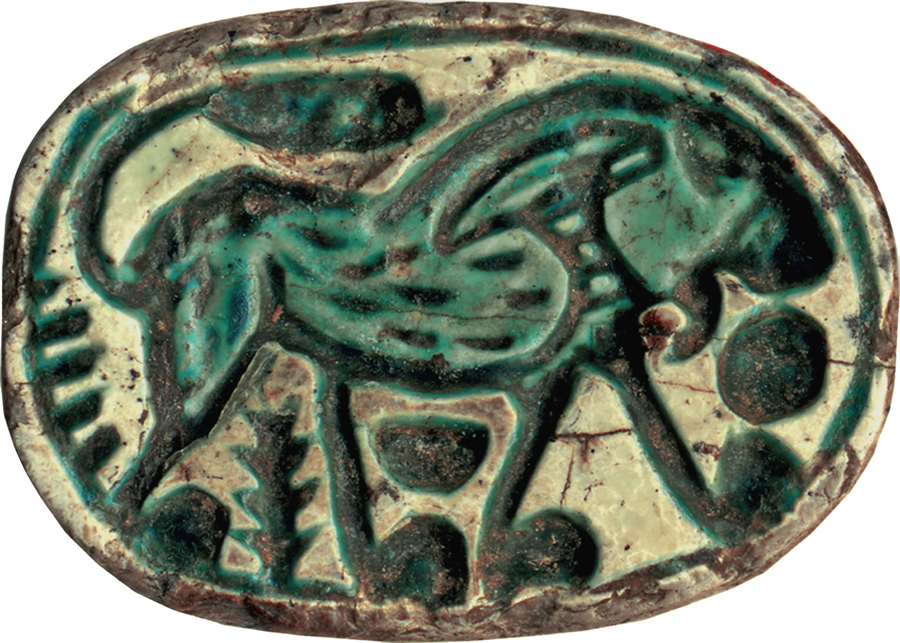 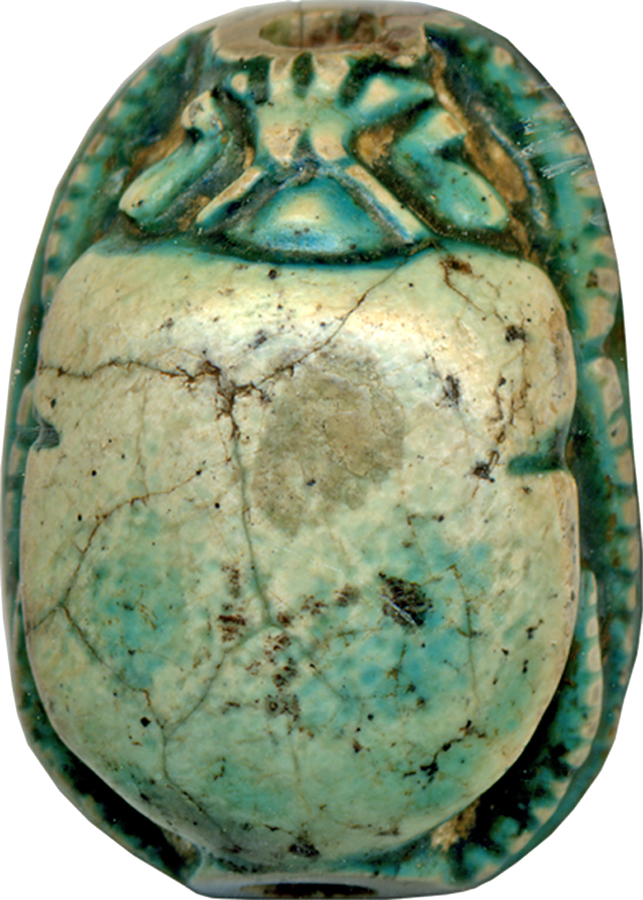 The ancient Egyptians believed that the dung beetle, the Scarabaeus sacer, was one of the manifestations of the sun god. Representations of these beetles were used as amulets, and for ritual or administrative purposes

This scarab displays on its bottom the motif of a walking lion. The mouth of the animal is wide open and the tail raised upon its back. A sun disk appears below its head, an nb-basket below its belly, a bush between its hindlegs, and further floral elements behind its body. The lion figure fills nearly the whole space; only in front, between, and behind its extremities is some space to convey the environment. The figure of the lion has a short body, a large head, and slim legs with very large paws. The size and round shape of these paws correspond to the form of the sun disk. The layout is balanced and tightly packed, the figure of the lion and the other elements fill the whole space, and there is empty space only between the frontlegs of the lion. The head of the lion is on the bottom of the head segment of the scarab. The highest point of the back is the pronotum (dorsal plate of the prothorax). Two side-notches at shoulder height, which differ in depth and are not totally aligned, define the partition between pronotum and elytron (wing cases). The triangular head has incised borderlines; the irregular side plates have side-notches, and the four times serrated clypeus a short central base notch. The raise extremities have natural form, and diagonal hatch lines for the tibial teeth and pilosity (hair); the background is deeply hollowed out. The oval base is symmetrical, and the drill-hole openings framed.

The scarab is longitudinally pierced, was originally mounted or threaded, and functioned as a protective amulet with royal connotation. Particularly, it refers to divine royal power (lion) and solar presence (sun disc) as a life spending force (plants), and should assure protection and renewal for its owner. There are several parallels for this motif on the bottom of scarabs. The type with an open mouth is typical for examples from Palestine. Lion icons have royal and heavenly connotations, and the sub-icons specify or modify the exact meaning.