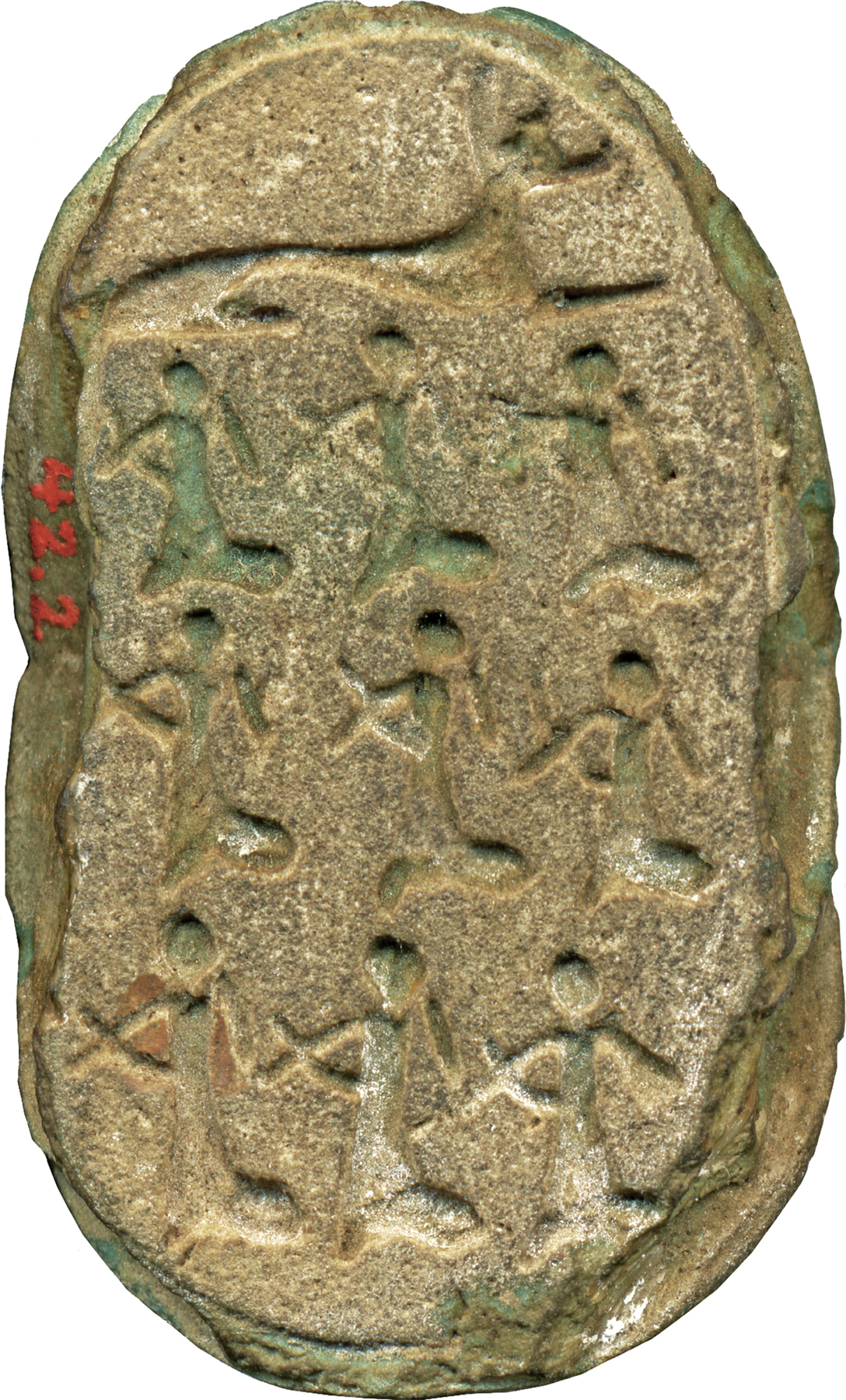 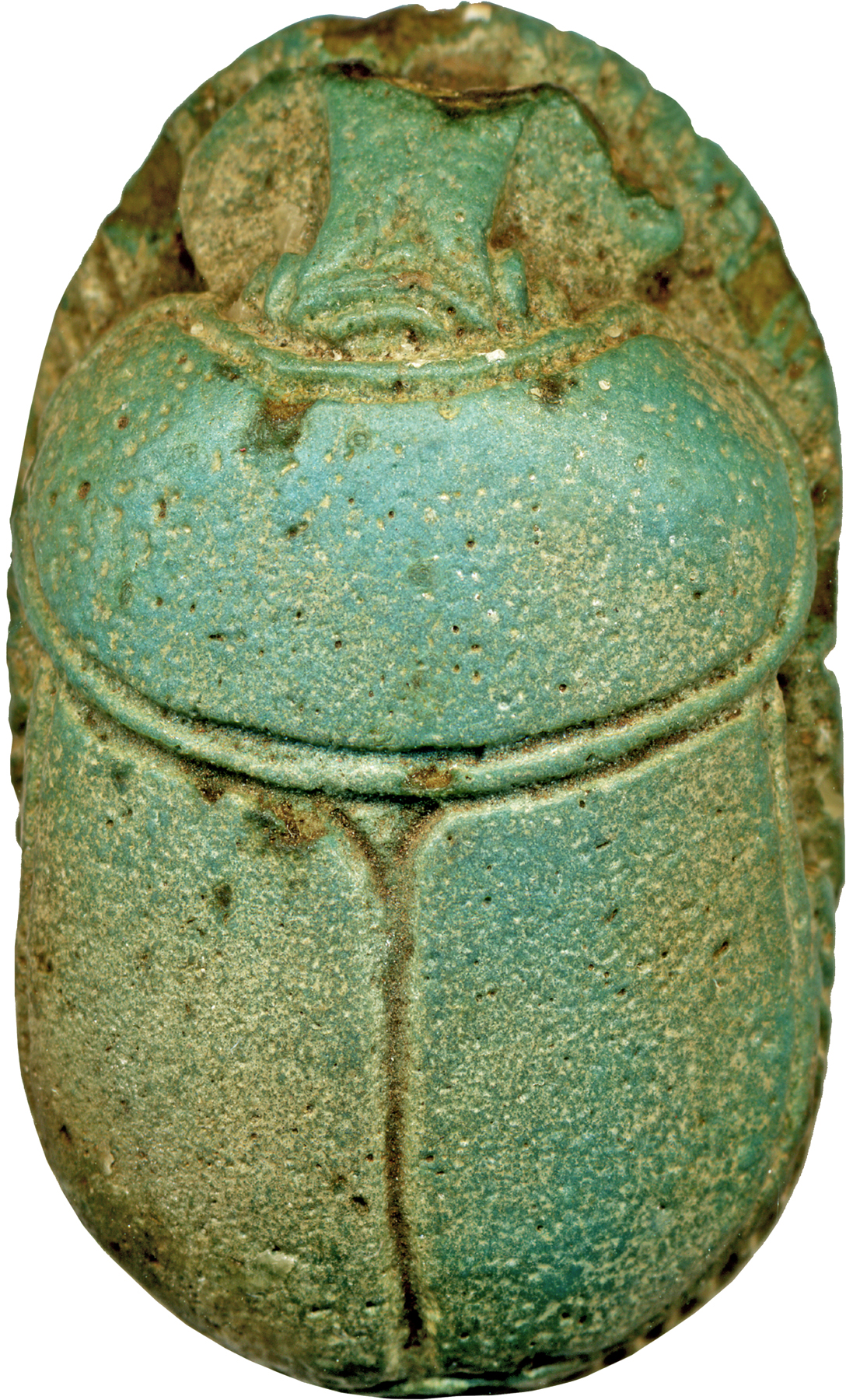 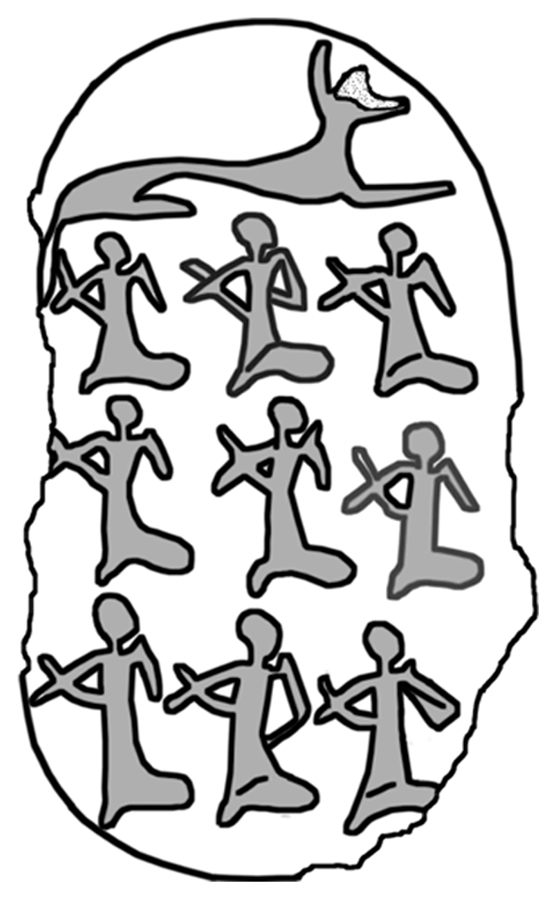 The bottom of this scarab displays a motif that combines the figure of a jackal with nine captives. The reclining jackal's head is raised, and his tail hanging down. Below his body are nine prisoners in three rows depicted; they are kneeling on the ground with their arms fettered behind their backs. The jackal is the dominant icon in the composition according to his size and superior position. The slim figures of the prisoners are not intended to represent individual persons, but a group; all have the same posture and are placed in a symmetrical order; only the position of the fettered arms shows minor variations. An oval line frames the motif.
The highest point of the back is the pronotum (dorsal plate of the prothorax). Pronotum and elytron (wing cases) have incised borderlines, a double, curved partition line, and one division line between the wing cases with a scutellum (small central triangle) at the upper end. The semicircular head is flanked by quarter-ovoid eyes; the side plates are quarter-circular, and the clypeus (front plate) has two central base notches. The raised extremities have natural form, as well as diagonal (hindlegs) and vertical (frontlegs) hatch notches on the upper sides for tibial teeth and pilosity (hair). The proportions of the top are slightly unbalanced, the elytron short, and the clypeus and plates very large in comparison to the small head. The base has a symmetrical long-oval shape.

The scarab is longitudinally pierced, was originally mounted or threaded, and used as an institutional, funerary amulet. The motif on the bottom represents the administrative seal of the Thebes' necropolis, but was also used in other cemeteries. Nevertheless, the faience material makes it doubtful that the scarab was really used as an official seal. It seems more likely that the scarab was used as a protective funerary amulet that should guarantee the security of the tomb in this world, and be effective against dangers in the afterlife. This seal was used since the late 18th Dynasty; comparable seal impressions were found e.g. in the tomb of king Tutankhamen, and a seal matrix made of faience is today in the Myers Museum at the Eton College.