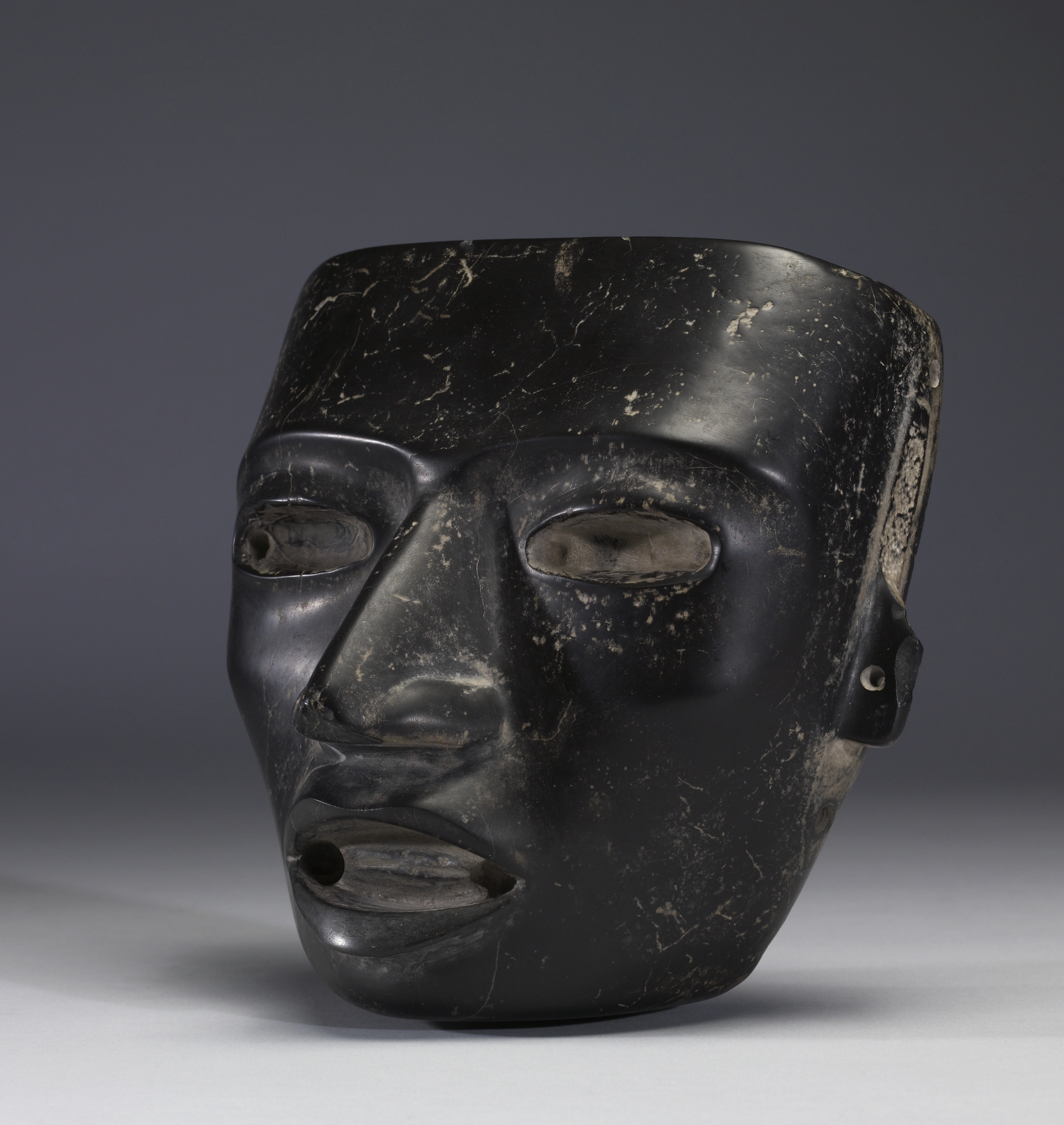 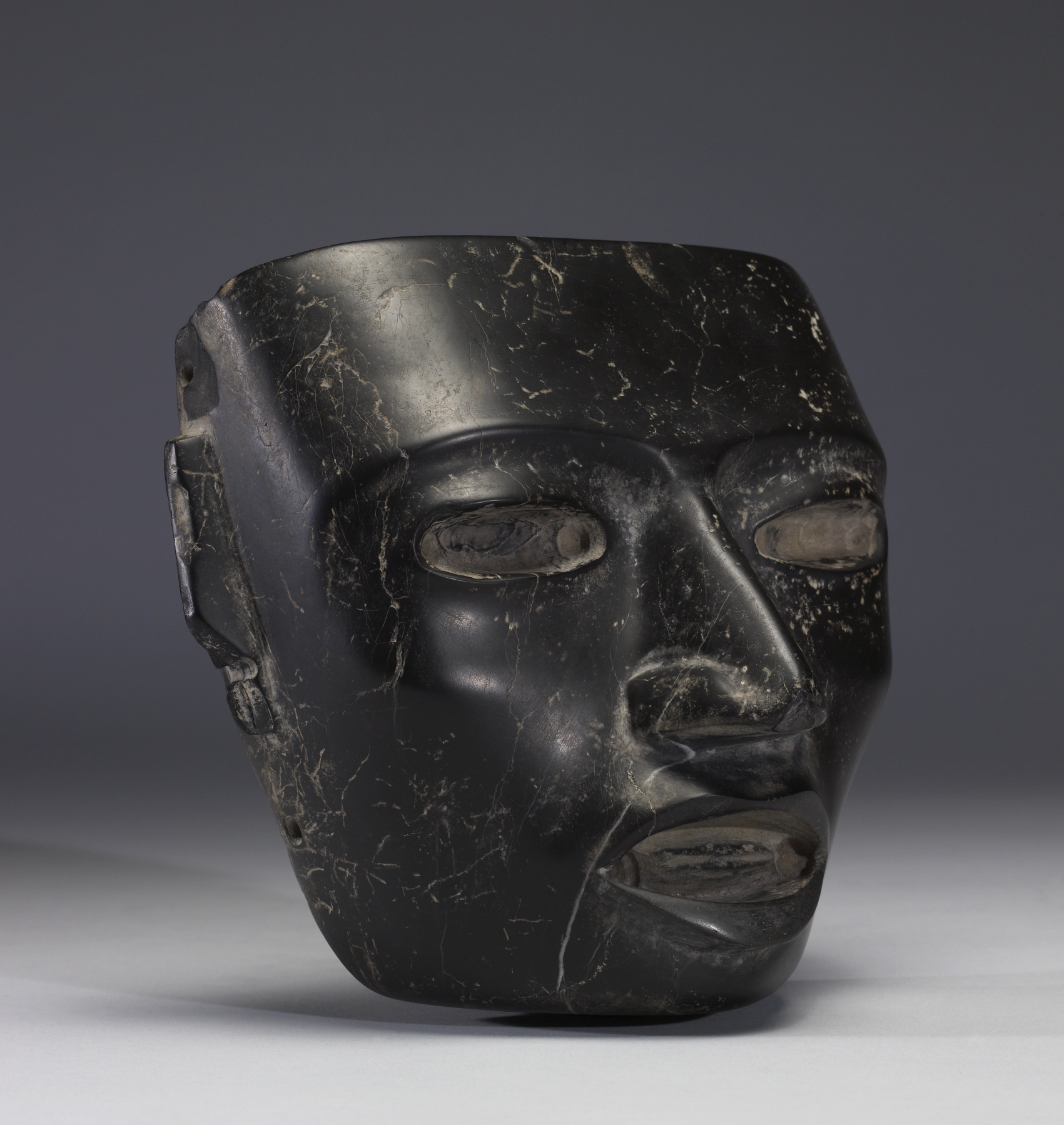 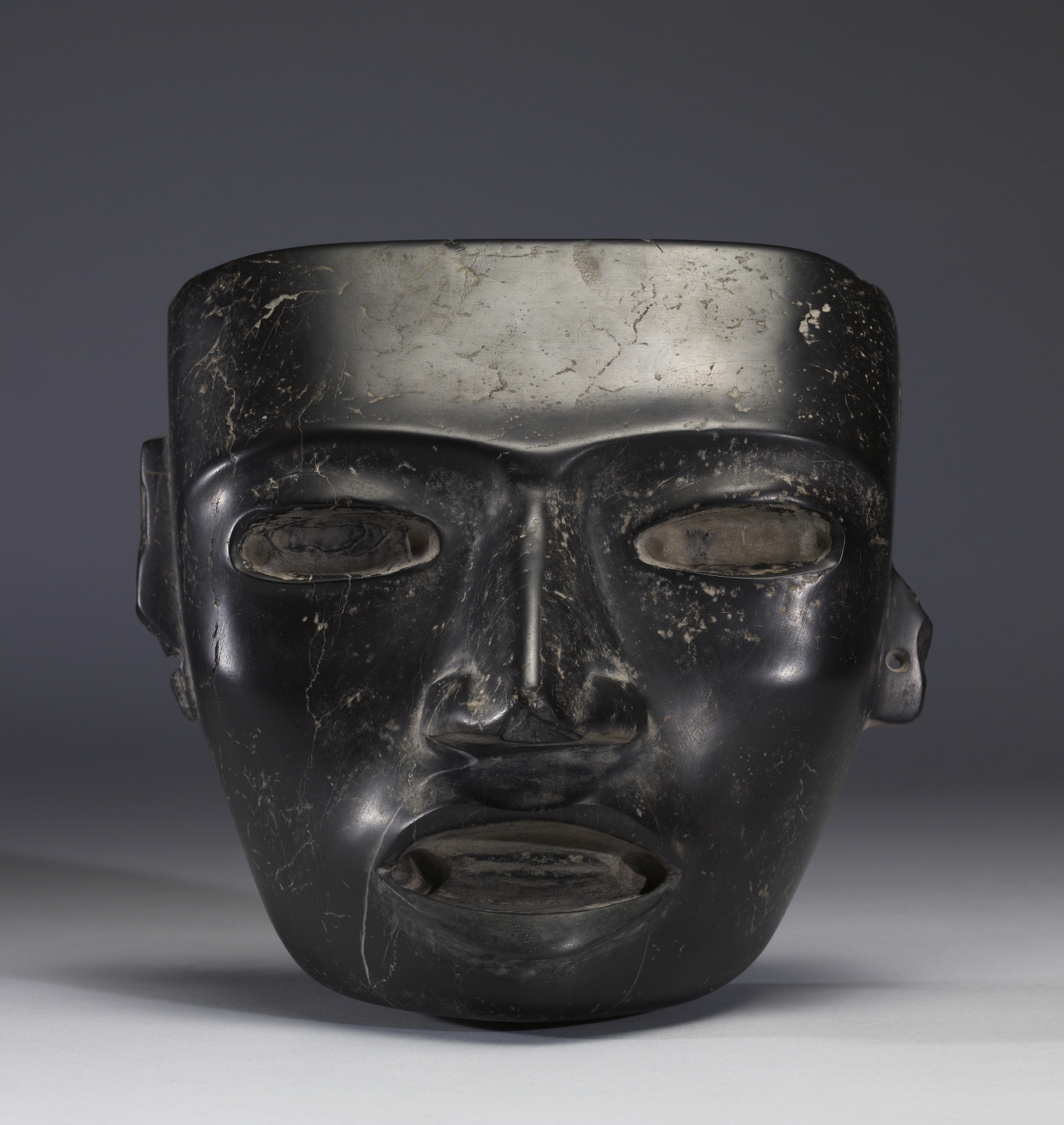 This black limestone mask was carved by artists of the Teotihuacan culture, centered at the ruined city of the same name in central Mexico. Ancient Teotihuacanos fashioned masks in many mediums and at various scales, from miniature ceramic works to over life-sized stone versions, such as the present example. Although this mask was hollowed out on the back, the eyes were not prepared for viewing. Instead they were partly drilled and originally inlaid with some kind of contrastive medium, like shell, obsidian, magnetite, or pyrite. The fact that one cannot see through the eyes has led researchers to propose that masks like this were not worn as costume elements by the living. Instead, most writers believe that they were likely tied to mummy bundles or deity effigies. The four drill holes found on this mask, at each temple and below the ears, were used to affix it to such a bundle. The ear-like flanges are also drilled, and would have originally had earrings pendant.

Along with feathers and beads, masks were one of the most common costume elements of ancient Mesoamerican elites. The reason has to do with the fact that ancient Amerindian belief, as we now understand it, was rooted in the ability of religious specialists---priests or perhaps even shamans, to tap the power of the world of the gods and ancestors. Like all Native Americans, the ancient Teotihuacanos lived in a world of lesser and greater spirits or deities. A major class of supernatural characters included those associated with nature, natural processes, and the landscape: rain, agriculture, the sun, moon, seasons, and the stars. More hierarchical societies like Maya, Aztec and Teotihuacan, added deities associated with the ruling class. Chiefs and kings and their families counted on the support of patron deities and they were figured prominently in the visual arts.

The people of Teotihuacan and other ancient Americans believed that wearing masks and costumes could actually effect a transformation, or an assimilation of the individual's identity with that of the deity, ancestor, or animal featured on the mask. Modern Westerners associate impersonation with theater, Halloween, and make believe. Although we do find masks arresting, few of us actually think that they transform their wearers. But the Mayas and other Native-American peoples did believe in masked transformation.

This mask does not portray a known deity in the Teotihuacan pantheon. Instead it represents a generic type, perhaps an ideal elite Teotihuacan man. The blank look, large nose, prominent cheekbones, and drooping lip should be understood as artistic conventions, rather than an attempt at likeness as portraiture.