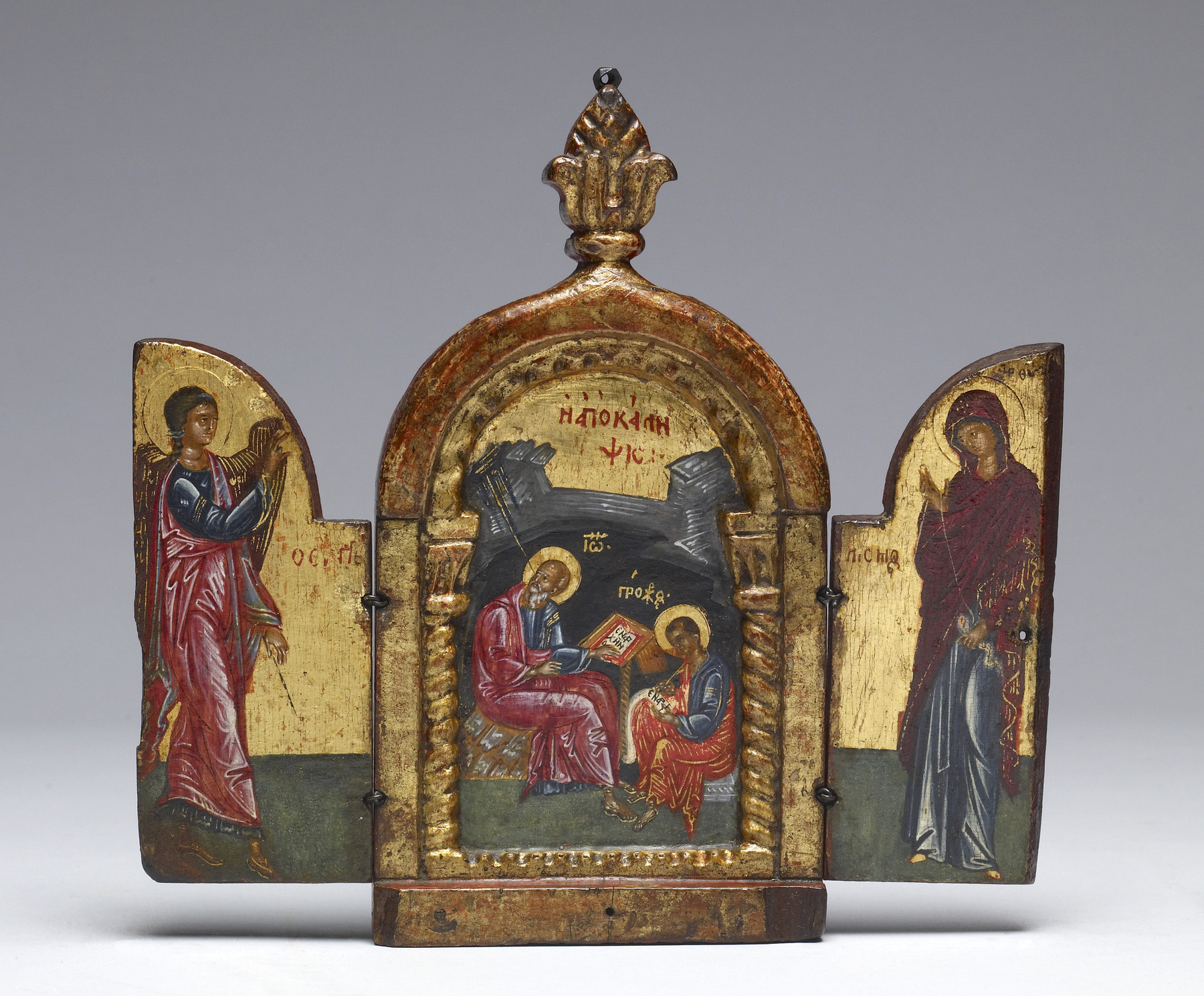 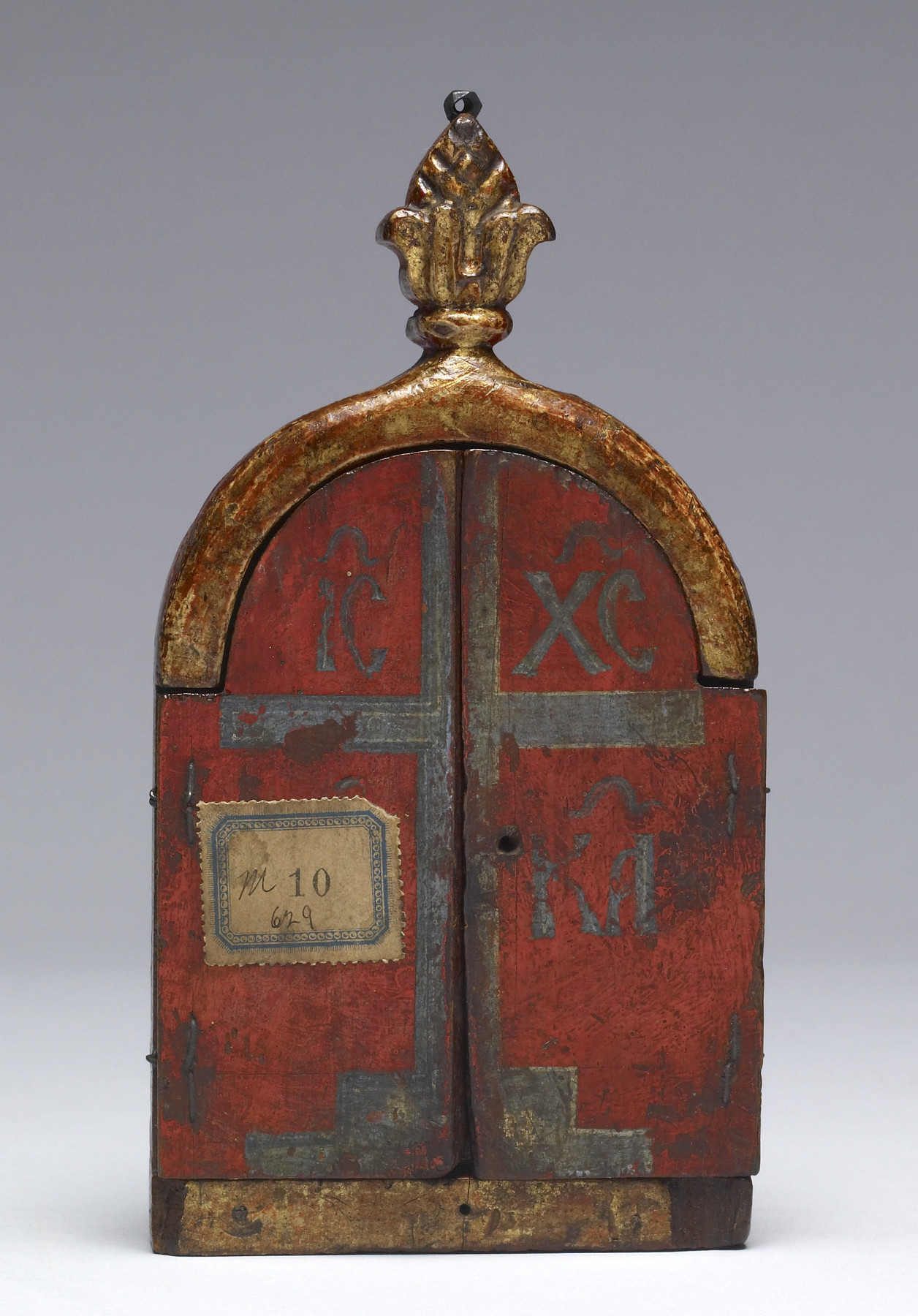 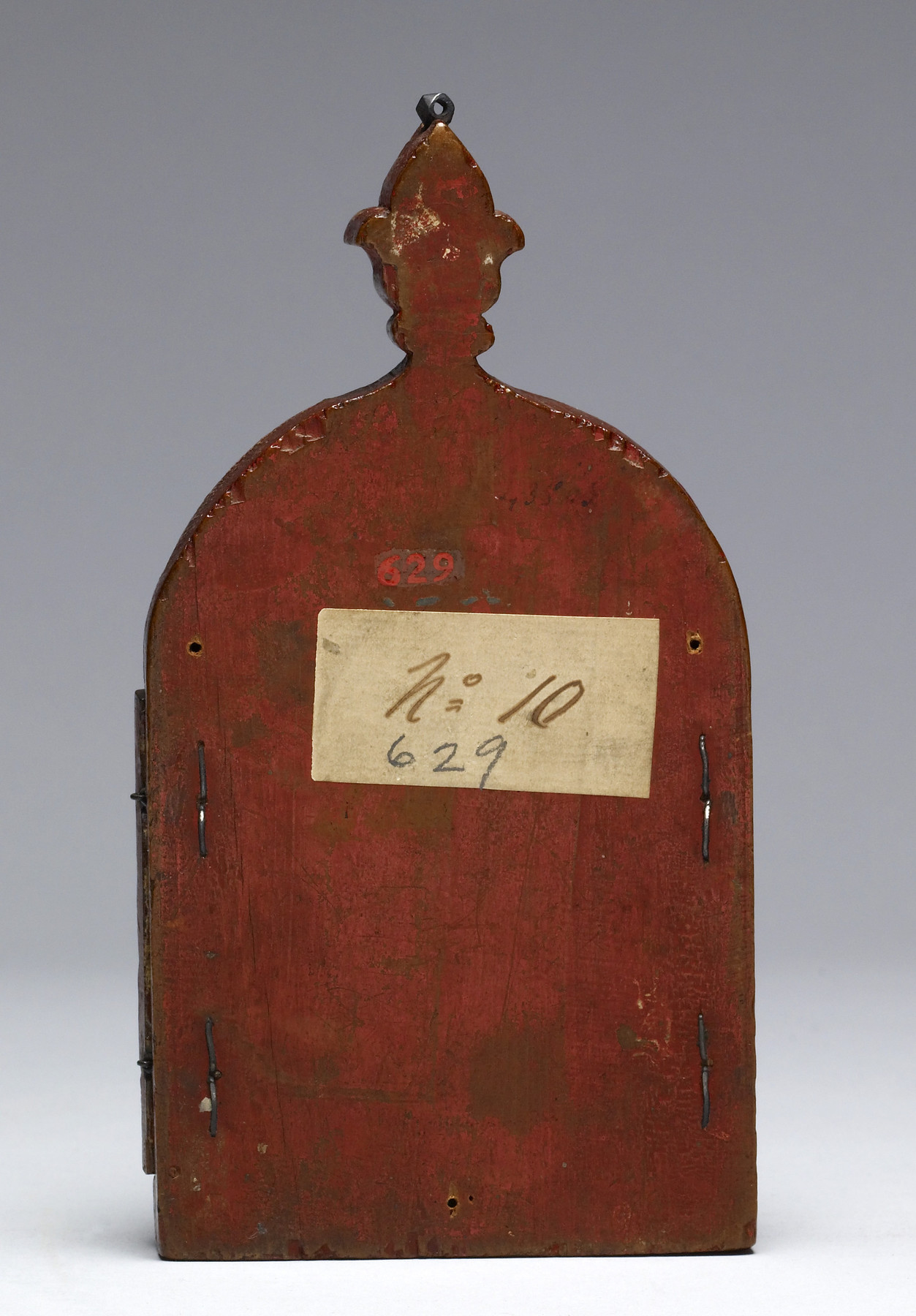 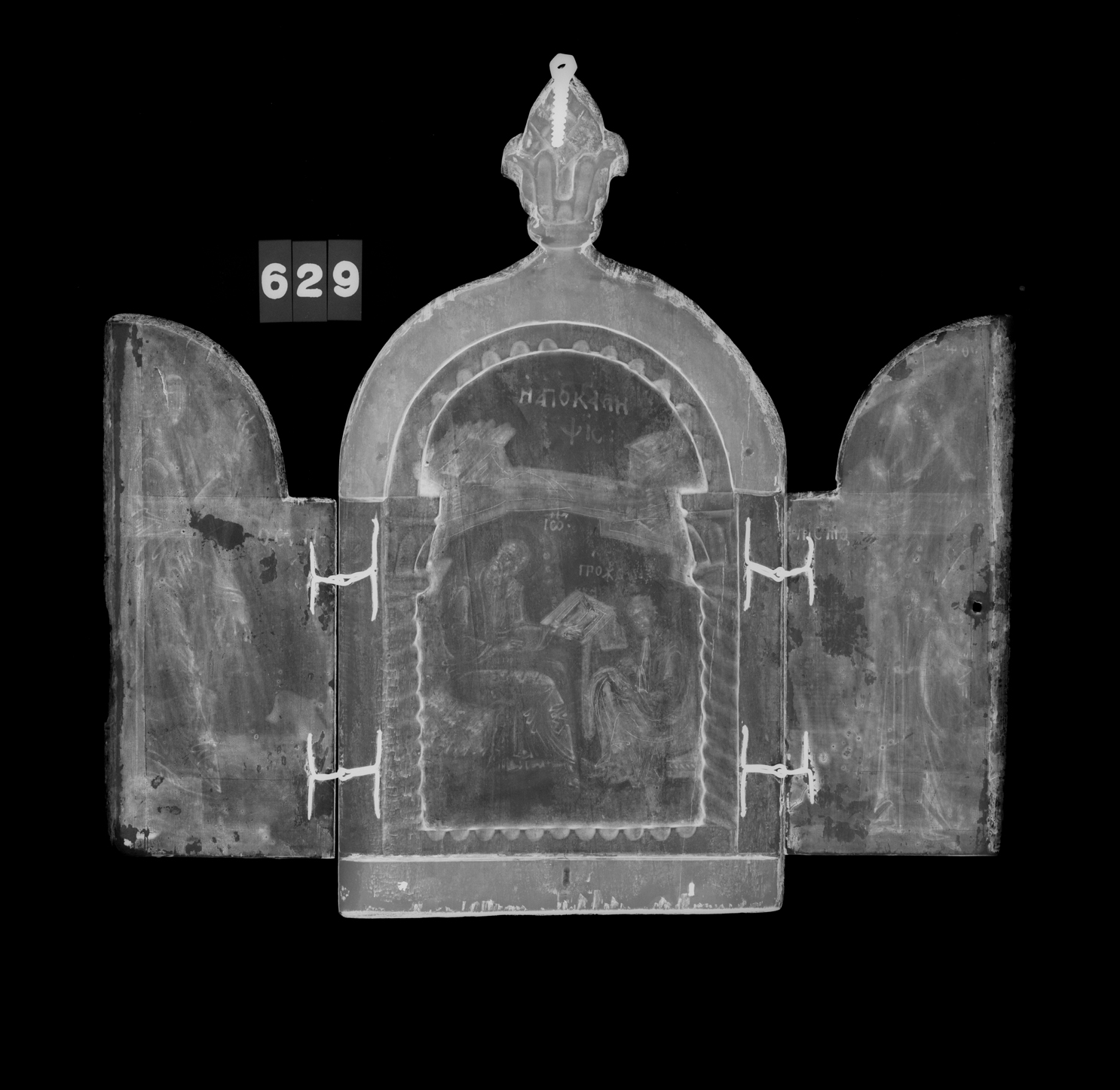 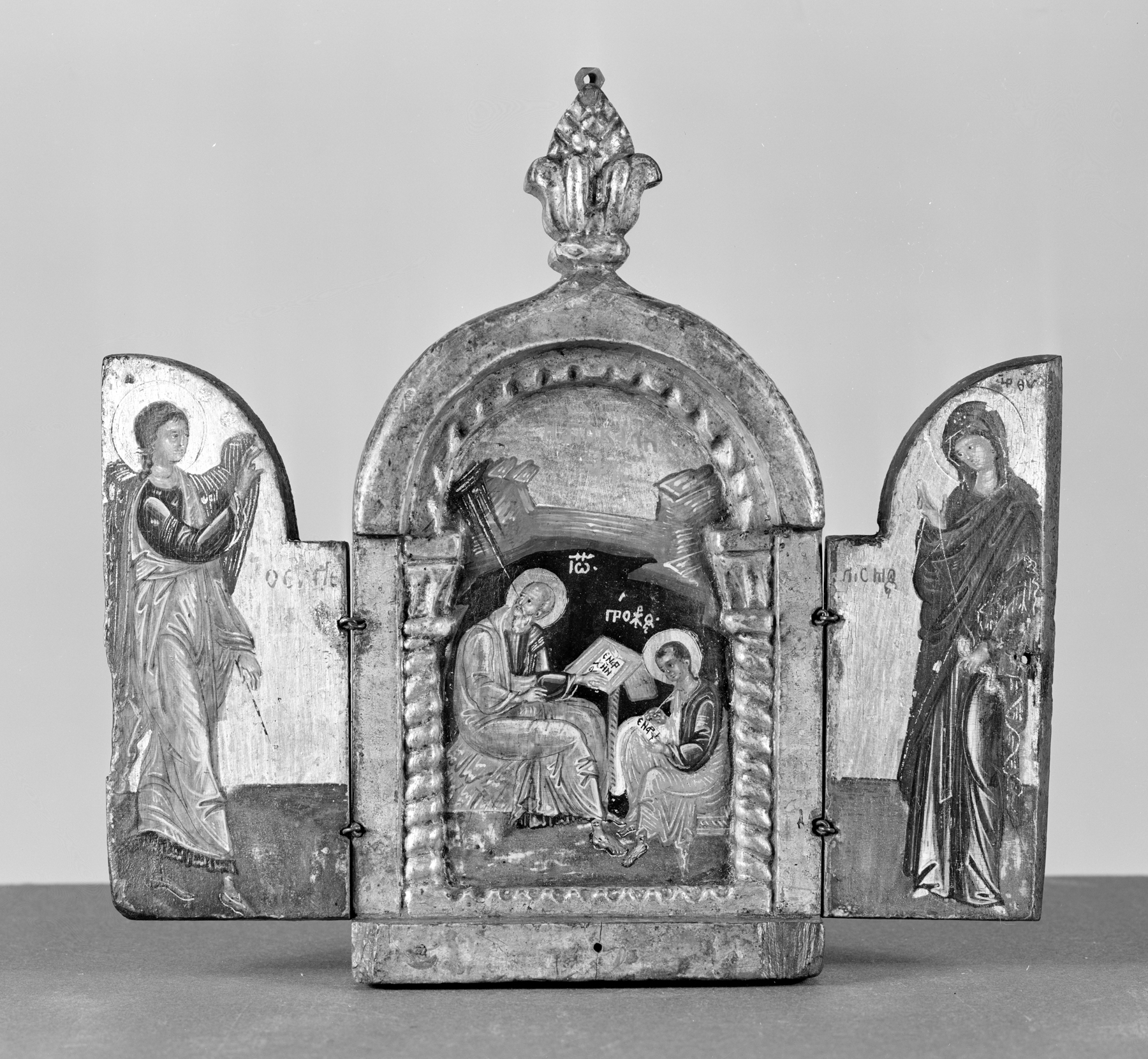 Saint John the Evangelist Dictating to Prochorus; the Annunciation

At the center of this small-scale triptych, Saint John and the deacon Prochorus sit in a cave on the island of Patmos where John transcribed the Book of Revelation. With one hand on his text, John looks over his shoulder to receive the Word of God from heaven above. The saint conveys the text inscribed on the page, “In the beginning was [the Word],” to Prochorus, who copies it onto a scroll. This is the opening line of the Gospel of John, also composed by the Evangelist. The outer wings depict the Annunciation, when the Archangel Gabriel, at left, told the Virgin Mary, at right, that she would give birth to Christ. The angel blesses Mary, and she raises her right hand in acceptance of his message. Their gestures and direct eye contact suggest that they converse across the painting. The Virgin also holds a thread that she spins from the hank of wool in her left hand. This detail alludes to a story from the apocryphal Protoevangelium of James, which describes how Mary was among eight virgins selected to weave cloth for the Temple veil. When the Archangel arrived to deliver his message to the Virgin, he found her spinning the purple thread assigned to her. This scene of Mary spinning appears frequently in Byzantine art, both in grand frescoes and mosaics found in churches, and in smaller panel paintings and illuminated manuscripts. The diminutive size of this triptych indicates that it was used for individual, private devotion. The hinged wings fold inward over the central panel, making it compact and portable. The outside of the wings are painted with a large cross that spans the two wings, set against a red background. The abbreviation for “Jesus Christ is victorious” (IC XC NIKA) is written above and below the arms of the cross.

[Transliteration] Top of central panel: He Apokalepsis; [Translation] The Revelation; [Inscription] On back of wings, partially covered by sticker: IC XC NI KA; [Translation] Jesus Christ Is Victorious; [Sticker] On back of left wing: M 10 / 629