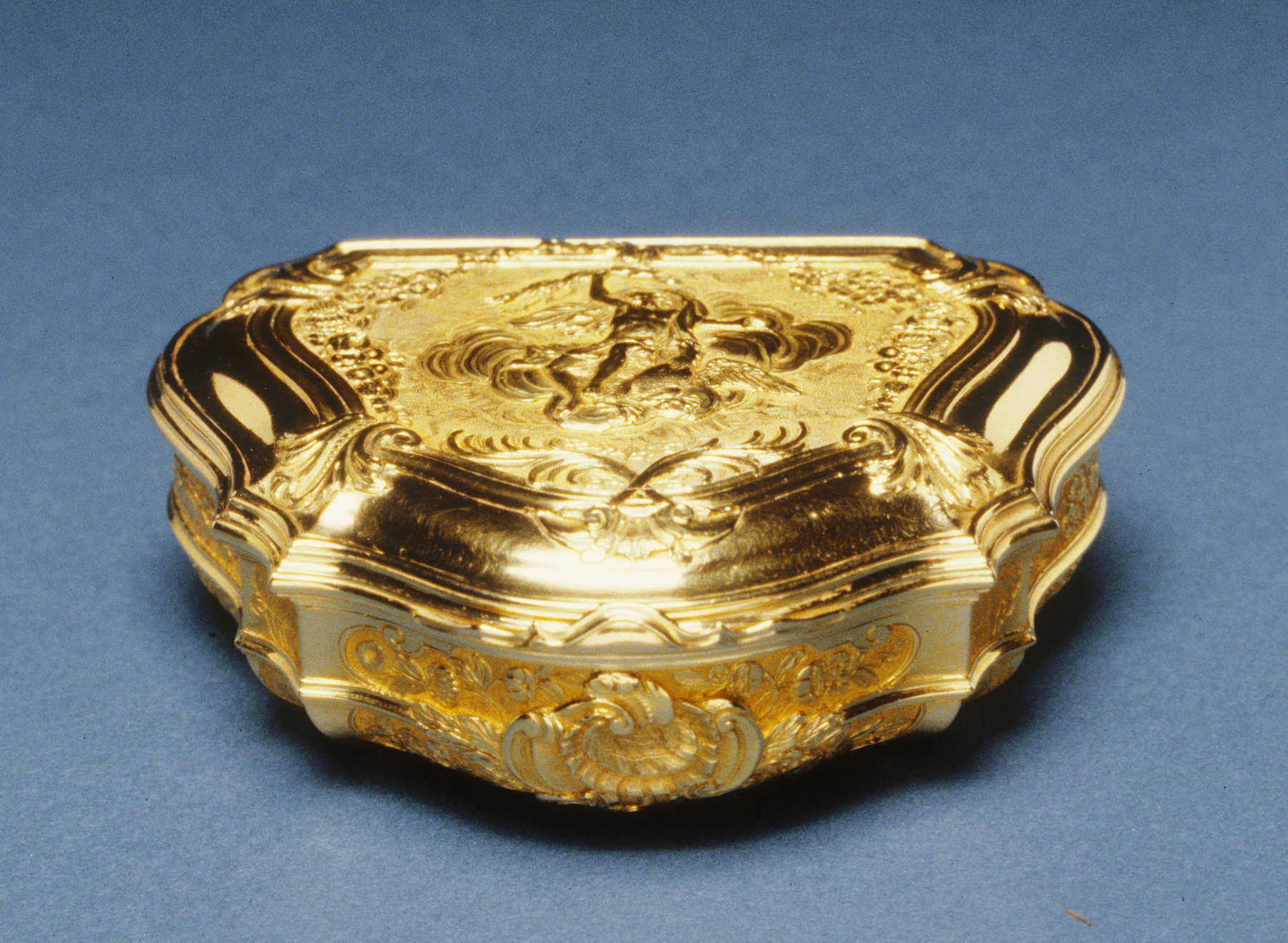 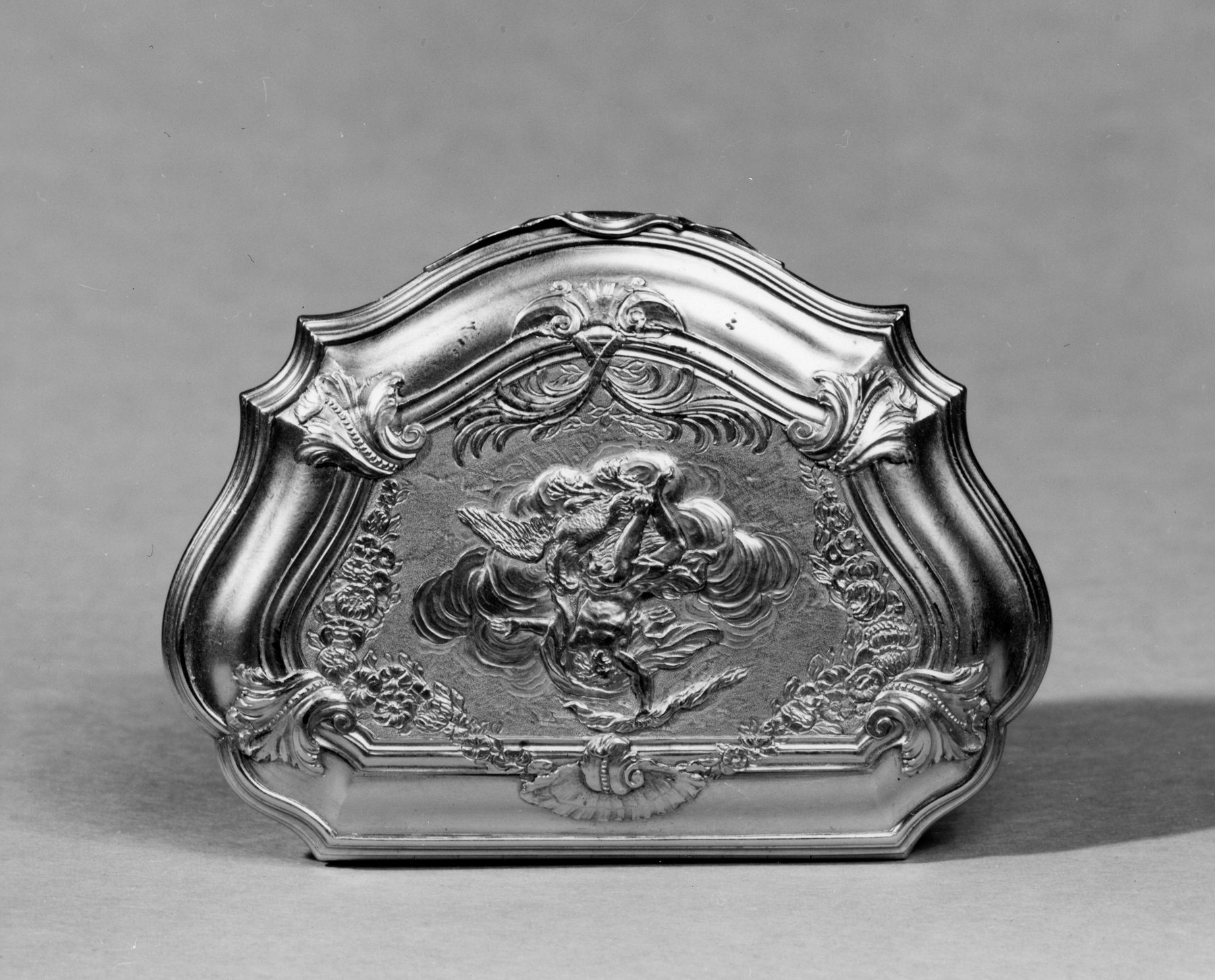 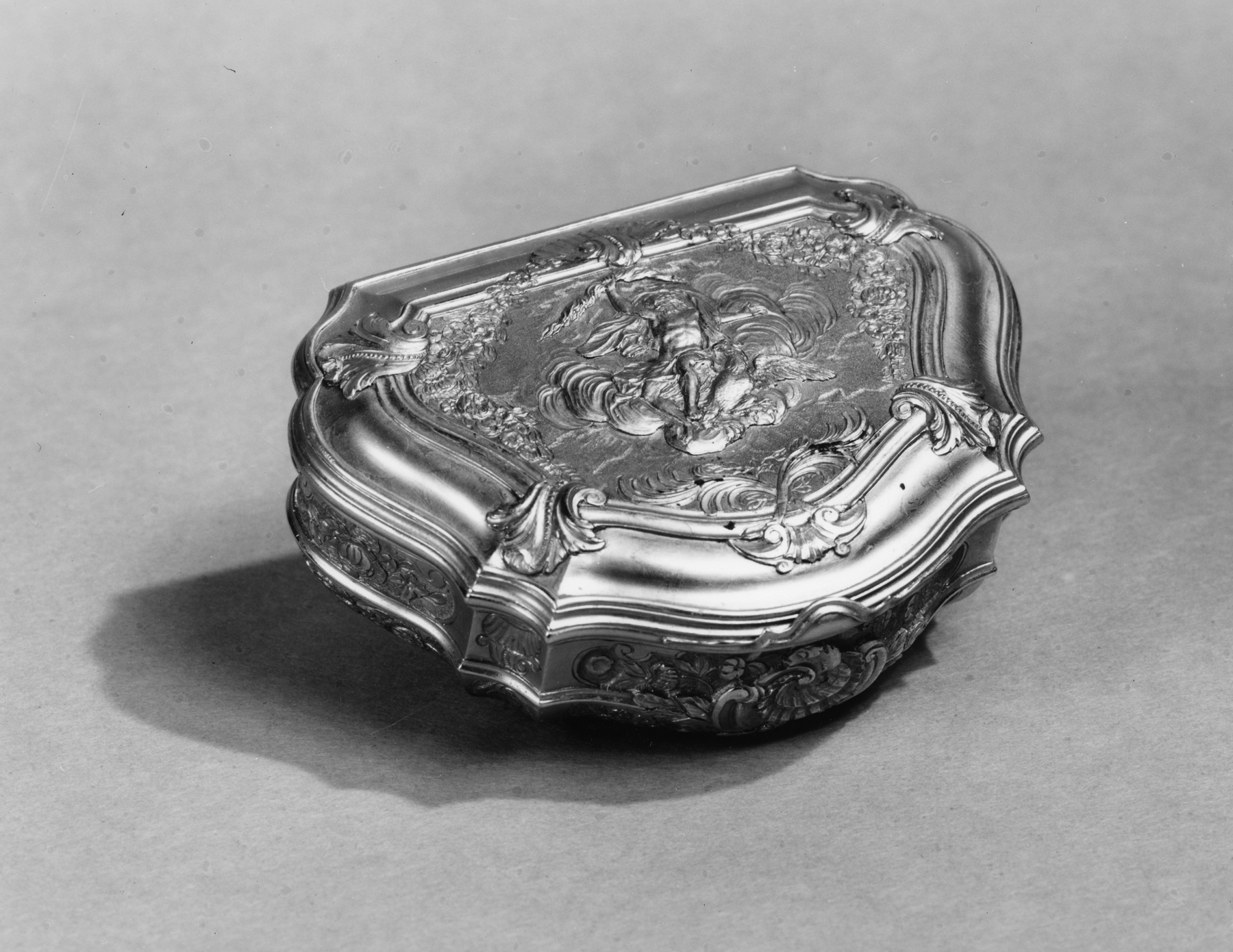 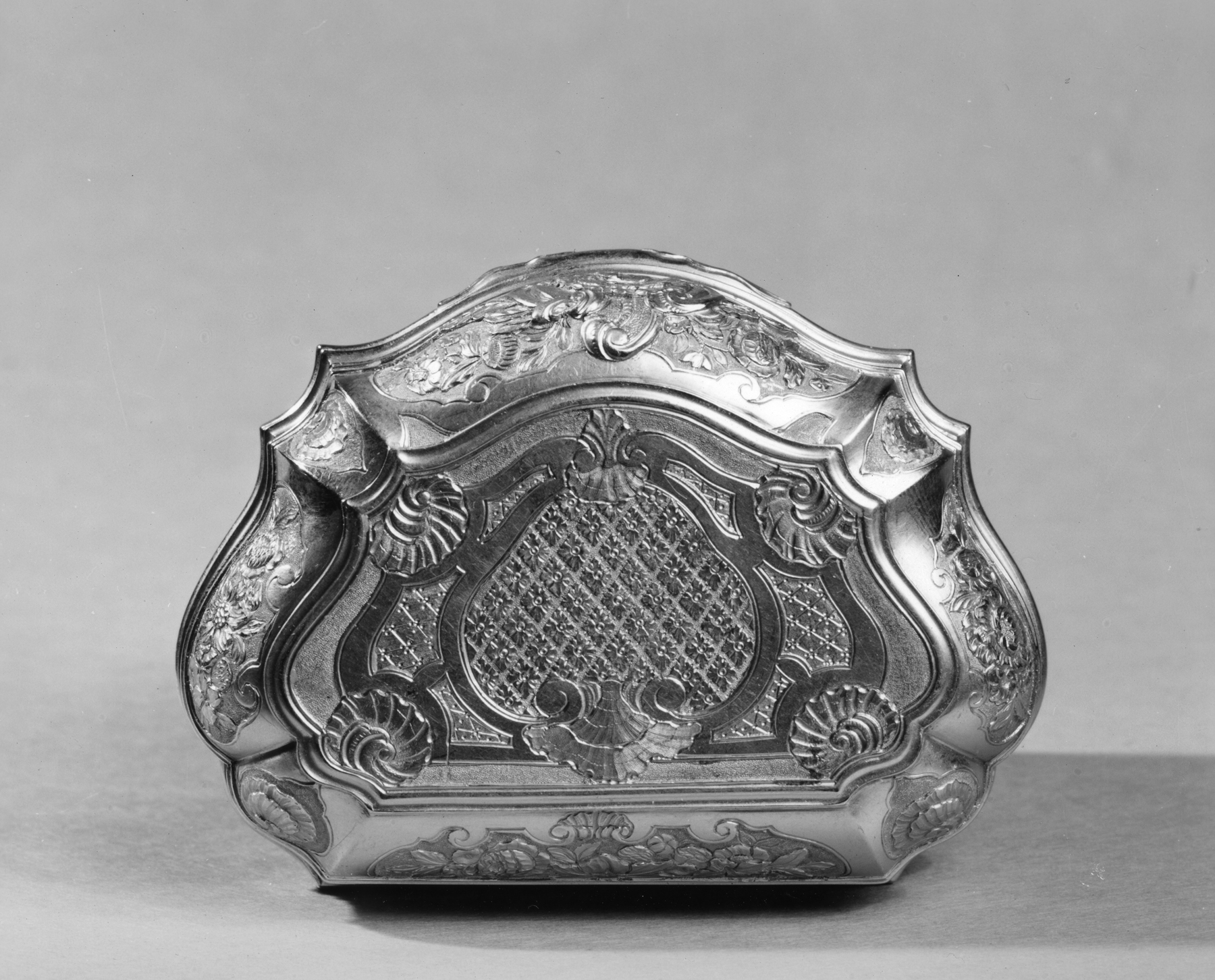 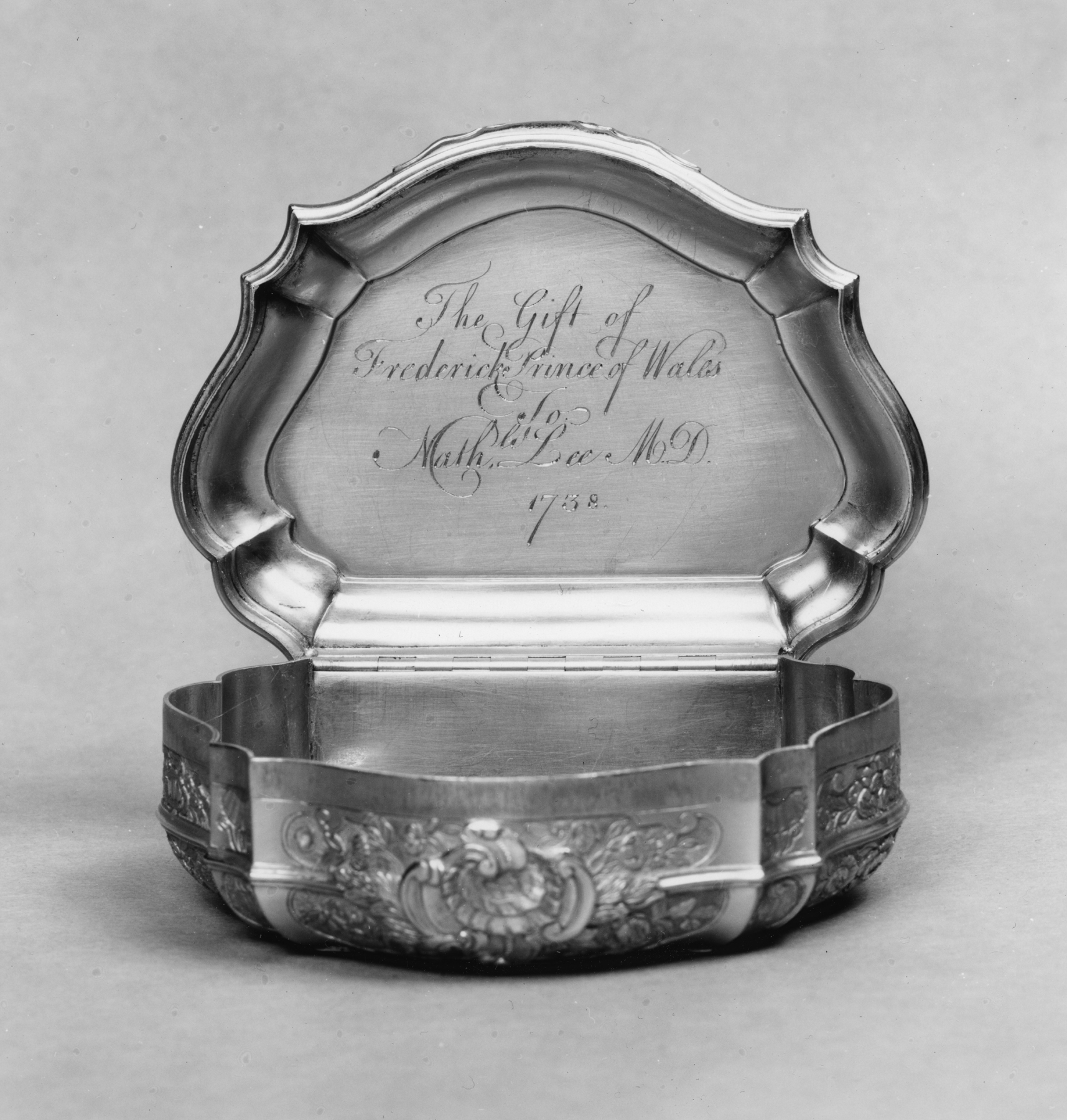 Originating in the Americas, the practice of “taking snuff,” or inhaling pulverized tobacco through the nose, became a common European custom by the 17th century. Consumers of all social levels and of both sexes would carry small, airtight boxes filled with the powdered tobacco, taking a pinch whenever they needed. Over time, however, society’s elites began to purchase and commission increasingly extravagant and precious boxes. Kings and Queens would often present snuffboxes to ambassadors as diplomatic gifts and to courtiers as payment for services. Made of a variety of precious materials, including gold, enamel, semiprecious stones, lacquer, and tortoiseshell, snuffboxes were coveted and enthusiastically collected. Displaying one’s collection of prized snuffboxes or stylishly retrieving an elegant box from one’s pocket were important social rituals; these objects revealed a person’s tastes, interests, and erudition. Frederick, Prince of Wales (1770-1751), heir apparent to the British throne, presented this chiseled gold snuffbox with a presentation inscription to Dr. Nathaniel Lee (1664-1755). On 4 June 1738, Dr. Lee attended the Prince of Wales's wife, Princess Augusta of Saxe Gotha, during the birth of of the couple's first son, who eventually reigned as King George III.

The snuffbox shows Jupiter grasping a thunderbolt and seated on his eagle amidst clouds. The border shows floral festoons and two crossed braches of laurel. Round the body is a double line of flowers or shells. On the bases is a trellis pattern. The motif of Jupiter is copied from the design of Claude Audran III (1658-1734) peintre du roi, for the center portion of a tapestry from the set of "Les portieres des Dieux, Les quatre Elements (Jupiter for Fire) which were ordered in 1699 and painted before 1702.

The inside of the cover is engraved "The Gift of / Frederick Prince of Wales / To / Nathl. Lee M.D." This is English work, probably made in London, ca. 1738. There are no marks. In his will Dr. Lee left the box to "Mrs. Sarah Beavis of Hatton Garden."