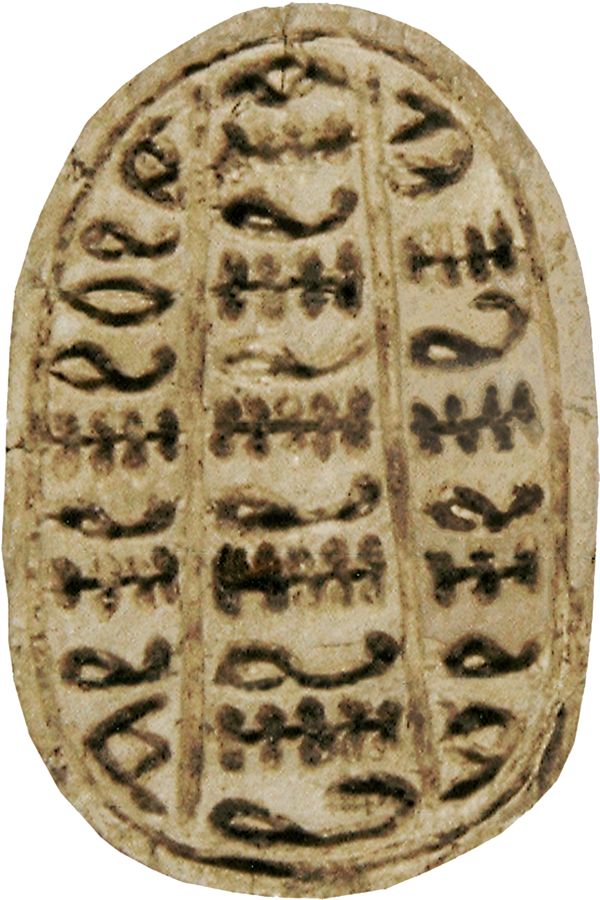 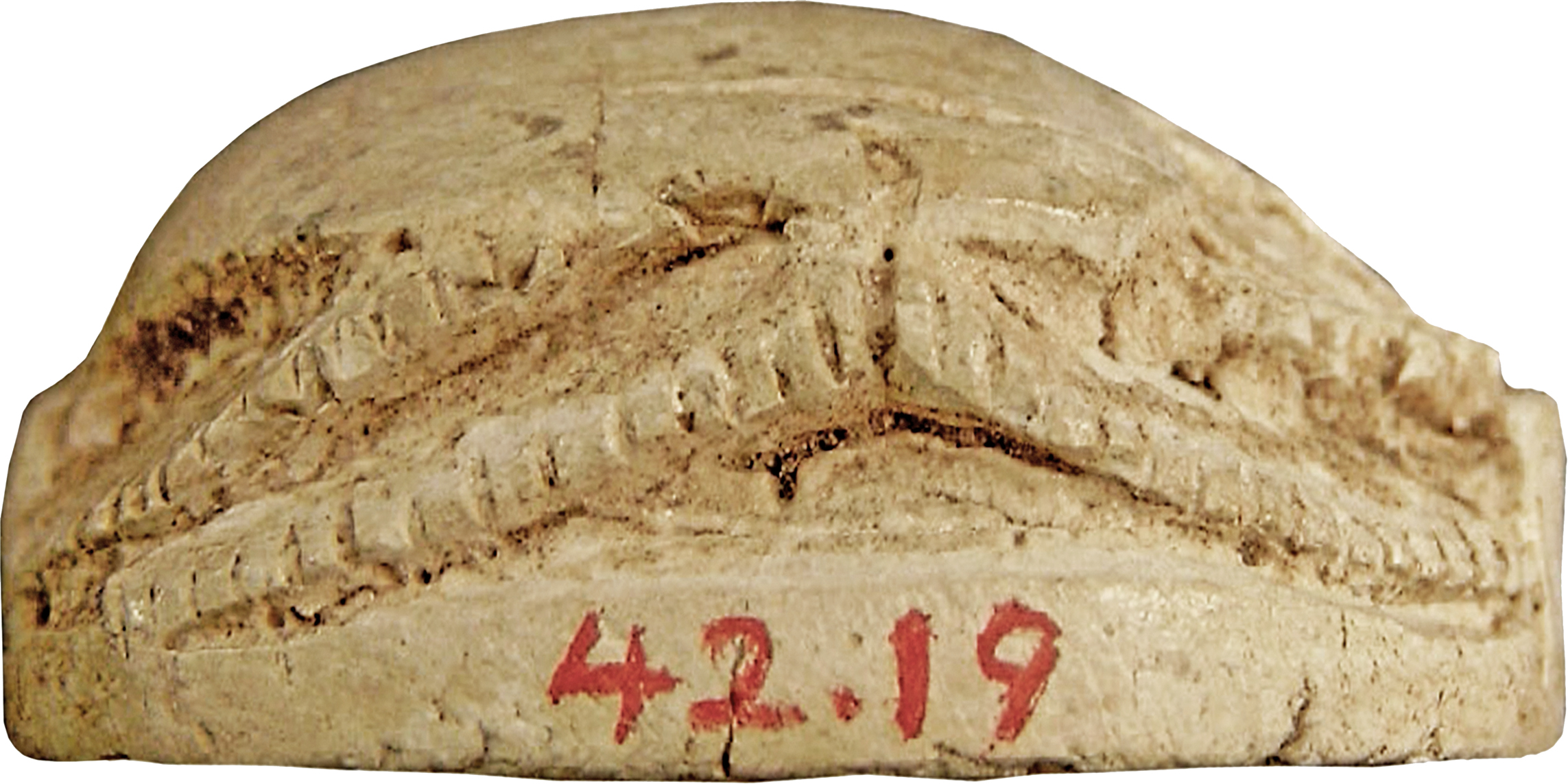 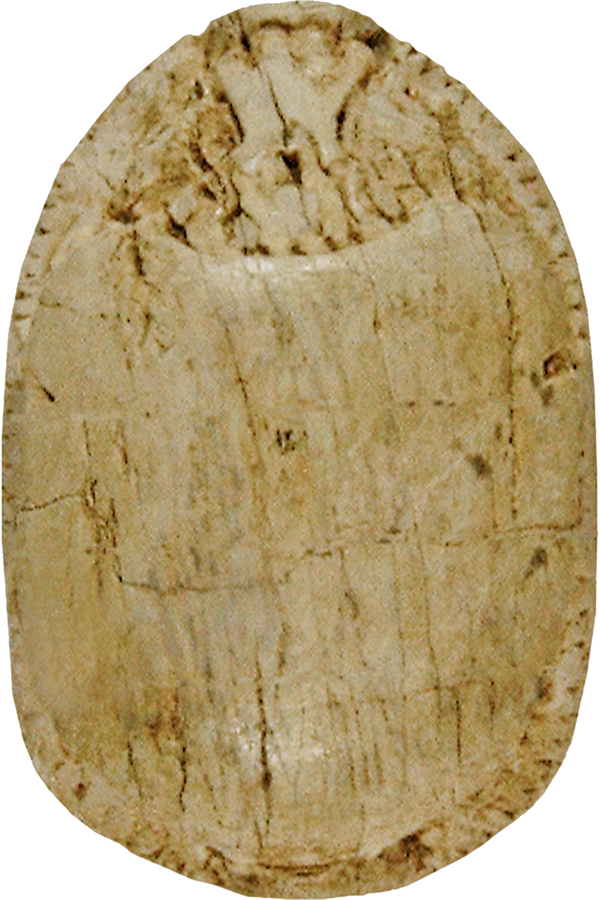 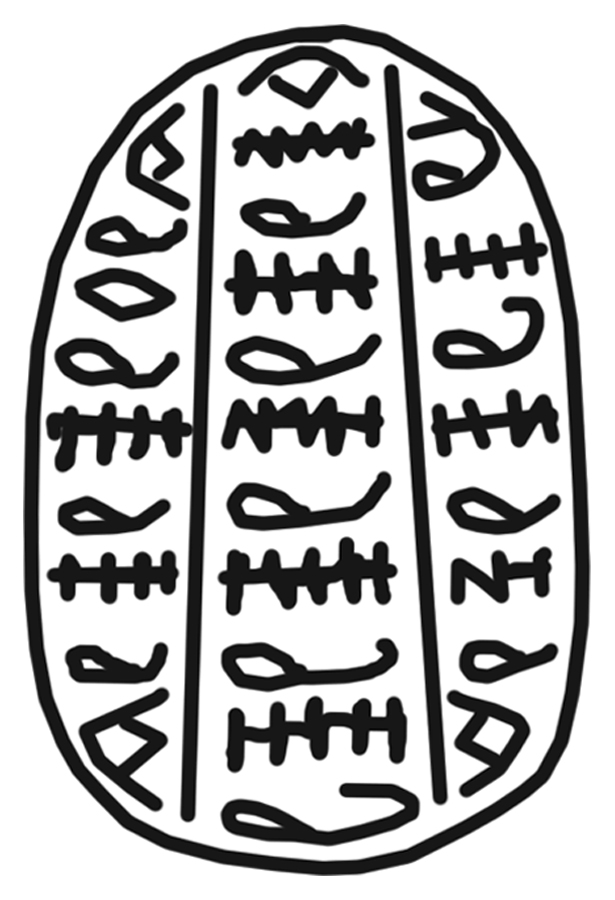 Scarab with Three Columns of Pseudo-hieroglyphs

This scarab has a special motif on the bottom, which is known as a-n-r-combination, because it consists of the sound-signs for 'ayn, n, and r. The signs are arranged in three columns, combined with lotus blossoms at the beginnings and ends; the columns are framed by an oval line. The bottom design is deeply incised, and the shape of the signs typical for the Second Intermediate Period: n with a horizontal line crossed by short vertical lines, c with a curved line, and an oval lop at the end.
The highest point of the back is the elytron (wing cases); two side-notches at shoulder height define the partition between pronotum (dorsal plate of the prothorax) and elytron. The head is trapezoidal, and the clypeus has four frontal serrations and a central base notch. The design of the back is simple, the carved side-notches short and not totally aligned. The proportions are unbalanced, and the pronotum is short in comparison to the head section and the elytron. The raised extremities have natural form and vertical hatch lines; the background between the legs is hollowed out. The base is long-oval, and the head part smaller than the rear part.

The scarab is longitudinally pierced, was originally mounted or threaded, and served as an amulet. Probably, it should grant magical and/or divine support (a-n-r-pattern) and regeneration (lotus). It is not possible to determine the exact meaning of the a-n-r-pattern, although several options, such as a relation to the name of the god Re, or to a magical formula, have been discussed. In this special case with the dominance of c and n, it would make sense to consider a magical formula, which should strengthen the recreative (scarab), and regenerative (lotus) function by repetition.

[Inscription] Three columns of pseudo-hieroglyphs in the so-called a-n-r-combination (combination of the sound signs c, n, and r).