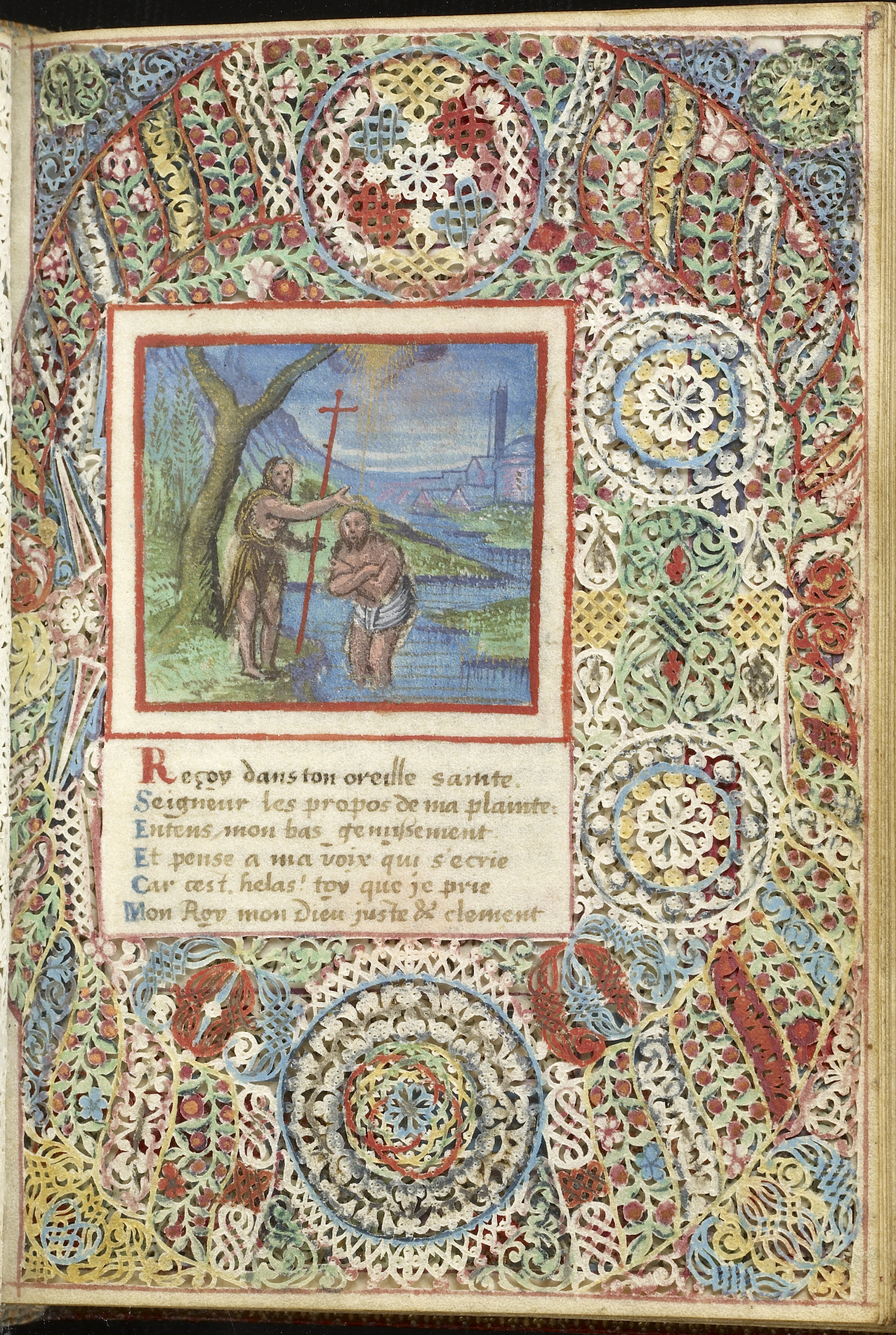 This Prayerbook was made for Marie de' Medici in the second quarter of the seventeenth century. Beyond its provenance as a personal book owned by the famous queen, it is exceptional for its intricately cut borders, which transform the parchment margins into lace. This effect was created using a technique known as "canivet," in which a small knife was used to cut ornate patterns into paper or parchment. An art form that flourished originally among nuns in France, Germany, and the Netherlands beginning in the sixteenth century, it was employed to exceptional effect in several manuscripts connected with Marie de' Medici. The Walters manuscript, made for her while she was regent of France, and wife of King Henry IV, contains twenty-eight miniatures, including original religious imagery as well as several later additions: a gouache portrait of the elderly queen, and nine small miniatures produced in Bruges ca. 1450 by an artist influenced by the Eyckian and Gold Scrolls styles prevalent at the time; the coat-of-arms of Marie de Medici, as well as her monogram. The Walters manuscript retains its original binding composed of mosaic inlays in green and black leather, as well as fine gilt pointillé foliate tooling, and a replica of the binding was created by Léon Gruel for Henry Walters on one of his seventeenth-century printed books (92.467) that also connects to Marie de' Medici.

[1] Inscribed "o Ep" on front flyleaf i, r; "40D168. 1776" on back flyleaf i, r
[2] Front flyleaf iii, r inscribed "No. 358. B. d'Heiss"
[3] Inscribed "Duchesse de Berry No. 15" on front flyleaf i, r
[4] "3" inscribed on front flyleaf i, r
[5] Gruel's ownership of the manuscript is assumed given his careful replication of the binding on a printed book for Henry Walters ca. 1920, however there is no evidence in the manuscript to connect it with Gruel (he usually applied his bookplate inside), and as Walters owned the lace book by 1905, it is possible he obtained it elsewhere and only asked Gruel to replicate the binding; French book dealer Damascene Morgand published the lace book in 1886 while it was still in Machy's collection, and it is possible it could have gone through his hands later, as Walters purchased many books from him as well

Acquired by Henry Walters, before 1905