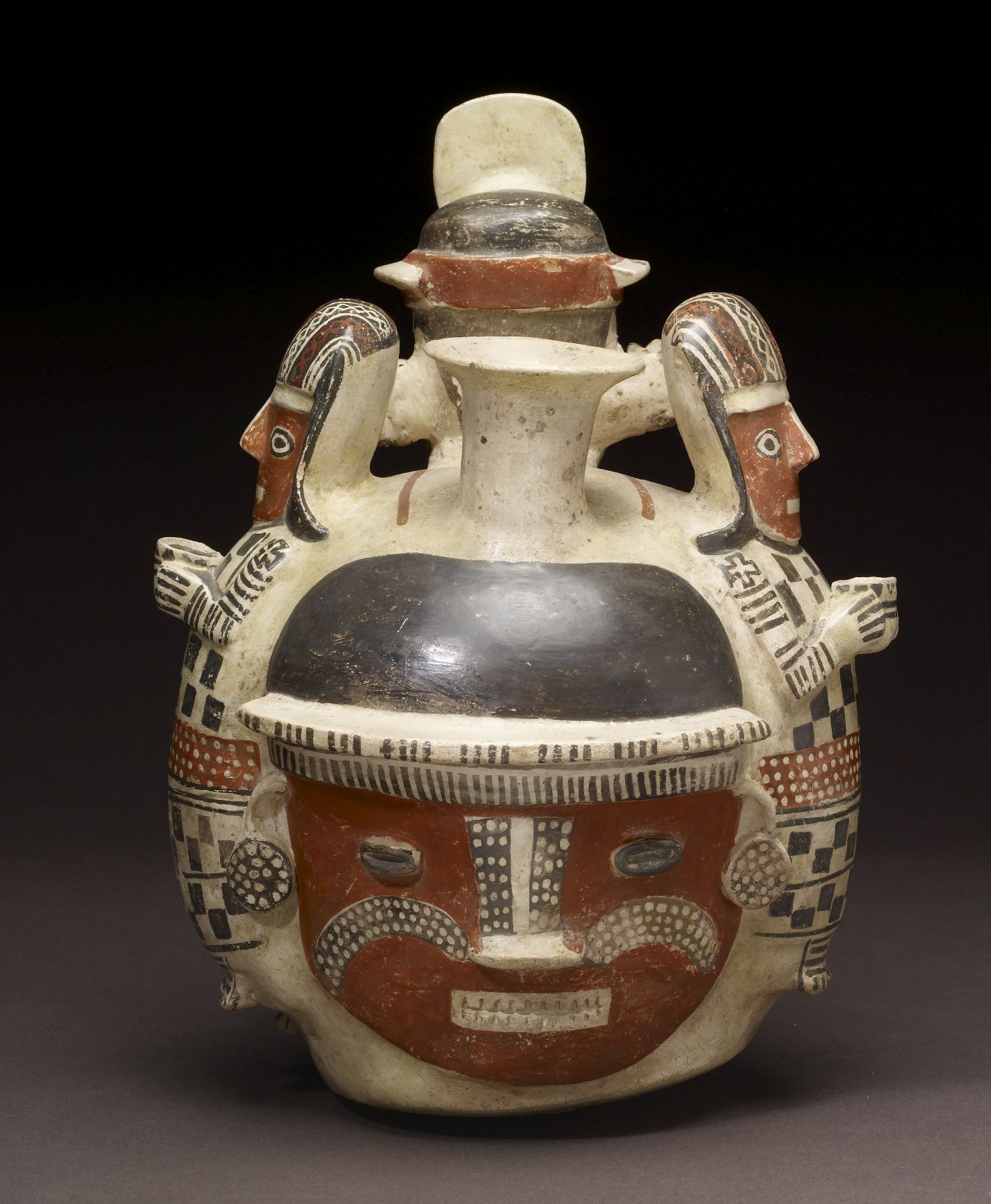 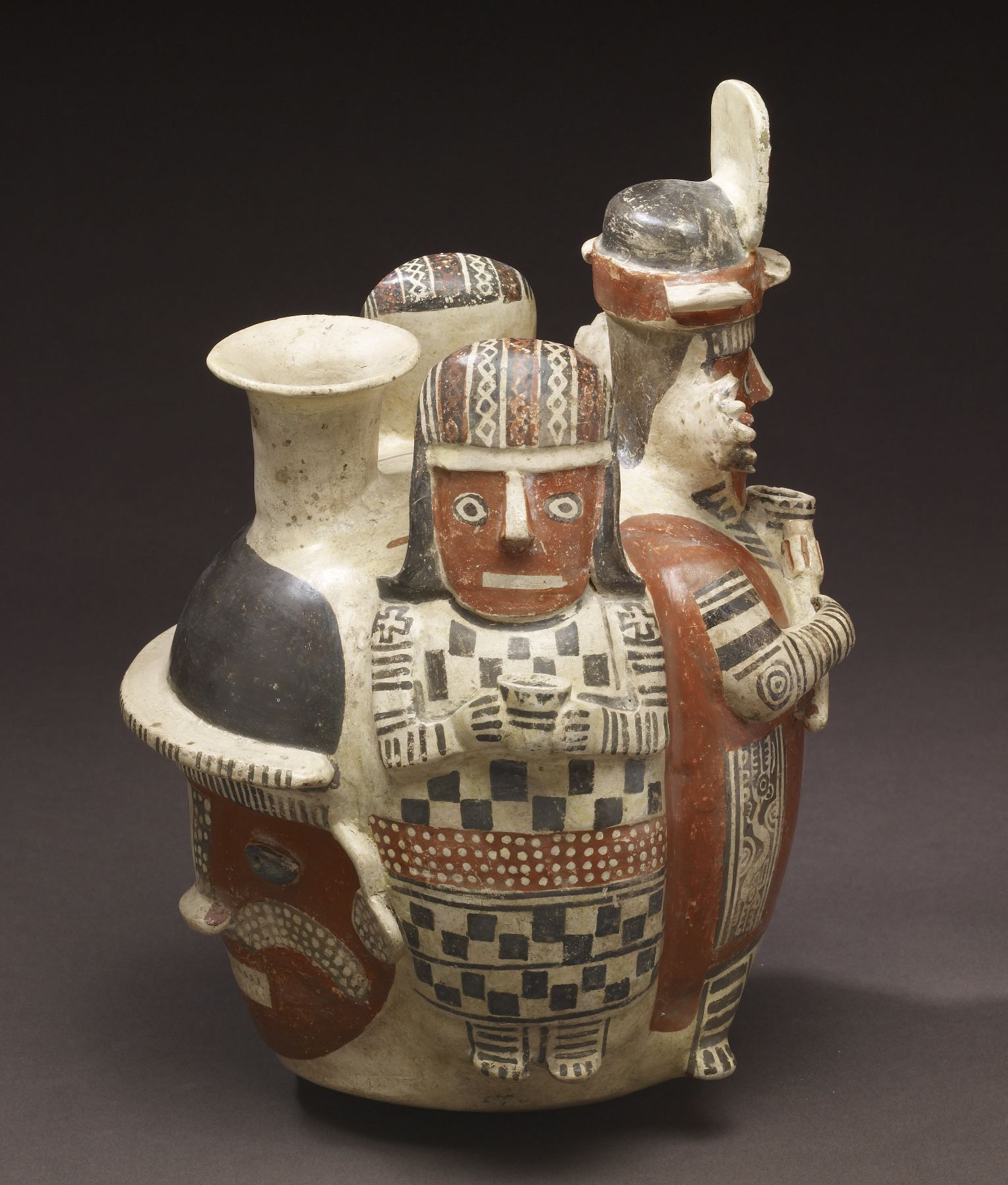 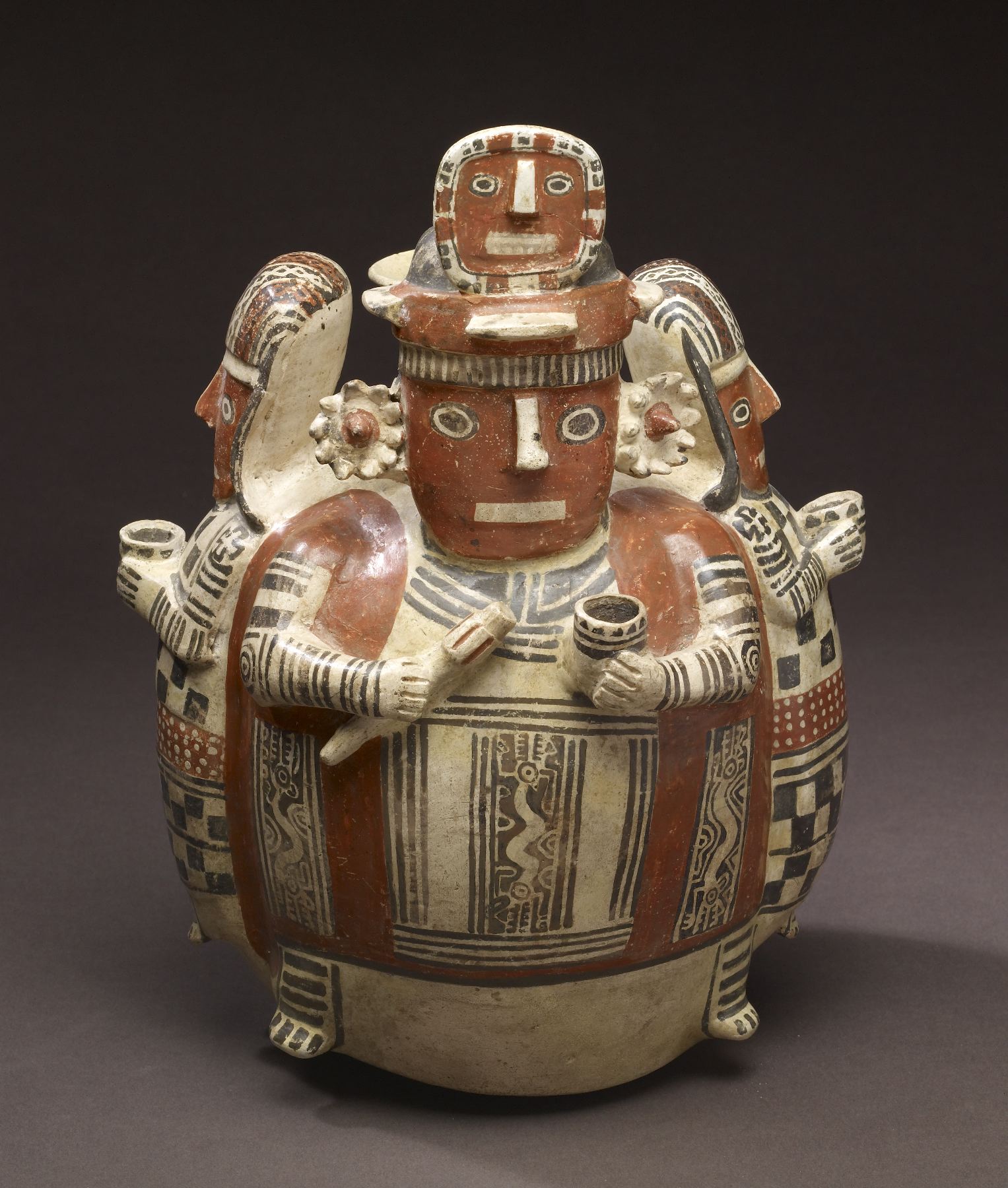 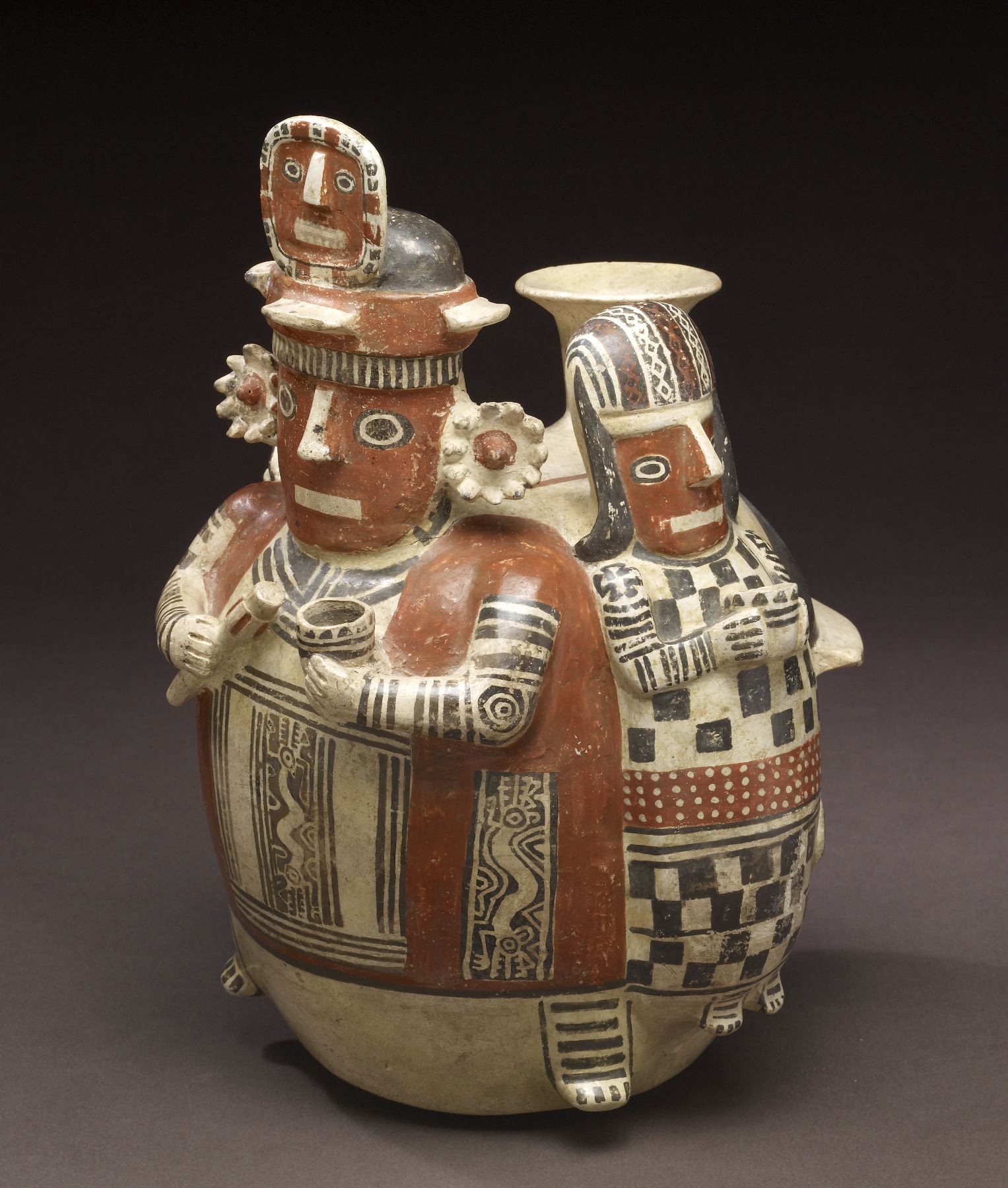 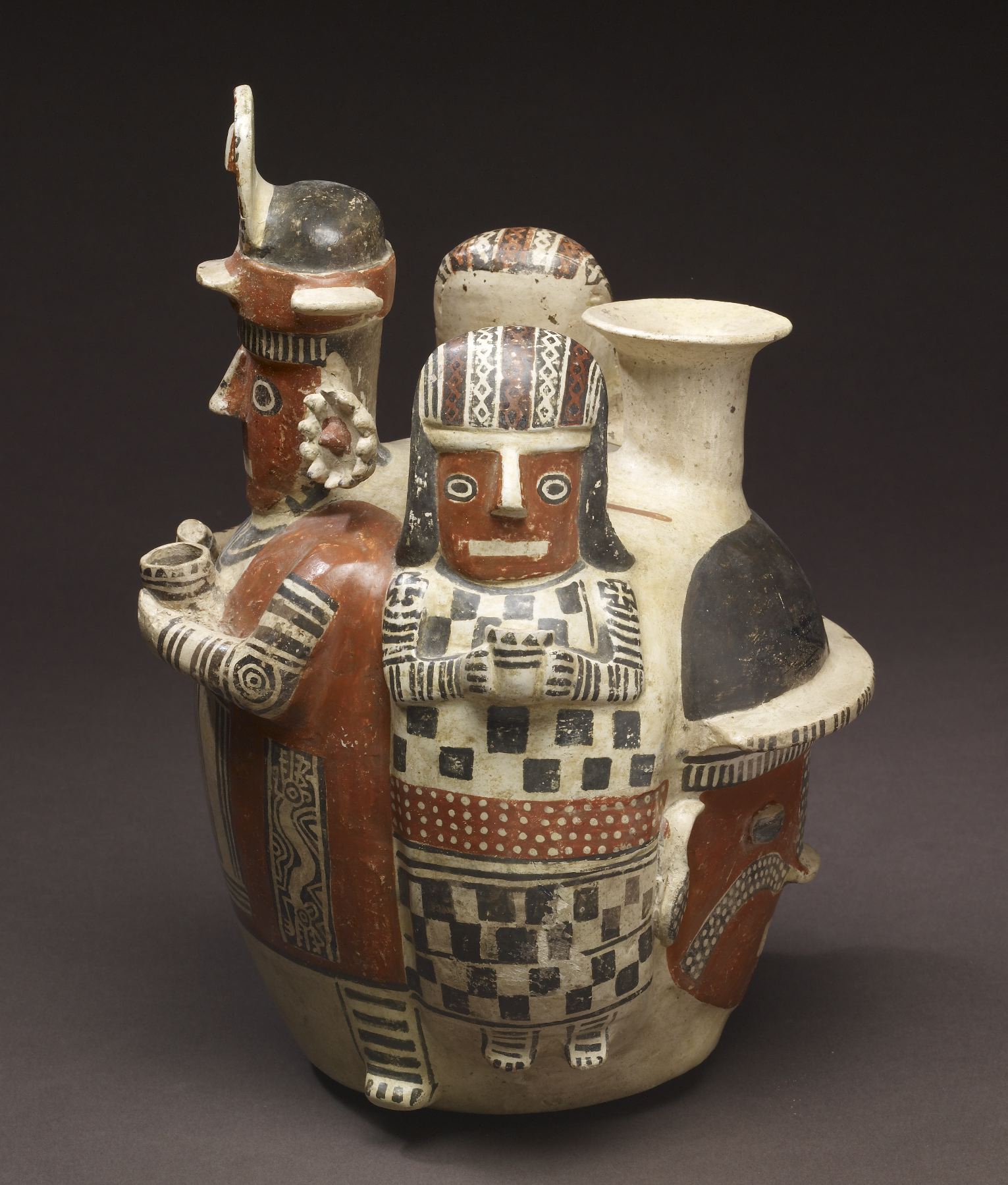 Northern Peru's pottery traditions focus on three-dimensionality, the vessels often modeled into a variety of volumetric forms depicting human figures, fruits, or vegetables and even architecture. The coastal Moche and their highland Recuay neighbors were masters of the modeled form, having explored and perfected this tradition whose origins reach back as much as a thousand years among cultures of the Early Horizon (900 -200 BCE). Recuay pottery is typically thin-walled and made from a kaolin-based clay. Vessels are decorated with negative-resist and positive slip painting as well as an unusual post-fire, resist black organic pigment. The varied resist-painting techniques allowed Recuay artists to create complex design fields on the positive, slip-painted backgrounds. Recuay art, and especially its narrative pottery, features the Andean concepts of dualism and reciprocity as key universal facets. Emphasis was placed on dyads such as male-female, which is aptly expressed by this extraordinary figural bottle. A finely dressed noble woman stands at opposing sides of the four-sided vessel, while a male personage flanks the other two faces. The males pertain to a second dyad of warrior and captive, the latter represented as a trophy head rather than a full figure. The women and warrior cradle ceremonial cups, perhaps "keros" (see WAM 2009.20.91) in their hands; the male figure also clutches a war club in his right hand. His fine clothing and headdress identify him as a member of the ruling class. The iconic face in his headdress recalls depictions of ancestors and cult figures as prime shamanic beings that often adorn the heads of authority figures from earliest times throughout Peru. Considered together, this four-sided figural vessel embodies the Andean ideology of war and sacrifice to ensure the earth's fertility and maintain universal balance. The taking of captives for ritual sacrifice was facilitated by the victor's shamanic power, here implied by the male figure's headdress. As elsewhere in ancient Peru, this ceremonial pageant was a sacred necessity and the responsibility of the nobility. It is reflected in stone sculptures from the Recuay area (the highland Callejón de Huaylas region), which feature small trophy heads and larger male figures carrying clubs, shields, or decapitated heads. The Recuay tradition of public stone sculptures portraying women echoes their depictions on pottery vessels, signaling the importance of female participants in both ritual and political events.