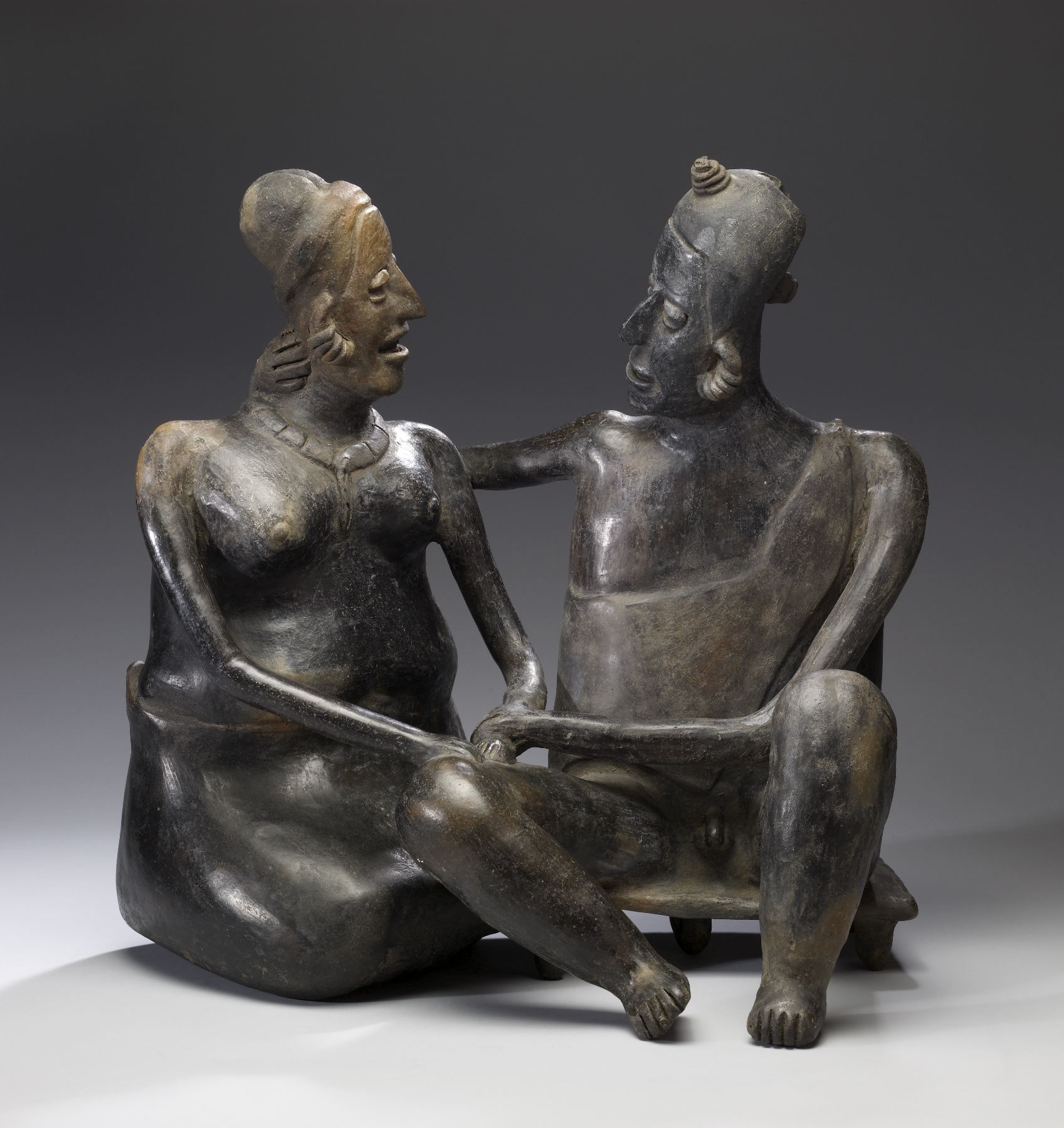 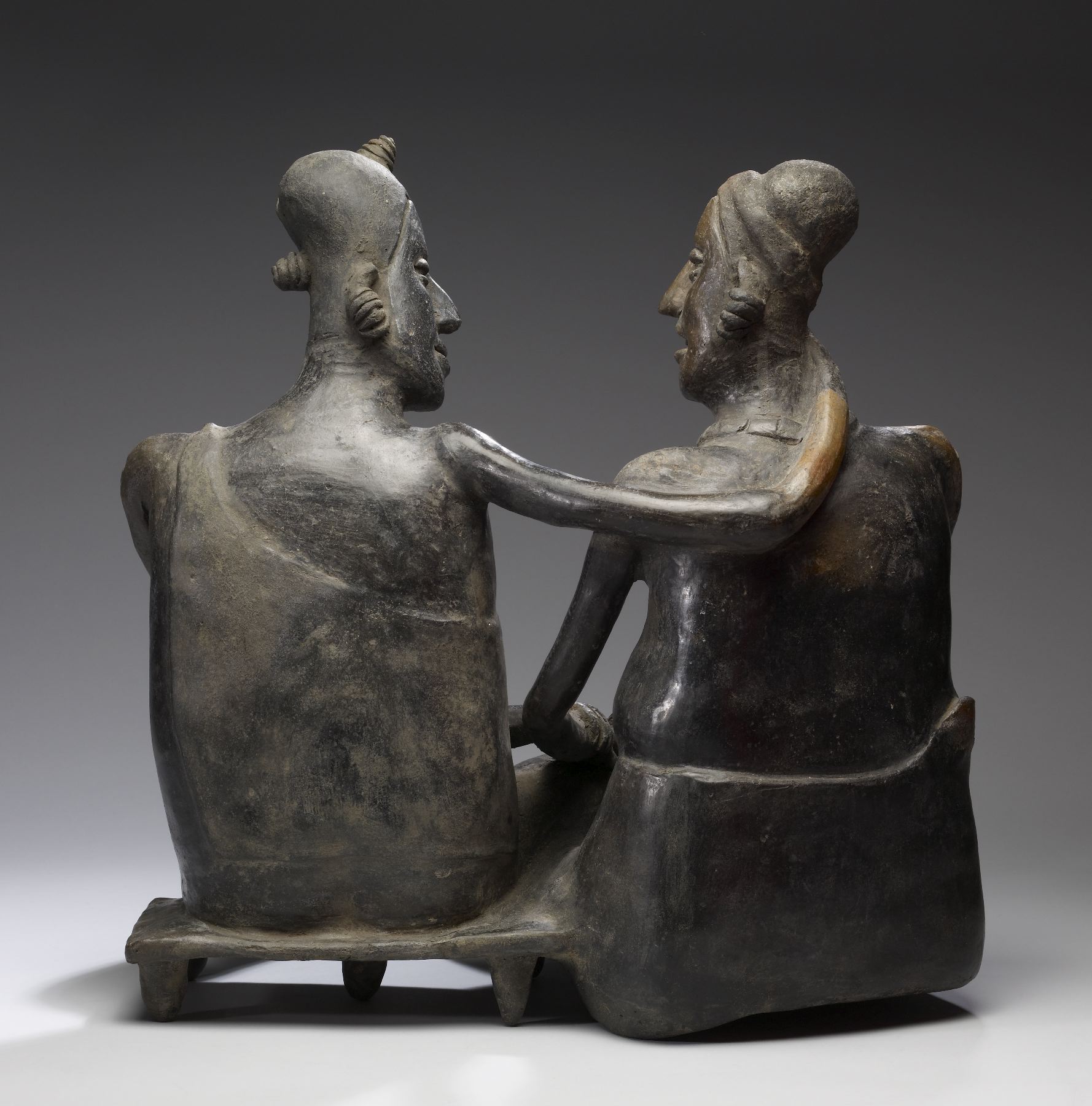 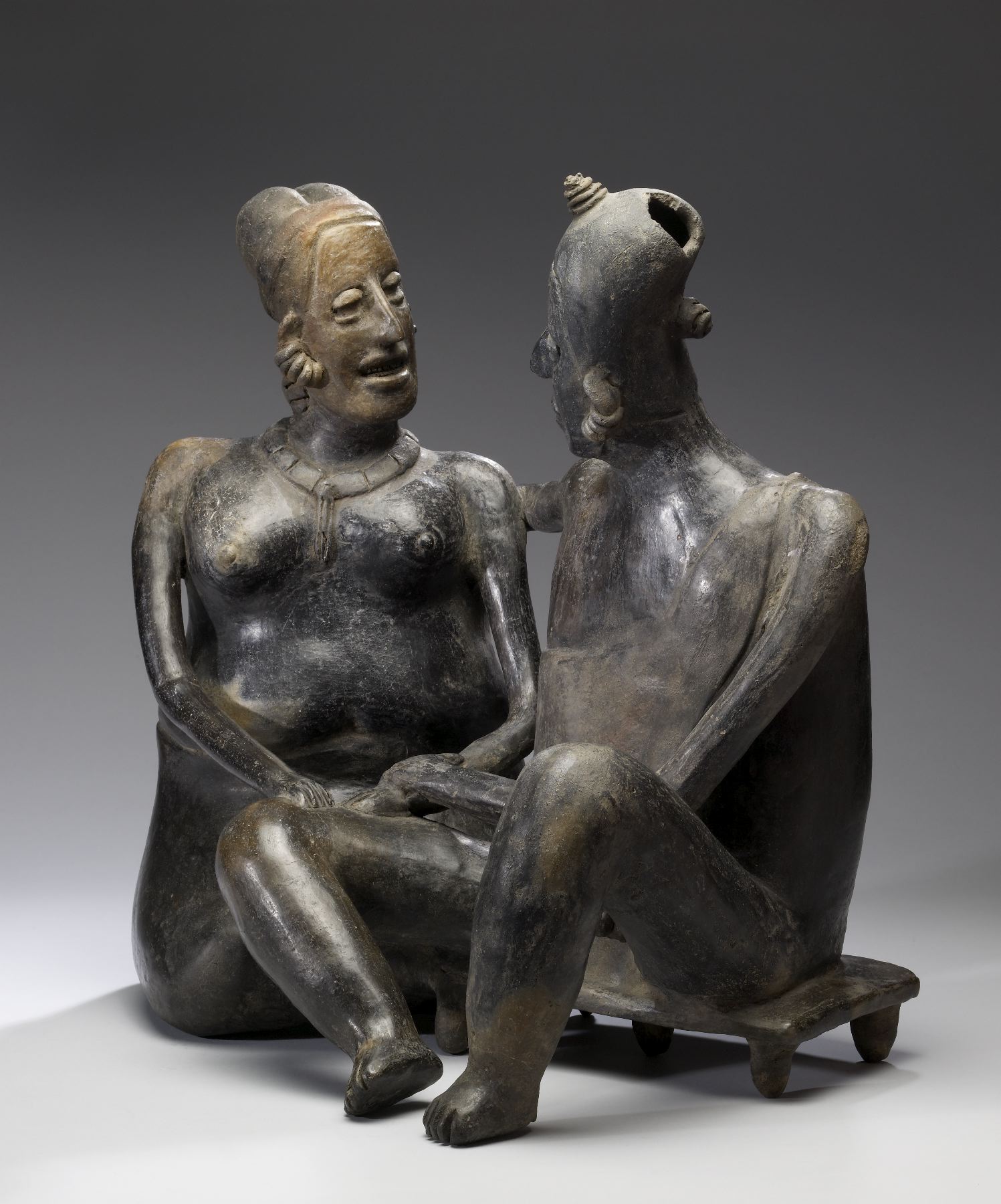 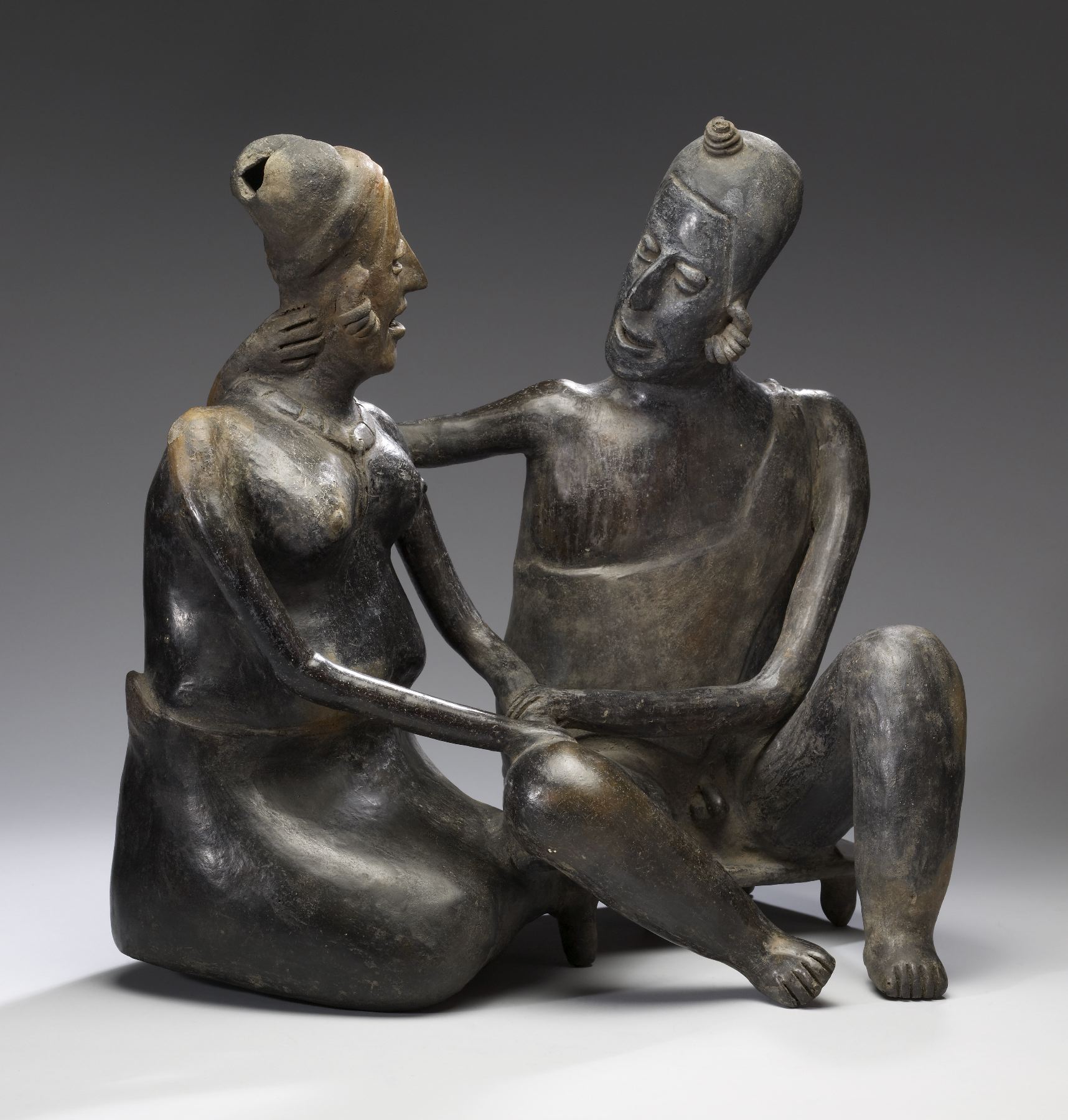 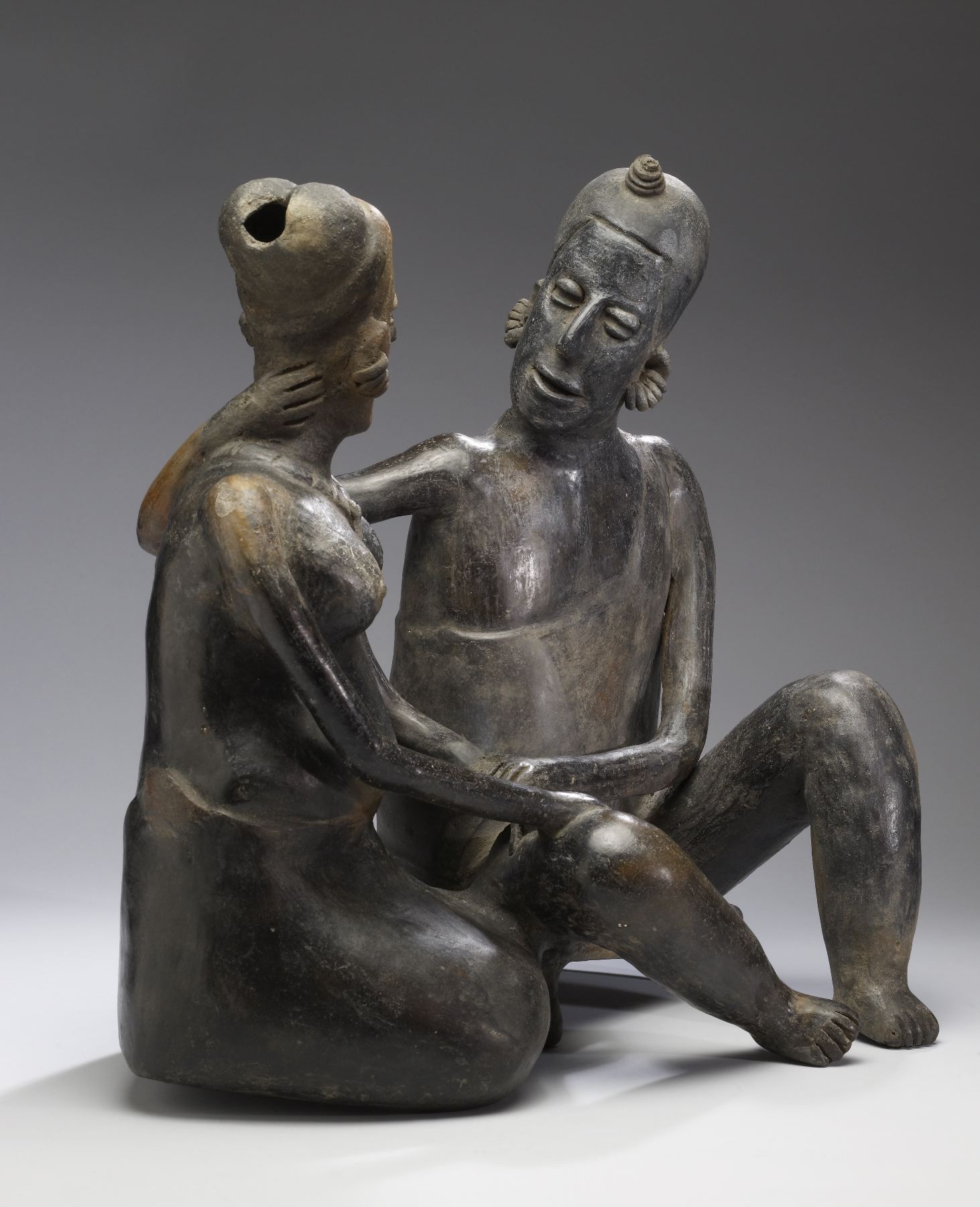 Conjoined figures constitute an infrequent but not unknown narrative type of West Mexican tomb sculptures. Those from Colima include a family group (man, woman, child), a mother and child, or combat scenes. Combat is mirrored in a warrior-and-captive piece from Jalisco, and male-female pairs are found not only in Jalisco but especially in Nayarit contexts. Other conjoined figures depict a cheekpiercing rite in which two or more men and women participate. Some double figures have been interpreted as portrayals of a marriage or otherwise affianced couple given that the man and woman touch or embrace and visually engage each other with what could be interpreted as a tender gaze of affection, as is seen in this sculpture. However, the rendering of personal affection is rare in Mesoamerican art, and the few Classic Maya examples from Jaina Island are interpreted as symbolic renderings rather than depictions of interpersonal intimacy. And although the often published "marriage couple" pairs of similar-looking male and female figures from West Mexico may imply a local tradition for ceramic portrayals of devoted couples, these pairings have no basis in archaeological reality. Instead, they most likely constitute a fabricated grouping invented by tomb robbers and art dealers. A closer examination of this paired figure artwork suggests an alternative interpretation as a healing ceremony by a shaman-curer and his patient. In myriad similar examples, one of the figures wears a curious panachelike or hornlike element atop his/her head, as seen here, which may identify the person as a shaman. Other conjoined figures feature one member grasping a rattle, rasp, or drum. These instruments are intimately associated with shamanic practice, and they are frequently integral to healing rituals among present-day shaman-curers in Mexico. In other instances, one of the figures holds a small bowl, implying the ingestion of a curing potion. The weight of the available evidence suggests that this exceptionally expressive and sensitive sculpture portrays a curing ceremony rather than an amorous couple. The piece was extensively examined using x-radiography and thermoluminescence (TL), the latter for dating the last firing of the object. The research establishes that the piece has suffered major damage, with all appendages having been repaired. The x-radiography revealed that the sculpture is composed of two figures, but whether they were originally conjoined is difficult to determine because all points where the bodies touch have been repaired. These repairs probably were done at a different time than the manufacture of the piece; the composition of their clay is different from that of the majority of the piece. The joins of the necks strongly suggest the heads are in their original, intended position, which supports their being an authentic conjoined pair. The four TL date samples were taken from only one of the two clay bodies, this choice being by chance rather than intention as the joins were not visible on the object's surface when the samples were taken. All four TL samples indicate a production date of 100 -250 CE.