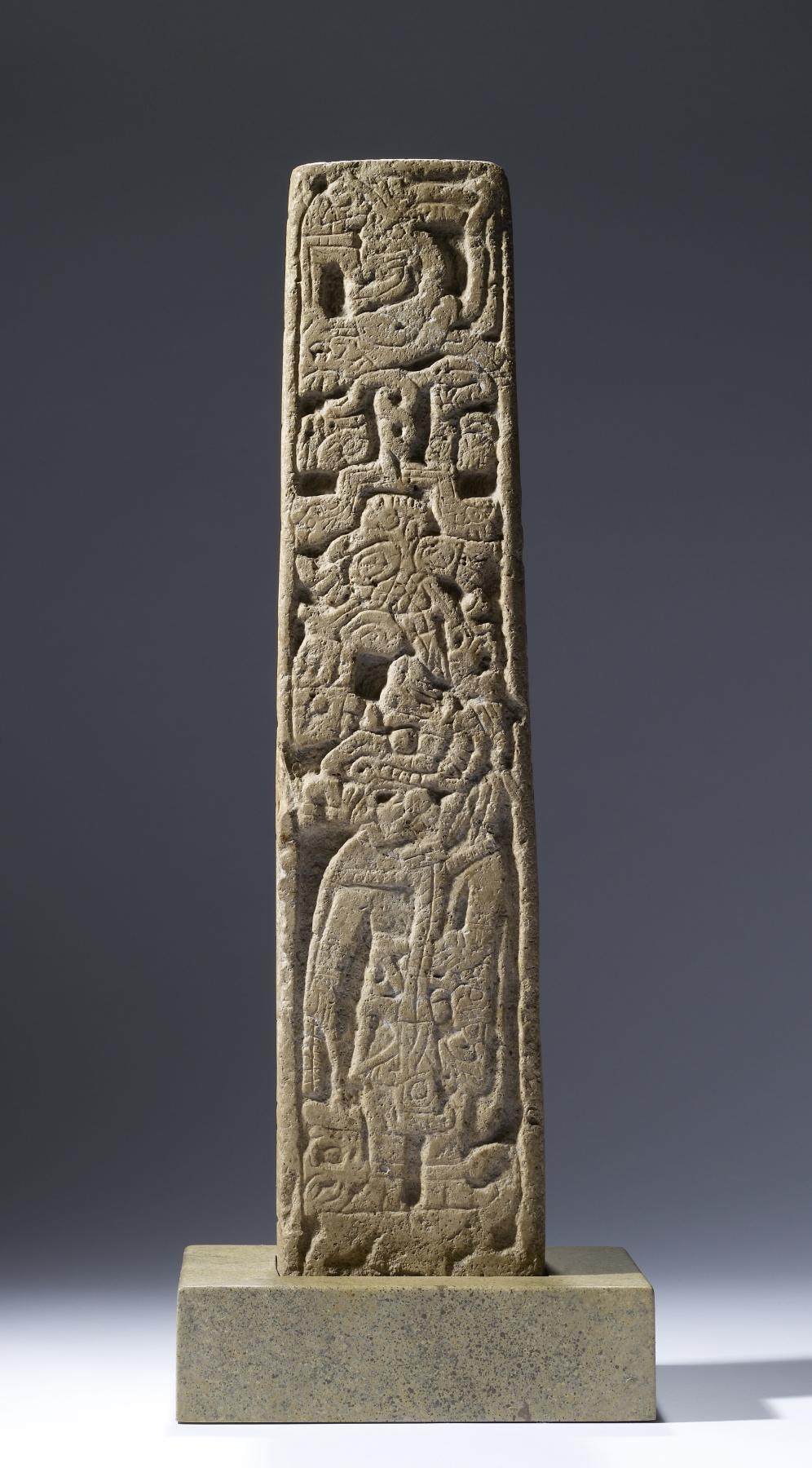 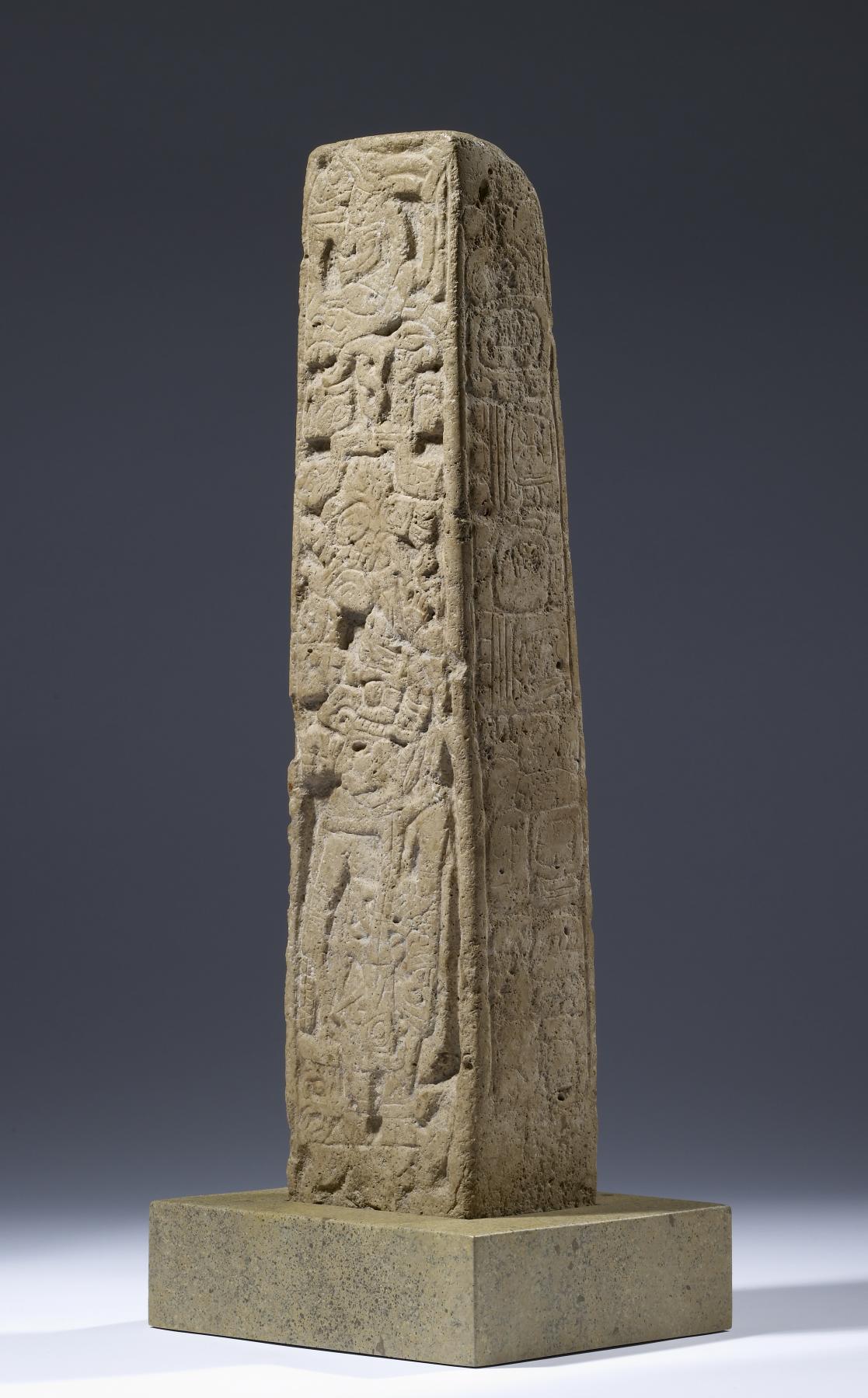 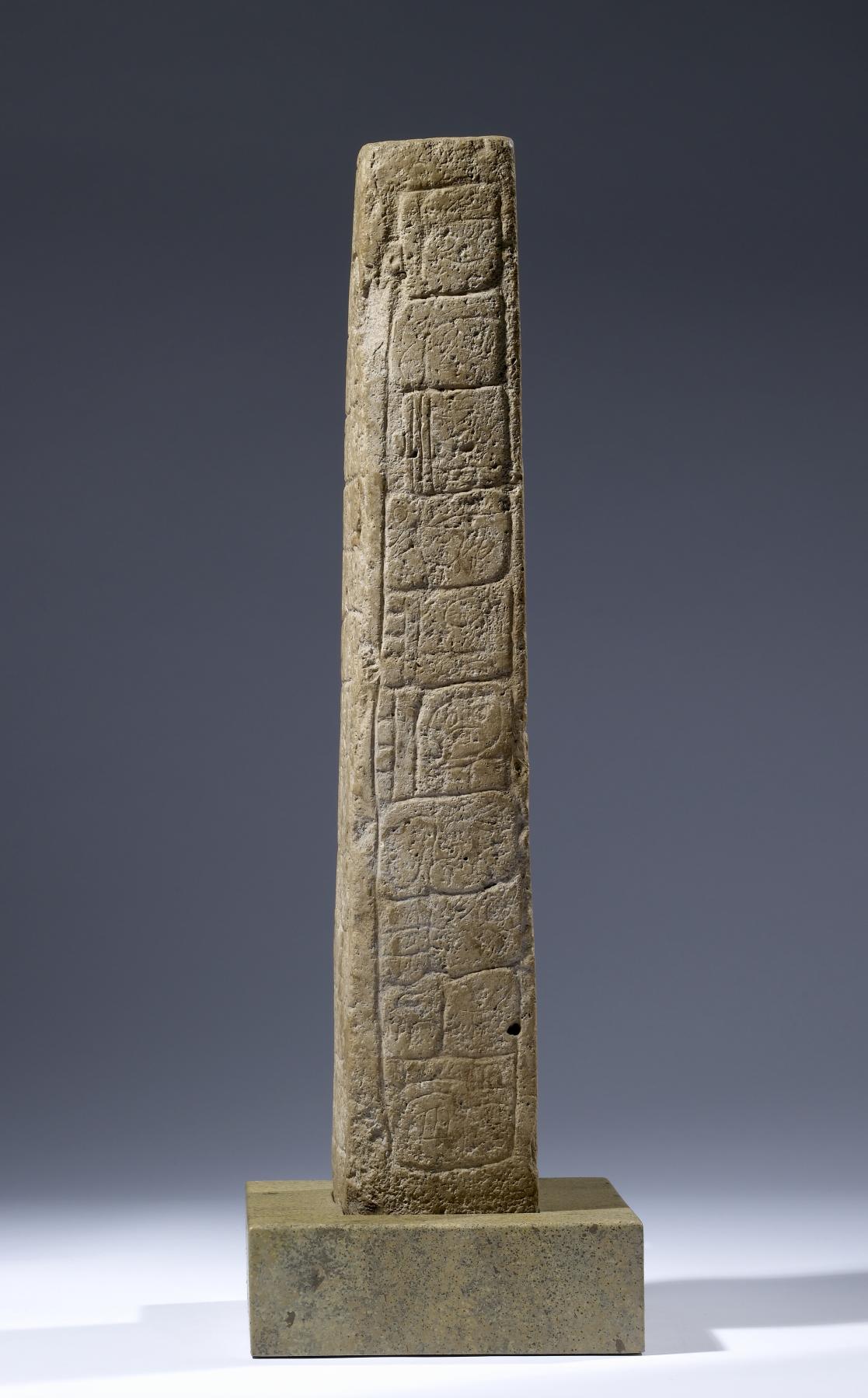 This miniature stela reportedly came from Uaymil, a site of modest size on a small island off the north coast of Campeche. In spite of its relatively small size, Uaymil played an important role as a transshipment zone during the Late Classic and Early Postclassic periods (650-1300 CE), facilitating the movement of goods throughout southern Mesoamerica. Miniature stelae are rare and are found exclusively in Campeche and Yucatan. They likely were placed on altars or benches inside administrative or ancestral shrine buildings. All four sides of this tiny monument are carved. The front features an elaborately attired lord, likely a ruler, presiding over a period-ending ceremony. He sports a long cape and casts incense from the bag clutched in his left hand onto a small altar at his feet. His zoomorphic headdress is topped by a bird with outstretched wings, the headdress's two hieroglyphs likely having recorded the nobleman's name (now eroded). A deified ancestor floats above his descendant, providing supernatural power and legitimacy to the ruler's acts. The other three sides of the monument carry a detailed hieroglyphic text beginning on the left side. The text eludes full decipherment because of surface erosion and the occasional unusual hieroglyph or phrase. The text opens on the left side with an overly large ISIG (Initial Series Introductory Glyph). As is typical of Yucatecan monuments, the ISIG is followed by the Short Count notation (a1-a3), omitting the Long Count that is seen on most Classic Maya monuments. The Short Count date is 13 Ajaw 3 Ihk'sihoom (13 Ahau 3 Ch'en in the conventional Yucatec terminology), and it is followed by a 19 tun designation (at a4). The only calendrical placement that accords with all of these calendrical notations is 9.18.19.0.0 13 Ahau 3 Ch'en, or July 3, 809 CE. Unfortunately, the rest of the passage is eroded, although readable at A5-A6 is sakjal baak uk'in "blanching bone, its day" (free translation:, "blanching bone is the day of . . . after . . ."). This rare phrase may signify some kind of quality or attribute of the date. The text continues on the back with the new Long Count date 9.19.0.0.0 9 Ahau [18 Mol], or June 28, 810 CE, which falls precisely 360 days (1 tun) after the date on the stela's left side. The rear text, too, is highly eroded and little syntax can be reconstructed. However, visible at b9-c9 is a restatement of the date 9 Ahau, which is qualified as a k'altuun or "stone-binding," a ritual event involving the wrapping of the stela in cloth. It is likely that the lord's name follows at b10 -c10, after which the text is completely illegible. Most of the right side text remains opaque, although the paired 16-?[K'IN] 9-?[K'IN] formula (at d3 and d5) recalls the names or titles of period-ending deities in the inscriptions at Palenque and elsewhere. The 9 Ahau phrase is repeated at d6, followed by what may be a dedicatory phrase for the monument (d9-?). If correct, this phrase would imply a carving date of 810 CE, which would suggest its having been made to commemorate the 9.19.0.0.0 period ending June 28, 810 CE (muz).