This folio from Walters manuscript W.552 is executed in Kufic script. Already in the 9th century, the rectilinear Kufic script seen on this page began to be replaced by a more cursive "font" called the New Abbasid style. The Abbasids were an early Islamic dynasty that ruled from AD 750-1258. The first center of political, economic and cultural life for the Abbasids was Baghdad, the circular City of Peace (madinat al-salam), which became the empire's capital in 762. 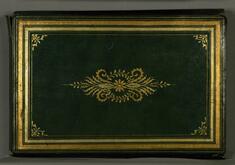