Most of the Japanese military objects William and Henry Walters collected were made during the Edo (1615-1867) and Meiji (1868-1912) periods. During these years, Japan was largely at peace. There was still a military class (the samurai), but they rarely engaged in active battle. Arms and armor became an outward symbol of status among the military class. Once Westerners were able to freely enter Japan after 1854, swords and sword fittings became popular items to collect. Some of the fittings in the Walters collection were made specifically for sale to Westerners and were never mounted on swords.

One of the most popular sword fittings among collectors was the “tsuba” or sword guard. Tsubas are placed at the end of the sword handle, or “tsuka,” to protect the bearer’s hand from being cut. Adjacent to the tsuba is a small decorated ring called the “fuchi.” This surrounds the opening on the handle and is usually paired with a “kashira” that covers the pommel end of the handle. On either side of the handle were “menuki.” These were originally developed because they helped the bearer maintain his grip on the handle, but later became strictly decorative adornments. The scabbard covering the blade is called the “saya.” In addition to shielding the sword, it often has openings along the outside to hold a utility knife and a hairpin, chopsticks or a tool designed to spur a horse. The decorated handle of the utility knife is called the “kozuka.” The other items are called “kogai,” warikogai” and “umabari.” In some cases all of these fittings were made as a set by one artist, but more frequently three or four different artists would make the pieces used in one mounting.

The study and photography of the Japanese Arms and Armor collection was made possible through a generous grant provided by the Institute for Museum and Library Services. The IMLS is the primary source of federal support for the nation's 123,000 libraries and 17,500 museums. The Institute's mission is to create strong libraries and museums that connect people to information and ideas. 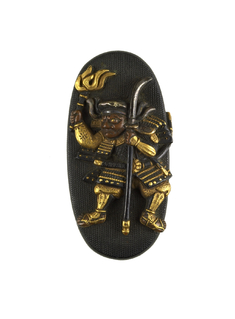 Fuchi with Benkei and Yoshitsune Fighting

Kozuka of a Bridge, Water-wheel and Castle Wall 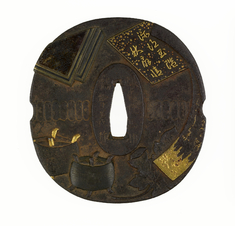 Tsuba with Symbols of the Star Festival (Tanabata)

Kozuka with Shôki the Demon Queller

Kozuka with Soldiers and a Palanquin on a Boat Tsuba with Enshi (Ch. Yen Tzu), One of the Twenty Four Paragons of Filial Piety Kashira with Shoki the Demon Queller 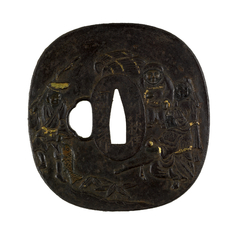 Tsuba with the Seven Gods of Fortune Kashira with Rat and a Hanging Scroll

Kozuka with Chokaro Summoning a Mule from a Gourd

Kozuka with Tiger and Bamboo 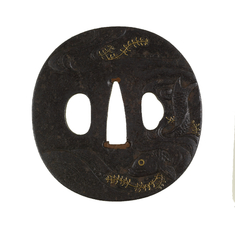 Tsuba with a Carp

Kozuka with a Tiger by a Rock in the Rain 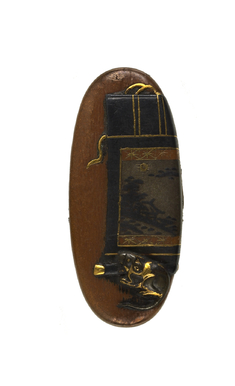 Kashira with Rat and a Hanging Scroll

Fuchi with Rats and a Fan

Kozuka with Momotaro and a Dog Under a Pine Tree

Fuchi with Rats and a Fan

Kozuka with Tiger and Moon

Tsuka with a Dragon 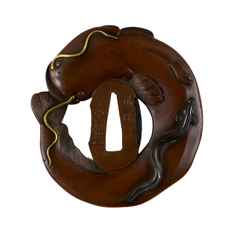 Tsuba with Catfish and Eel 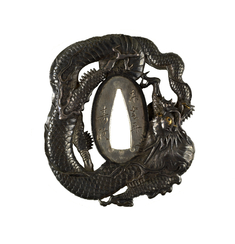 Tsuba with Kamatari and the Jewel Fuchi with Curtain near a Maple Tree