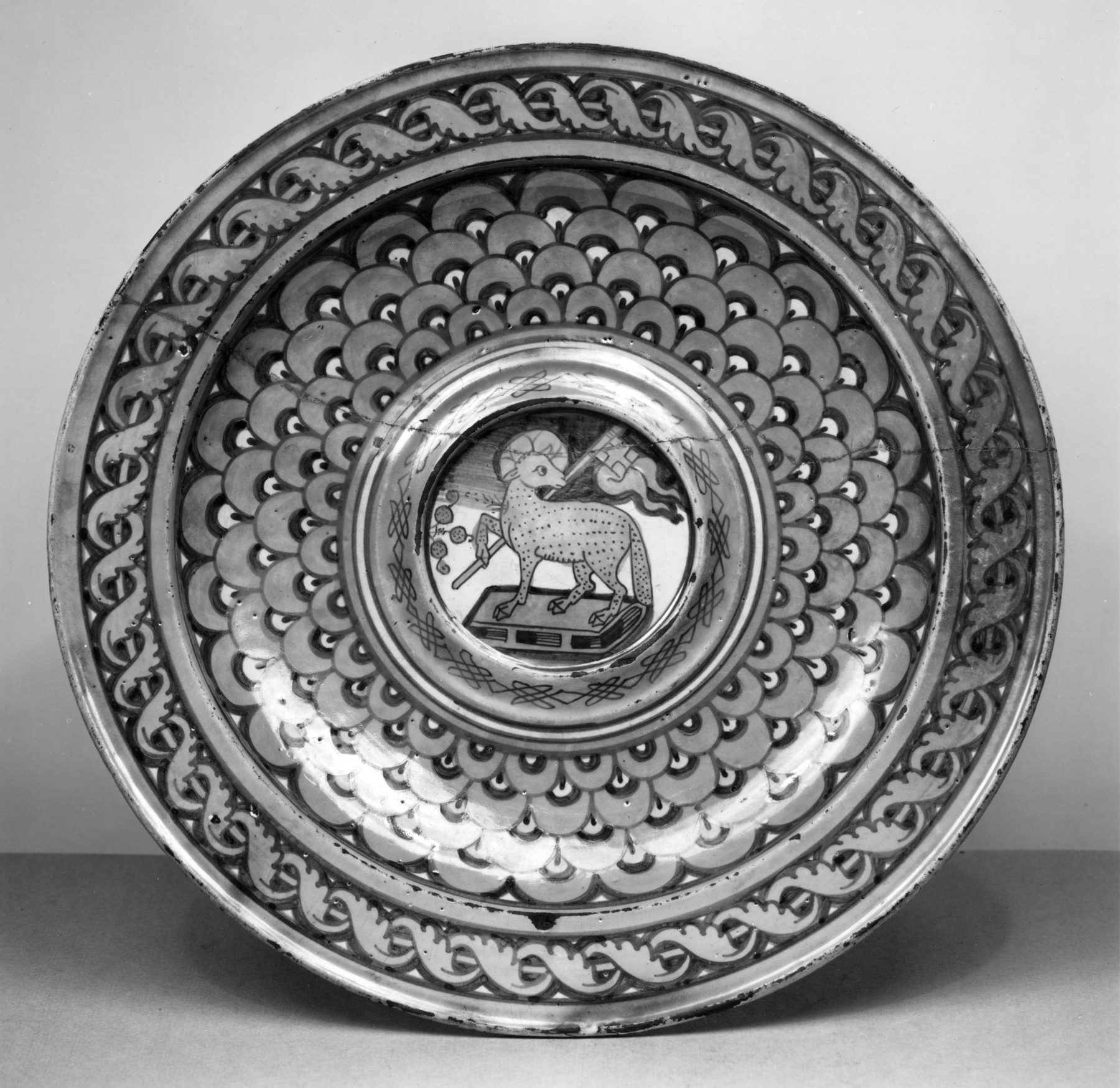 Ewer Basin with the Lamb of God

Basins with central rounded bosses to secure ewers (vase-shaped pitchers) and low sides to hold the water poured into them were popular table and toiletry items during the early 1500s. Unlike the leafy ribbons around the rim and the scale pattern on the basin, which were often found on maiolica produced in Deruta, the center depicts a traditional symbol of Christ, the Lamb of God with a cross banner and standing on a book.

Representing the stage of the development of European ceramics characteristic of the early Renaissance, this basin was made from clay that has been hardened into a permanent form, called earthenware, by firing (baking) at a high temperature in a special kind of oven called a kiln that produces a very high heat. A common modern form of earthenware is the terracotta (baked earth) flower pot. Since earthenware is porous and non-vitreous (glasslike), it requires a glaze to make it impermeable to liquids. After an earthenware object had been fired with no glaze, called the biscuit stage, an opaque, white tin-glaze might be applied, onto which details were added in many colors, and it was fired again.

If a more luxurious, iridescent surface effect was desired, the piece could then be painted in “luster” and fired a third time. The luster consisted of silver or copper oxides that gave the pottery its yellow or red metallic sheen. The tradition of luster painting had been perfected centuries earlier in Islamic culture of the Middle East and transmitted via Egypt and North Africa. The introduction of tin-glazed earthenware with luster decoration into Spain was by Muslim artisans. Since most 15th-century potters in what is now Spain were moriscos, of Moorish (North African) descent, their ceramic wares are called Hispano-Moresque. As developed by Italian artisans, this type of glazed earthenware will become known as maiolica ( for more on which see 48.1336). The decorative surface of this basin reflects the sophisticated ornamental elements characteristic of Islamic art, as well as the heraldic human, animal, and religious symbolic motifs (in this case the lamb) that Hispano-Moresque ceramicists (among others) had earlier employed to reflect the courtly culture of Christian Europe. This basin also demonstrates the use of the gold-colored luster that Italian artisans and patrons so admired on Hispano-Moresque ware.
With the gradual introduction of Asian porcelain into Europe, the desirability of creating ceramics that were harder and more durable than earthenware became apparent. It would be the later 1600s before Europeans would find a way to combine the materials and techniques necessary to begin to produce types of porcelain. For more on maiolica, see: 48.1336
For examples of earlier Hispano-Moresque Lusterware, see: 48.2111; 48.1024; 48.1099; 48.1100; 48.1133; 48. 114548.1184; 48.1203; 48.1214