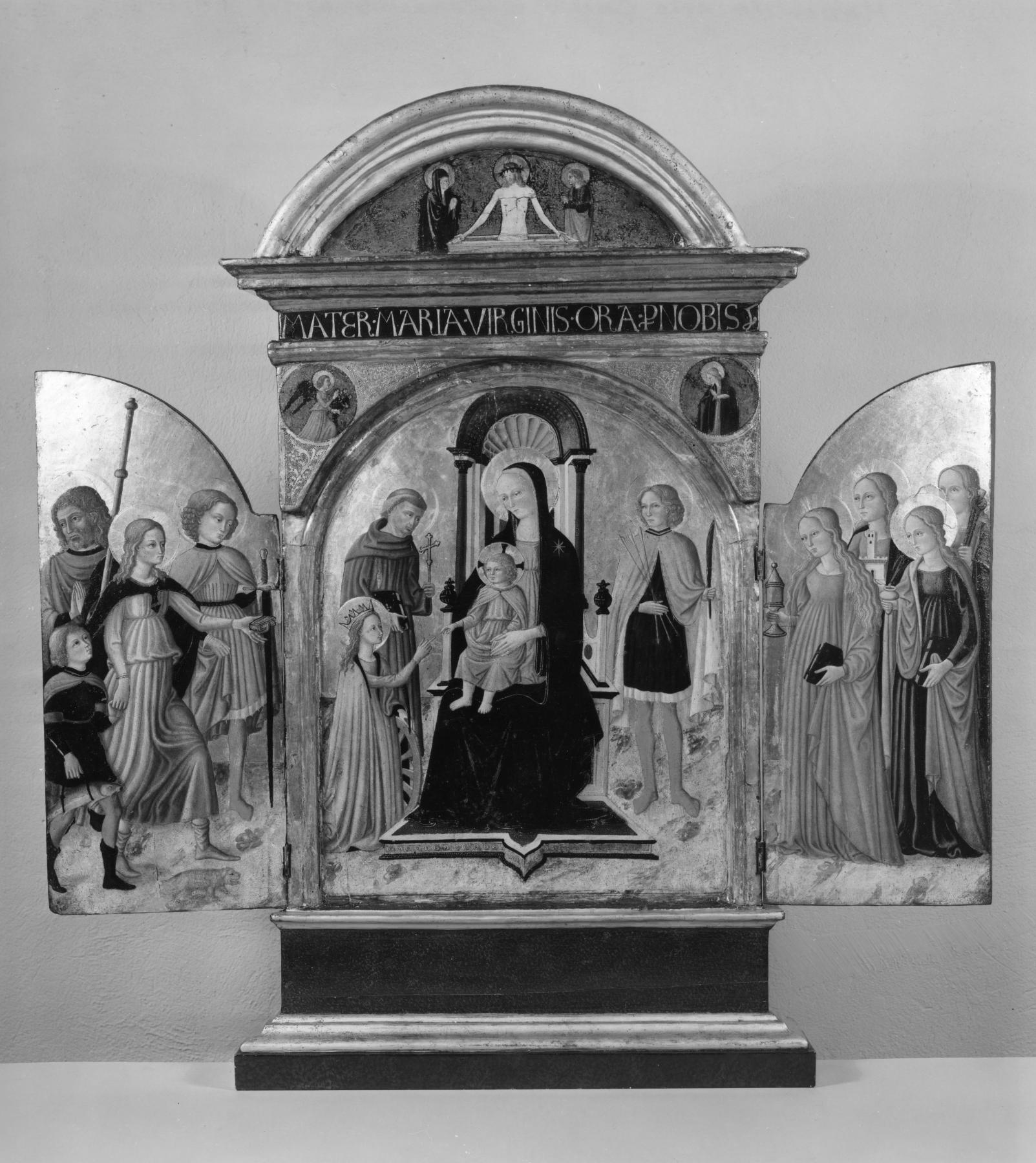 Madonna and Child Enthroned with Saints

Small-scale triptychs (paintings composed of three panels) were common in the domestic interiors of Renaissance Italy where they were focus of daily prayer and devotion. In the central panel of this example the Madonna is shown enthroned with the Christ Child on her lap as he offers a ring to Saint Catherine of Alexandria. The ring indicates Christ and Catherine’s "mystical marriage," or Christ's official acknowledgement of Catherine’s devotion to him. Flanking the throne are Saints Francis of Assisi (at the left) and Sebastian (at the right). A larger host of saints appear in the side panels: at the left are protectors of travelers (Saint Roch with a pilgrim’s staff, the Archangel Raphael with the young Tobias, and Saint Julian with a sword) while at the right are protectors against disease (Mary Magdalen with a jar of ointment, Barbara with a tower, Lucy with a lamp, and Apollonia with a tooth in a pair of pincers). The medallions above the central panel show the Archangel Gabriel (left) announcing to the Virgin (right) that she is pregnant with Christ. The semi-circular lunette at the top of the triptych depicts the "Man of Sorrows," the dead Christ upright in his tomb and displaying his wounds to the viewer.

The side panels of this triptych are hinged so that they can be folded over the central image like a pair of shutters. Triptychs in this format were in fact usually closed and opened only during times of prayer. To help stimulate the viewer’s devotions by creating the illusion that opening the triptych would be like entering a heavenly realm—radiating with gold and jewel-like colors—the backs of the side panels in this example are painted in restricted tones of purple and gray in imitation of the precious stone porphyry.

The Master of the Arcetri Altarpiece is an anonymous artist active in and around Florence during the last quarter of the 15th century. He is named after the church of San Leonardo in Arcetri, Florence, which houses one of his most characteristic works, an altarpiece of "Saint Sebastian, Tobias and the Angel, and Saint Leonard." Though his real name is unknown, the painter’s elongated and highly stylized figures suggest he may have been a colleague of Neri di Bicci’s, represented at the Walters by two altarpieces (37.675 and 37.700).