This belt and group of flasks are associated with the so-called "Turkish Hunting Set," and fit into a velvet recess in the large Parisian Devisme case (Walters 64.165). The red leather belt is tooled with gold arabesque scroll designs and the rectangular buckle is cast with floral designs. Mounted to the belt are three powder flasks that have rounded fronts decorated with foliate designs. Each flask has powder measures that can be adjusted by raising the top portion and positioning a small peg with notched units likely to be decigrams or grains, the traditional units for measuring gunpowder. The left and right flasks have a partially legible maker's mark that reads "BOCHE [illegible]E A PARIS." The center flask is stamped around the rim, "BOCHE/ BREVETE DU ROI 1831" (translated: Boche/ patented by privilege of the king, 1831). The maker was Michel Boche, a mid-nineteenth century Parisian manufacturer and supplier of hunting accessories who held several patents on flasks like these.

[Stamp] Along the rim of center flask: BOCHE/BREVETE DU ROI 1831; [Translation] Of stamp: Boche/Patented by privilege of the king, 1831; [Mark] On left and right flasks: BOCHE (illegible)E A PARIS 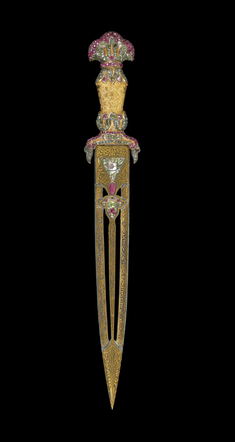