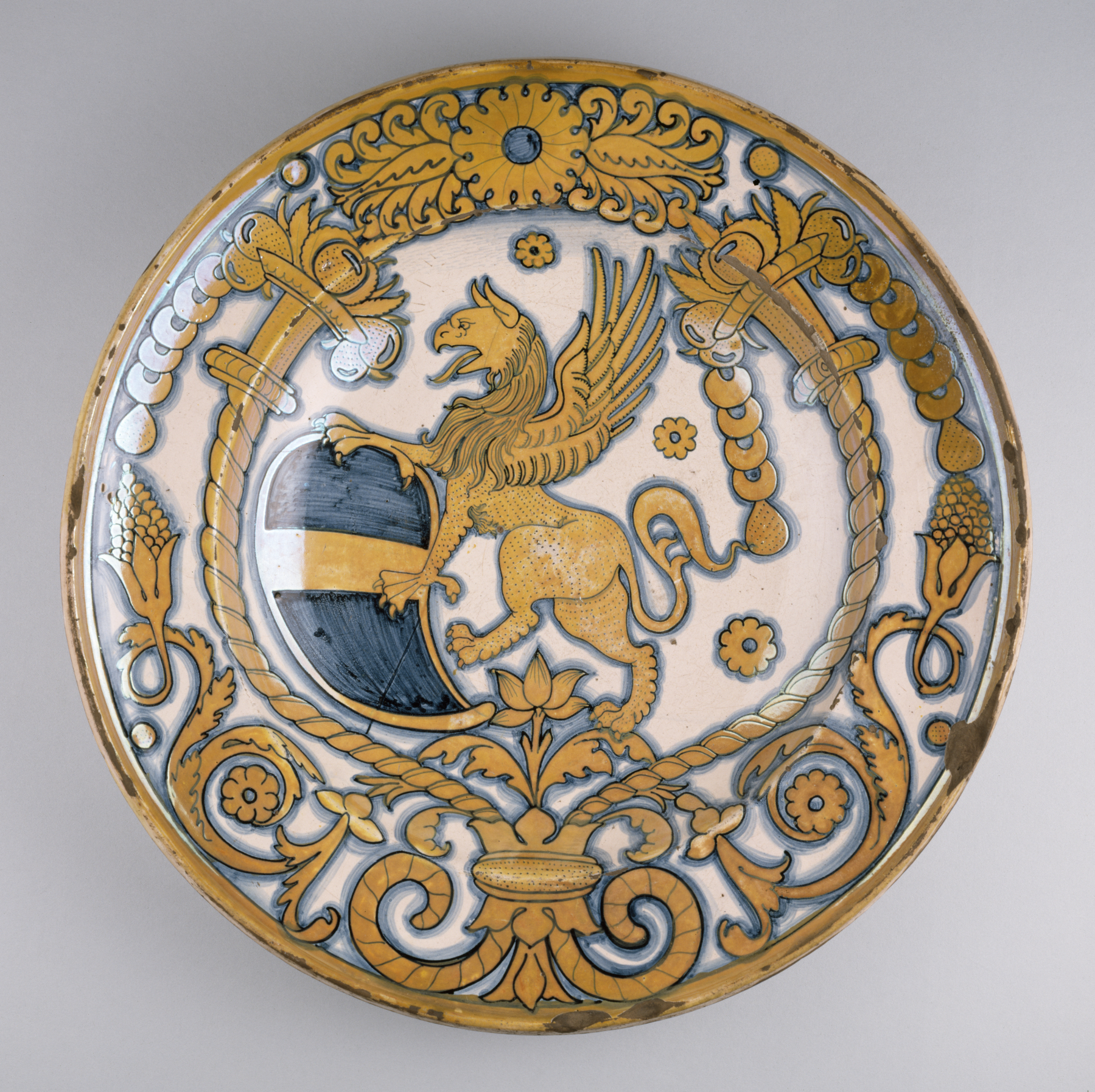 Dish with Coat of Arms of Bishop Baglioni

The decoration of this maiolica dish is centered on the coat of arms of Ercole Baglioni, the bishop of Orvieto, painted in gold-colored luster and cobalt blue and held by the mythical griffin (combination lion and eagle).This dish is presumably from a dinner service commissioned for use during ceremonial occasions at the bishop's official residence. for another example of maiolica bearing a family's coat of arms, see 48.1368.

"Maiolica" is the name by which is known the tin-glazed earthenware produced in Italy from the late Middle Ages to the 18th century and beyond. The word "maiolica" derives from the name sometimes used in Italy for the Spanish island of Majorca, through which passed the Hispano-Moresque pottery that in the 15th century transformed the development of decorative techniques in Italian earthenware. The basic process of making maiolica involved refining clay taken from riverbeds, shaping it on a potter’s wheel or pressing it into a mold, and then firing (baking) it in a kiln, a special kind of oven that could achieve a very high heat. The piece was then covered with a glaze containing tin oxide, which produced an opaque white coating. This white coating was essential as the base for setting off the vivid colors, especially blues and yellow/gold that were essential to the vivid decorative schemes characteristic of maiolica. With the white coat in place the object could be painted with designs in various colors using minerals and other ingredients and fired a second time. The glazed surface made the work impermeable to liquids. If metallic lusters were desired, they were painted on next and the piece was fired a third time. Because of the glazing, the colors on Italian maiolica are as fresh and vibrant today as they were 500 years ago. By 1500, the main centers of maiolica production were near Florence, and later Faenza. Workshops in Gubbio in Umbria were among the first to master the complex techniques of tin glazing and lustering. Urbino took the lead in the 1520s, due to such masters as Francesco Xanto Avelli who developed "istoriato" ware, with surfaces covered by narrative scenes.
For Hispano-Moresque ware, see no. 48.2111
For more on "istoriato" ware, see no. 48.1487