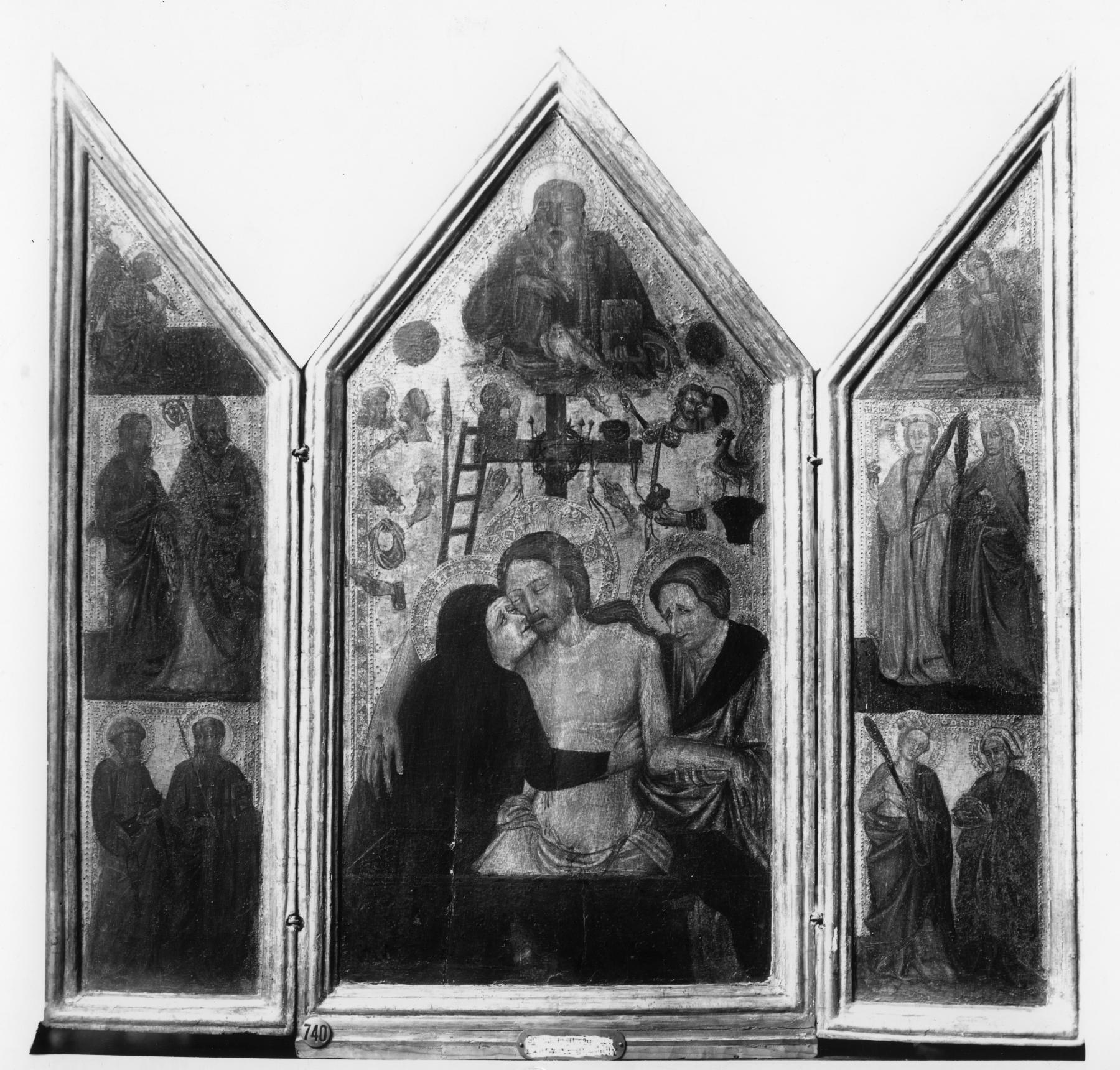 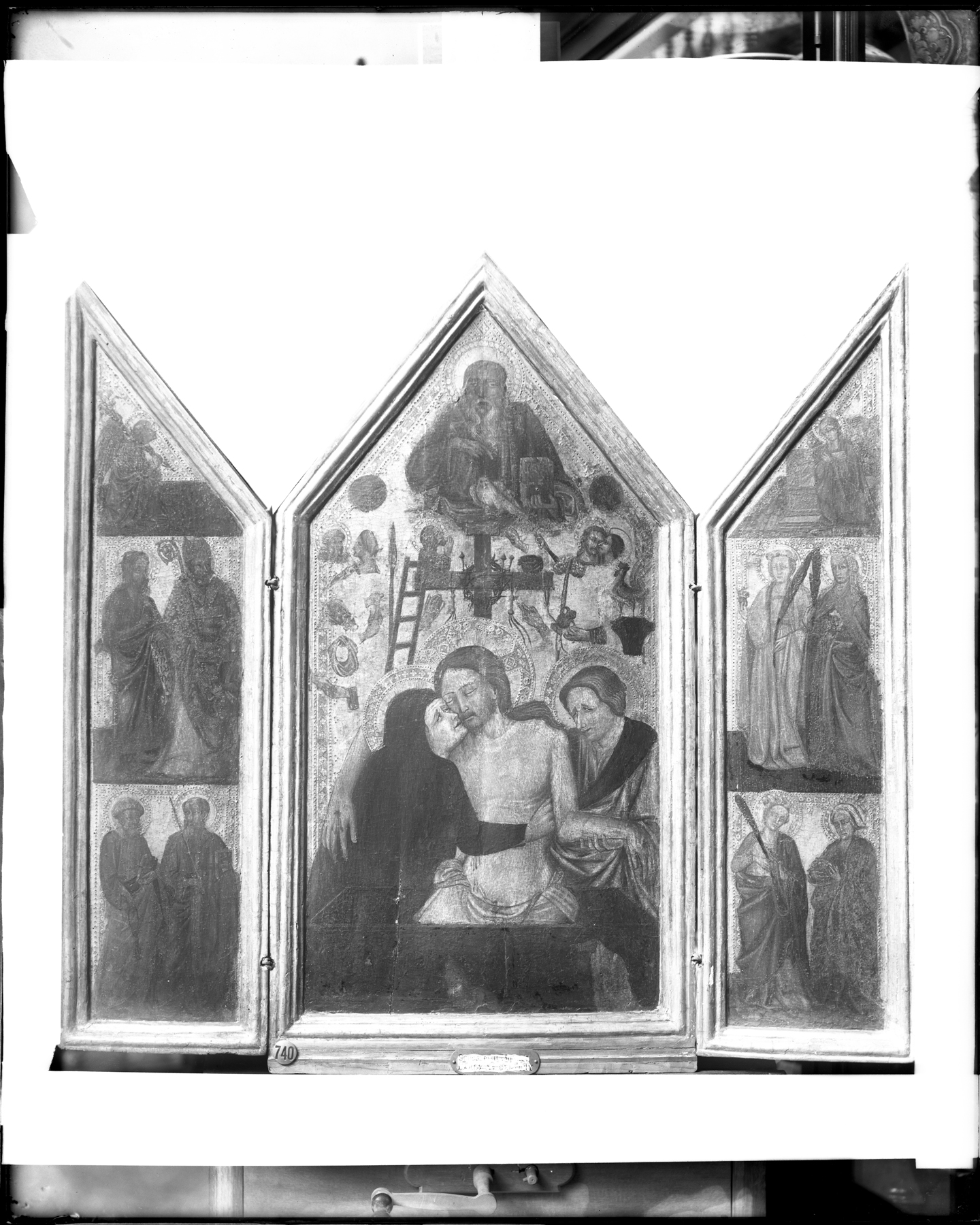 Triptych with the Man of Sorrows, the Arma Christi, the Annunciation, and Saints

In the central panel, the Virgin and St. John the Evangelist lower Christ’s body into a sarcophagus, his wounds still bleeding from the Crucifixion. Behind him, scattered about the gold ground are the arma Christi, the individual objects and scenes excerpted from the story of the Passion of Christ. As the viewer looked at the panel, he or she could review the Passion event by event in his or her mind’s eye, virtually reliving the graphic scenes which result in the battered, lifeless Christ who is lowered into his tomb in the foreground. The actual instruments of the Passion take a prominent place in the composition; the three nails, two flagella (whips), crown of thorns, lance, ladder, and bucket of vinegar and gall decorate the cross behind Christ, while allusions to specific biblical events are arranged around it. Sets of hands play an important part in portraying these scenes. The most recognizable of these appear to the left of Mary’s halo, where the silver coins are passed to Judas; above John the Evangelist’s head, where Pontius Pilate’s hands are washed clean; and below the tomb, where a soldier’s hand holds Christ’s seamless shirt. The figural portraits are much easier to identify: on the left arm of the cross Jesus appears in profile, praying in the Garden of Gethsemane. To his left is the denial of Peter, and to the far right is the kiss of Judas. Surrounding Judas’s kiss are some of many objects specifically mentioned in the descriptions of Christ’s Passion: a rooster crows atop the pillar on which Christ was scourged, and Peter’s sword with Malchus’s severed ear appears beside the sponge soaked in vinegar. While the arma Christi are meant to call to mind physically visceral scenes which emphasize Christ’s humanity, God the Father, who is accompanied by the dove of the Holy Spirit at the apex of the triptych, adds a more celestial aspect to the painting. From his heavenly seat between the sun and moon, God the Father points down towards the brutal sacrifice of his only son, but stares straight ahead stoically. He holds the Book of the Law, perhaps alluding to the predetermined nature of Christ’s death, and the centrality of his sacrifice to Christian teachings. The inclusion of the Annunciation, which appears at the top of the triptych’s wings in the same register as God the Father, adds to the theme of predestination, implying that from the moment of Christ’s conception, he was doomed to sacrifice his life for all of humanity. The result is a complex set of scenes that engender empathetic meditation on Christ’s physical suffering and sacrifice while emphasizing the all-knowing nature of God. Finally, saints fill the wings of the triptych. Beneath the Angel Gabriel stands St. John the Baptist with his scroll, and St. Nicholas of Bari, who, with an unusual iconographic attribute, grasps a boy that he rescued by the hair. Below them, Peter carries his keys, Paul wields his sword, and both apostles hold books. The right wing contains only female saints, three of whom hold palms, which identify them as martyrs. Below Mary stands St. Lucy with a small flame, and St. Catherine, whose spiked wheel peeks out from behind her. Beneath them St. Apollonia, with the pincers used to pull out her teeth, accompanies St. Agnes, who cradles a lamb. This portable triptych is thought to have been painted in Abruzzo, as its peculiar iconography and stylistic components resemble several contemporary frescoes in the region. The figures of Mary and St. John the Baptist look particularly similar to a detail with the patriarchs in a massive Last Judgment fresco in the church of Santa Maria in Piano in Loreto Aprutino, and the rare depiction of St. Nicholas of Bari recalls a portrait of him in a fifteenth-century fresco by an Abruzzo artist in the Cathedral of Atri.