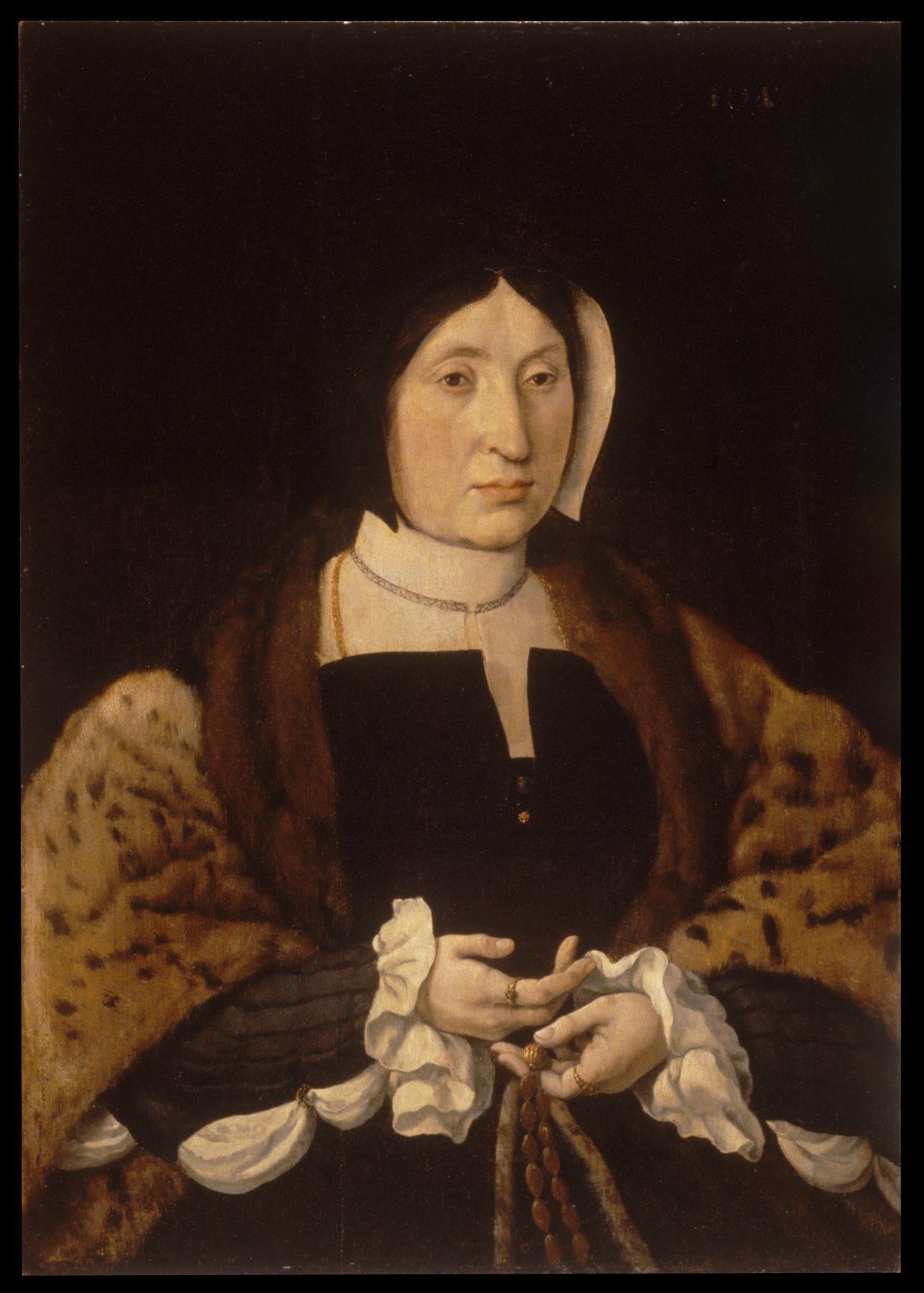 Portrait of a Woman in a Leopard Cloak

The luxuriousness of this gentlewoman’s stole or mantel of European lynx is set off against a variation of a simple linen béguin headdress, a modest style initially associated with the Béguines, a religious order with many communities in the Netherlands. It was very commonly worn by women of status in the 1520s to 1540s and is consistent in time with the slashed sleeves, square-cut bodice with a cleft and high-necked under shirt and over-shirt with an opening in the front.That the woman's pose is angled slightly toward our right--rather than in the reverse that would be expected of a woman depicted in a pair with her husband--suggests that the sitter is single or a widow. The black upper cap, sober expression, and unfocused downward gaze as she fingers a rosary could be read as suggesting that she is a widow.
Since the painting is neither signed nor dated, the current attribution to Hans Vermeyen was made on the basis of style. Before the late 1980s the painting was attributed to the Flemish master Jan Gossaert (ca. 1475-ca. 1533) but in 1986 the scholar Hendrik Horne, preparing a monograph on Vermeyen, alerted the Walters that the painting was included in the files of the Rijksbureau voor Kunsthistorische Documentatie in The Hague as Jan Vermeyen, following an attribution by A.B. de Vries. Horne followed this lead in his monograph on the artist. See Vermeyen's Portrait of a Man Holding a Portrait Miniature, also wearing a lynx mantel, in the National Gallery, London and his Portrait of Jean de Carondelet (Brooklyn Museum) of ca. 1530, one of the many portraits by the artist in which the sitter's hand gestures include curling up one little finger, either to convey the notion of an argument being made or for gestural variety.
Vermeyen enjoyed the patronage of powerful people including Archduchess Margaret of Austria, governor of the Netherlands. His greatest commission was for a tapestry series recording Emperor Charles V’s campaign against the Turks in North Africa (1535–36).