This painting replicates Delaroche's most famous work, a mural in oils and wax (1836-41) in the auditorium of the École des Beaux-Arts in Paris, France's most prestigious art school. Delaroche's pupil, Charles Béranger, is thought to have begun this replica in 1841, but the master completed it following his pupil's death in 1853. It provided a basis for L.-P. Henriquel-Dupont's engraving reproducing the composition.

Represented are great artists of the past who appear to preside over the awards ceremonies held in the auditorium. Enthroned in the center are the three masters of antiquity-Ictinus the architect, Apelles the painter, and Phidias the sculptor-flanked by personifications of Greek and Gothic art (on the left) and Roman and Renaissance art (on the right). Below, the semi-nude figure of Fame leans forward to distribute laurel wreaths to the recipients of the coveted Grand Prix de Rome, who were entitled to spend 4 to 5 years studying in Rome at the expense of the State.

Those European artists from the 13th through the 17th centuries whom Delaroche ranked as the most important are included in his great assembly. To the left are 14 sculptors and a gathering of painters known as colorists and naturalists and, to the right, 13 architects, 2 engravers, and 19 painters distinguished for their drawing. Although many of their names are familiar today, among them Titian, Rembrandt, and Rubens on the left, and Raphael, Michelangelo, and Poussin on the right, others are less so. Notably absent are Botticelli, El Greco, and Vermeer, whose paintings were not rediscovered until later in the century.

According to the accounts of the dealer Adolphe Goupil the exceptionally elaborate frame cost 5,000 French francs, or $1,000, a remarkable sum in 1853. 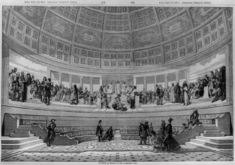 The Hemicycle of the Ecole des Beaux-Arts