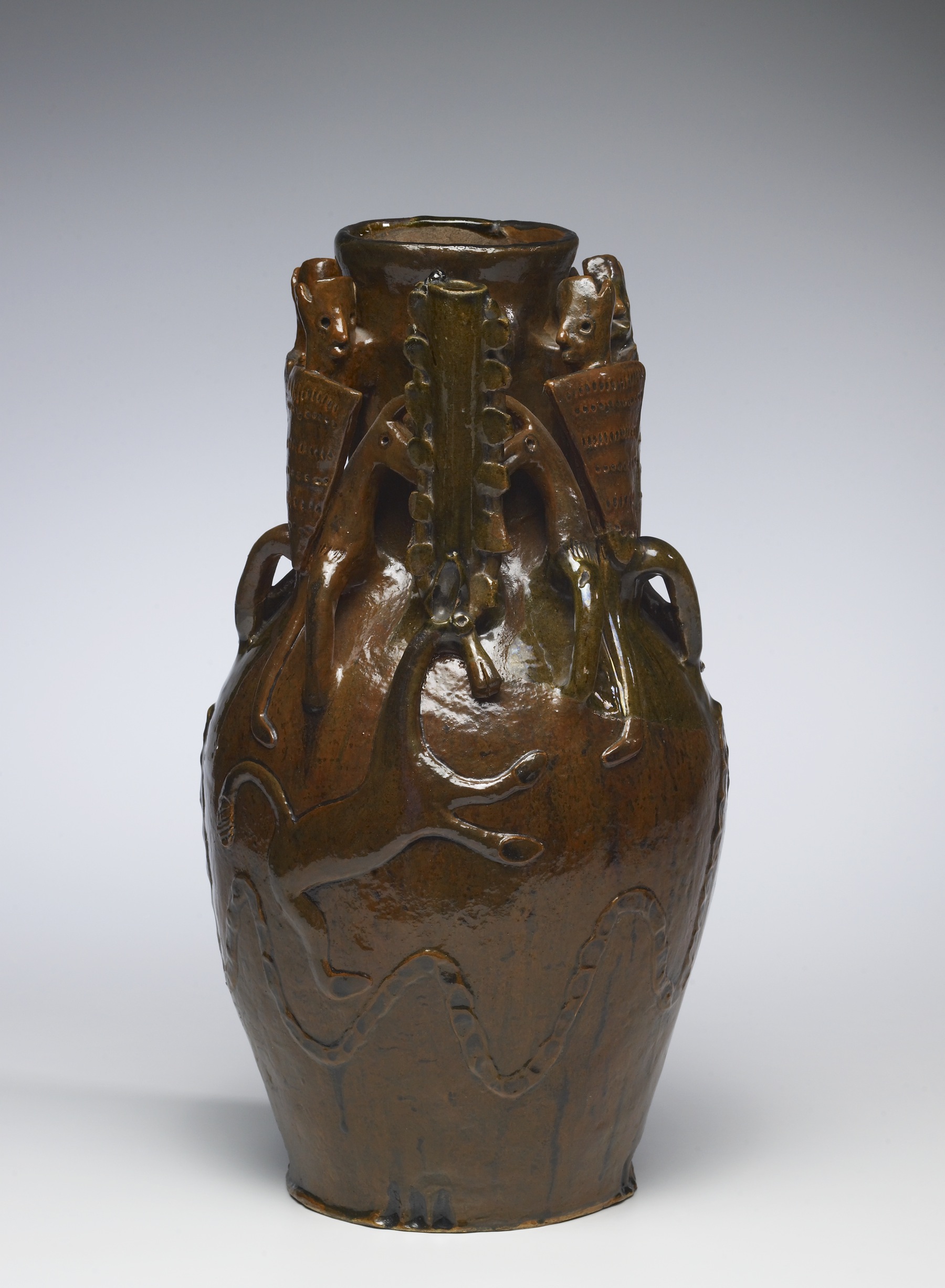 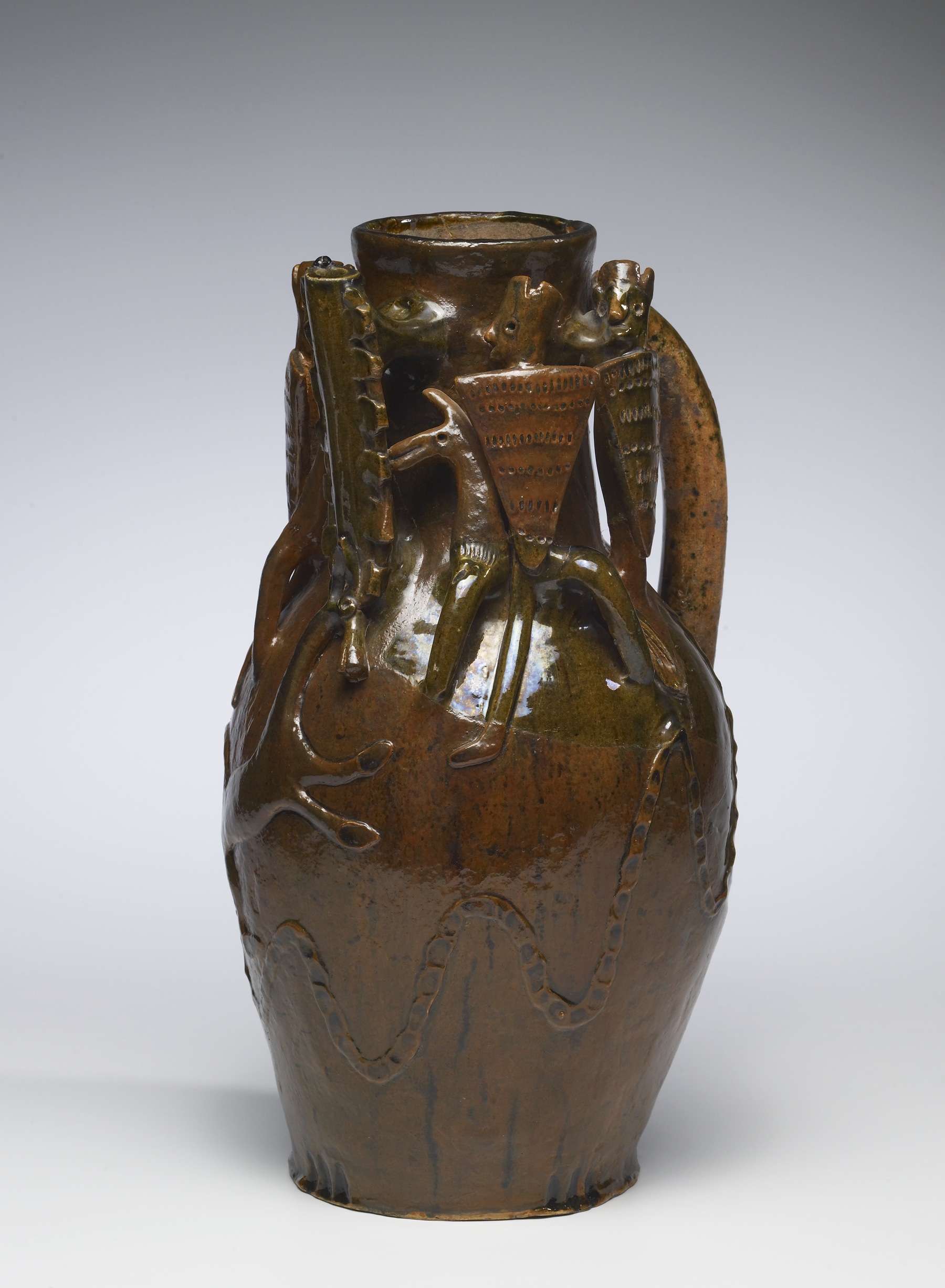 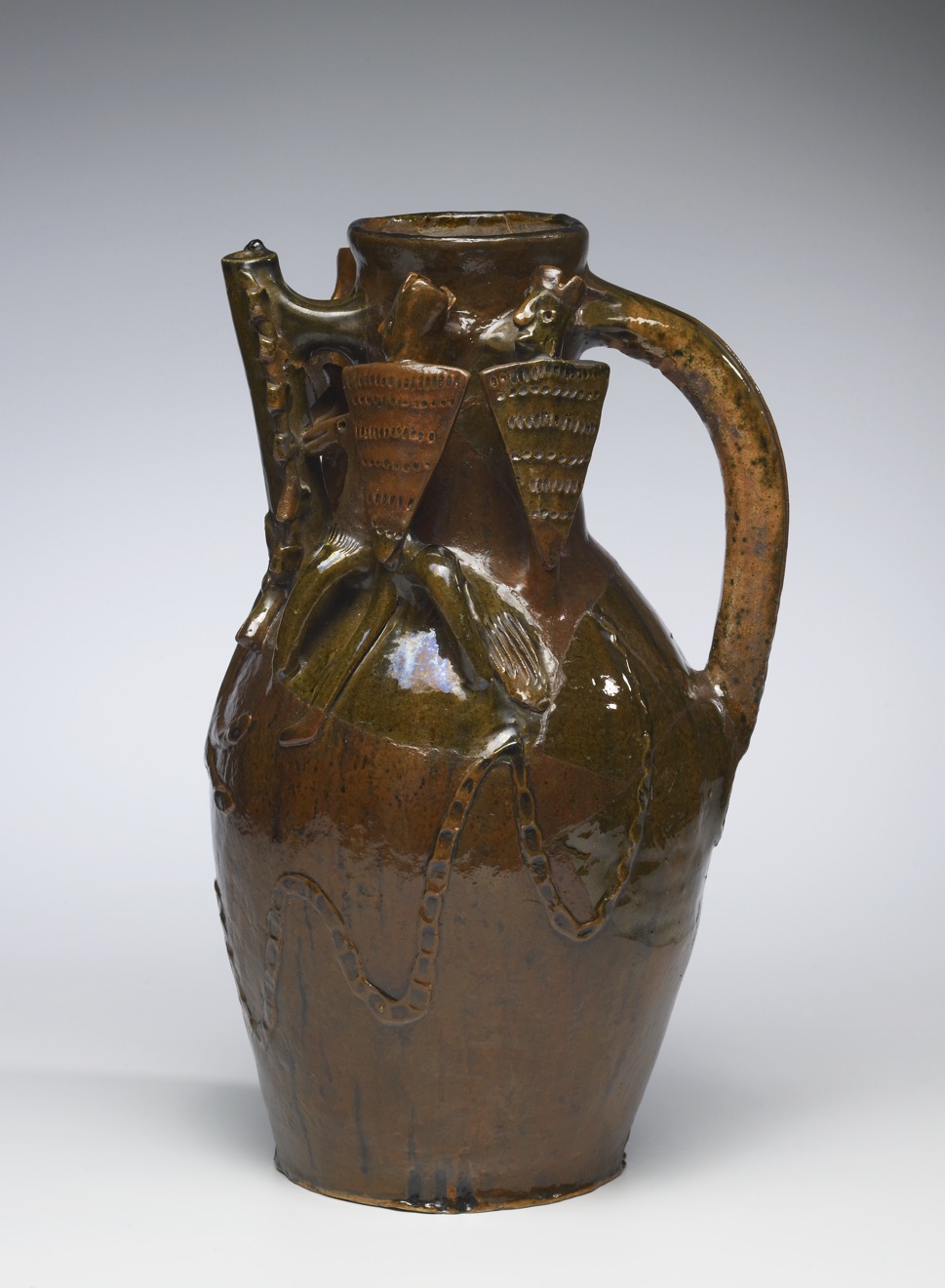 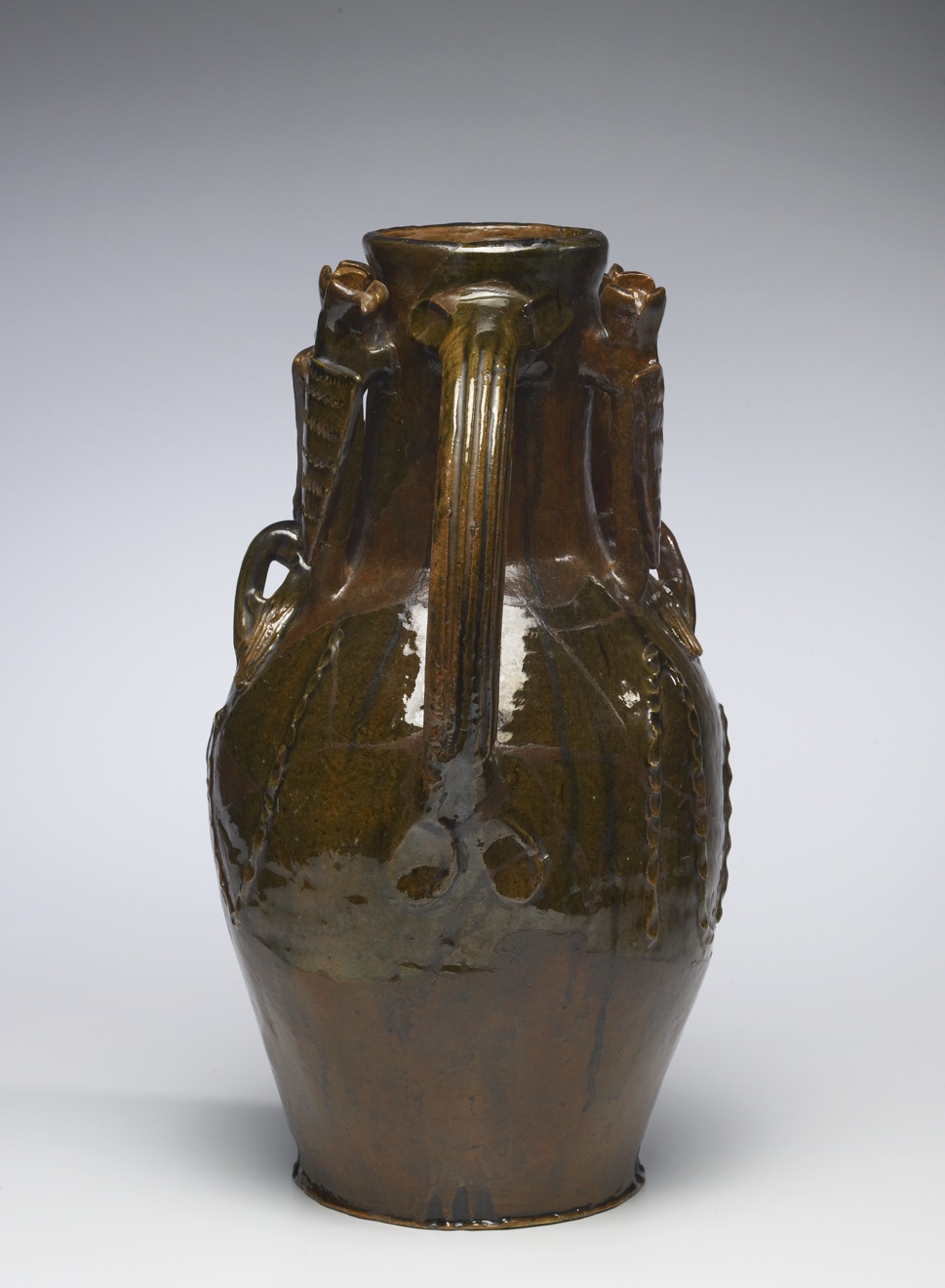 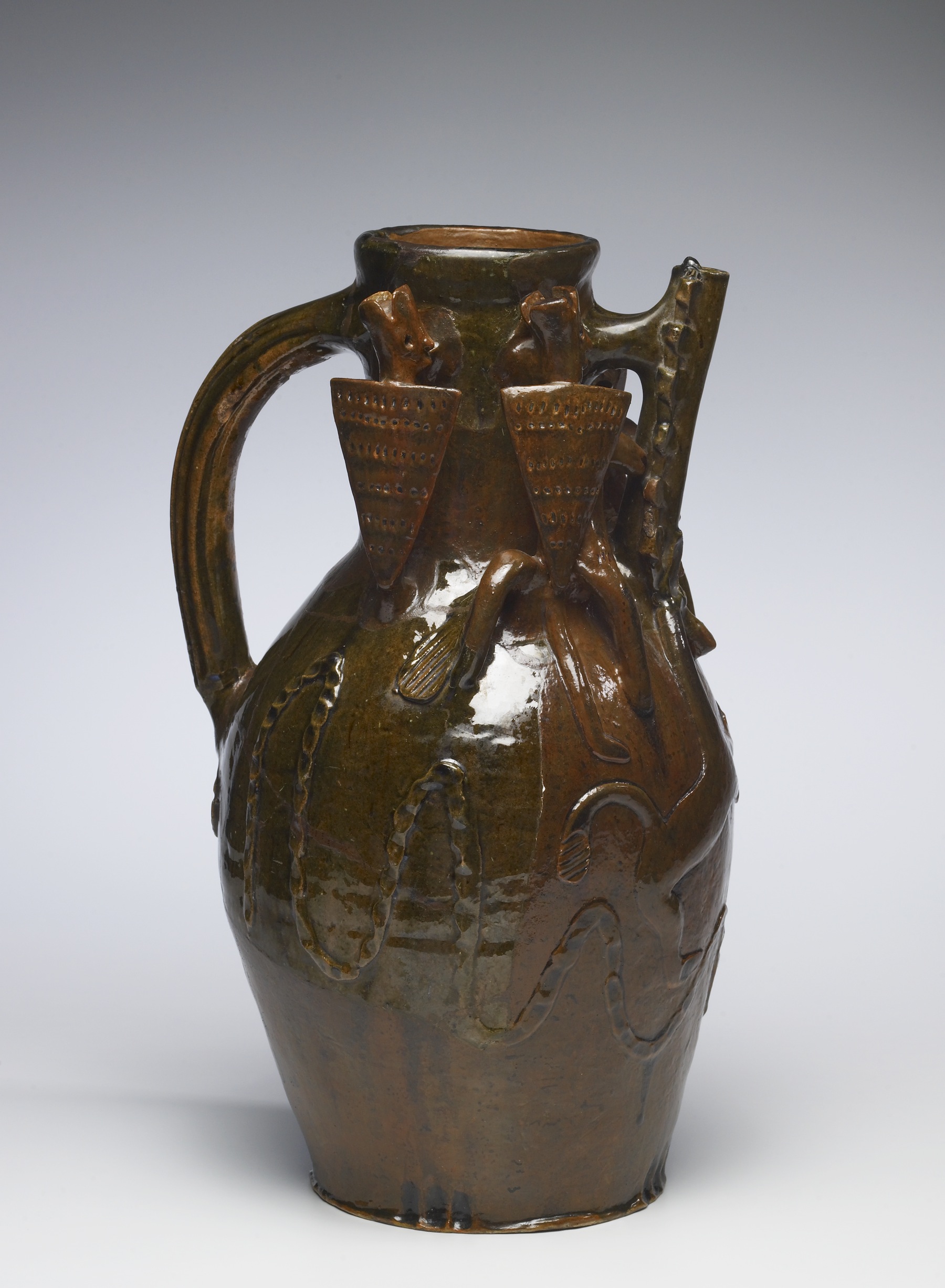 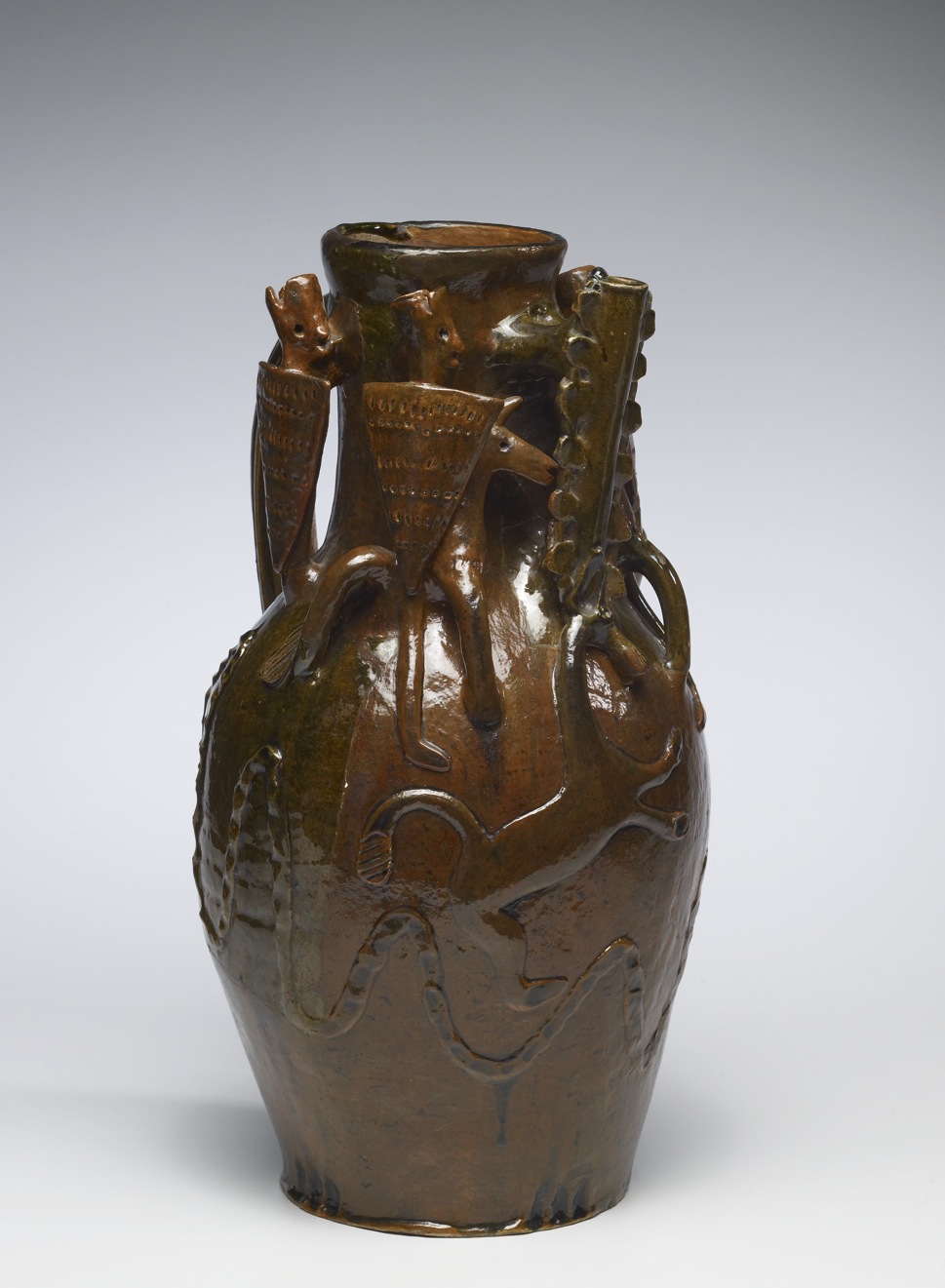 This jug is one of a small group of ewers known as Knight Jugs for their elaborate decoration of knights on horseback. It is made of wheel-thrown earthenware with a tubular bridge-spout, rod handle, and four sets of three finger impressions at the base. The neck and shoulder of the jug is covered in a hand-modeled tableau of very high relief, which in places stands free of the vessel.

Four knights chase a stag around the body of the vessel. The animal's antlers run the length of the spout. An applied finger-pressed strip defines the ground on which the stag runs. It seems to have been applied by a smaller hand, possibly a young member of the workshop. The rod handle, decorated with four grooves, is secured to the upper and lower parts of the body of the vessel with thumb impressions made by a larger hand, on either side of the handle.

Knight Jugs are the most celebrated of all medieval English pottery. The most important site of manufacture was Scarborough in Yorkshire. The products of this kiln were exported all over the North Sea. The present example is one of only four Scarborough-ware Knight jugs and it is the second only in quality, preservation, and complexity of decoration to the example now on Nottingham Castle Museum (at right). This is the only example still in private hands. The other three examples are at the Scarborough Museum, at the Fitzwilliam Museum in Cambridge, and in Bruges.

A jug of this kind would have been used for serving drinks or hand washing most probably in some type of ceremonial settings. When full the jug would have been quite heavy, and in manuscripts illuminations this type of vessel is shown being carried on the head or shoulders. Artifacts of this type are important to document the secular life and culture of the Middle Ages. This vessel is particularly appropriate because of its chivalric theme. Chivalric culture and the idolization of all that it entailed–hunting, crusading, camaraderie, gallant behavior, and loyalty–was an important component of Gothic society and was shared by all, including those social classes that did not belong to it by birth. With its playful hunt running around its body, the jug celebrates knightly culture in a domestic setting.

[Inscription] In black ink on the interior of a rim fragment: High St. Dartford 1959

Gift of the Women’s Committee of the Walters Art Museum on the occasion of their 50th Anniversary; museum purchase with funds provided by the Alton T. Jones Fund, 2014