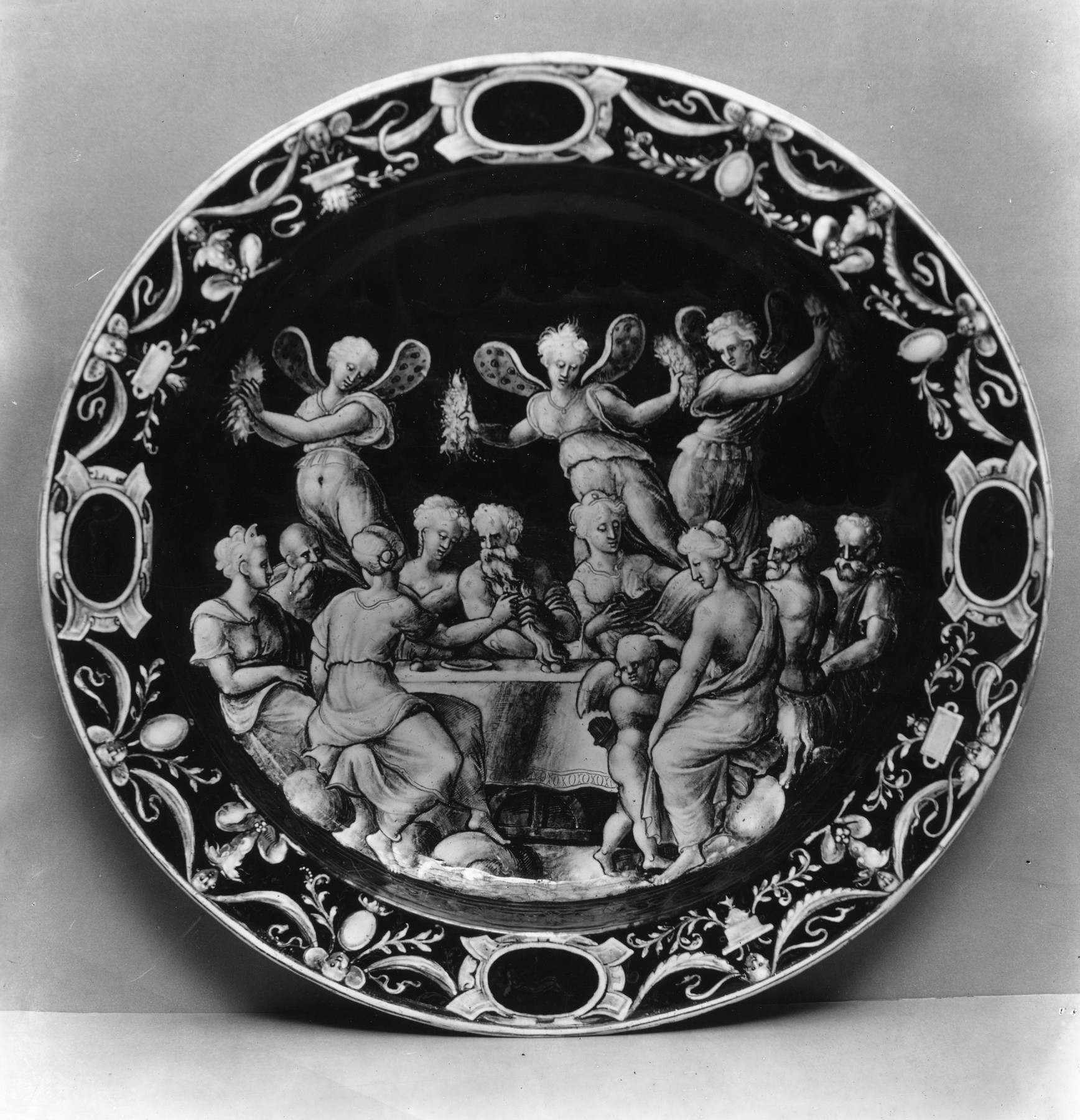 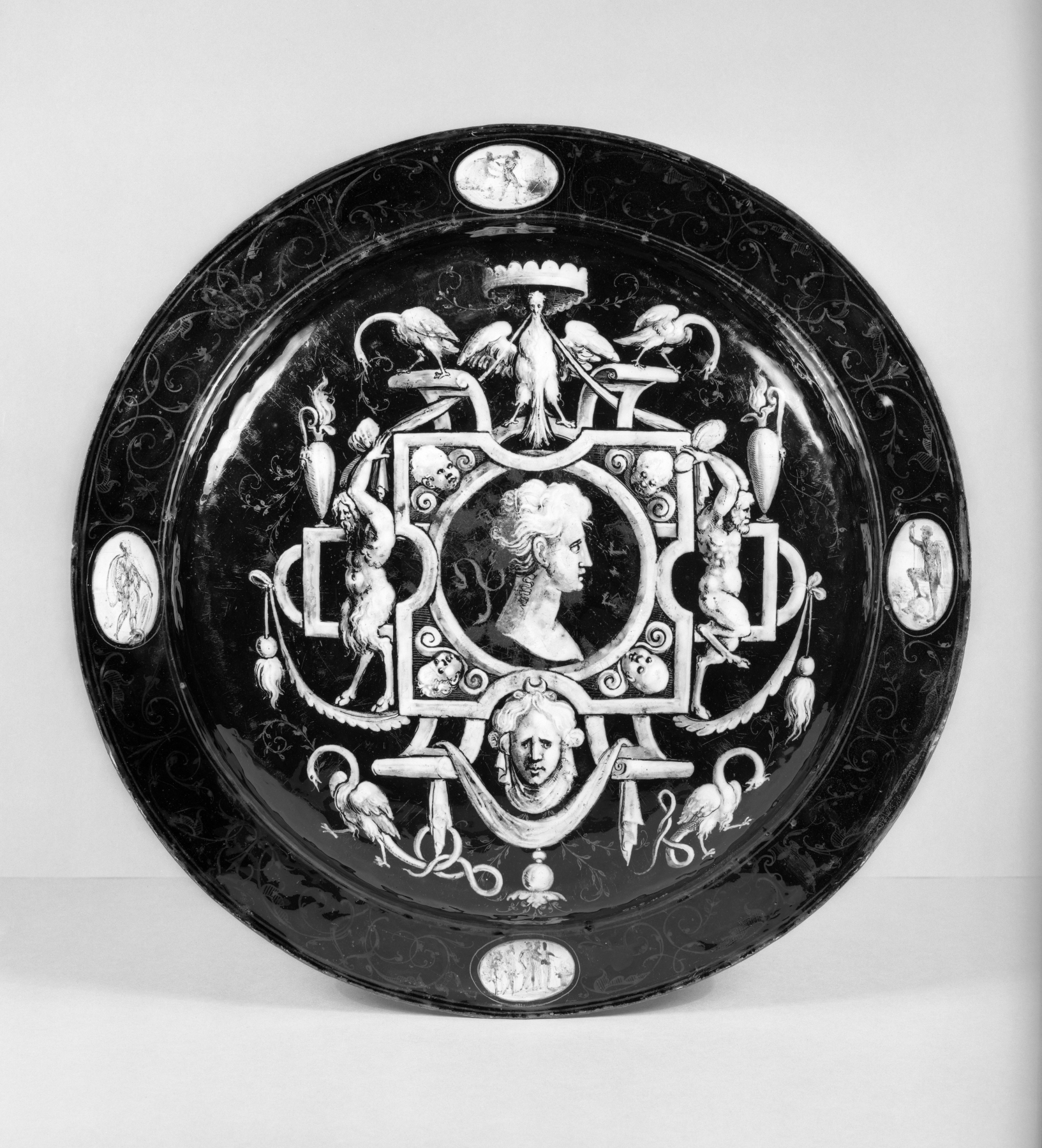 Dish with the Wedding Banquet of Cupid and Psyche

Bearing the monogram of Leonard Limosin (L.L.) on the back, this dish is one of the master’s finest works. It depicts an episode in the tale of Cupid and Psyche from Book VI of the “Golden Ass” by the Roman author Lucius Apuleius (ca. 123-ca 170 CE). In the center, Jupiter, king of the gods, sits at a banquet table holding his thunderbolt, surrounded by other gods and goddesses. In the foreground on the right, the god of love Eros or Cupid, son of Venus, is shown here as a small child, standing at the knee of his adult bride, Psyche. Above the gathering hover the Horae, winged goddesses associated with the seasons, time, and marriages of the gods. This composition ultimately derives from the fresco “The Wedding Feat of Cupid and Psyche” (1518-19) in the Villa Farnesina in Rome, which was designed by Raphael (1483-1520) and painted by two of his assistants, Giulio Romano (1499-1564) and Giovanni Francesco Penni (1496-1528). Various drawings and engravings of the fresco were made throughout the sixteenth century, and these copies heavily influenced French enamel painters depicting the banquet scene on their wares (for other examples of this scene painted in enamel, see Walters nos. 44.286 and 44.210). This version is taken from plate 31 in a series of thirty-two plates depicting the legend of Psyche by the Italian engravers the Master of the Die (1512-1570) and Agostino Veneziano (1490-1540), after drawings by the Flemish artist Michiel Coxie (1499-1592).

On the reverse, a central medallion contains the bust of a woman whose profile is framed in a strapwork composition that encloses four putto masks, and includes a satyr standing on either side. Below is a mask of Diana, virgin goddess of the moon and the hunt, while above an eagle stands between two swans. This dish would have been publicly displayed within a home, perhaps on a table or sideboard. Its Classical subject matter is characteristic of Renaissance Limoges enamels, which often portrayed scenes from Antiquity or the Bible. The figures painted in grisaille (grayness)—a technique that involves building up the design in successive layers of black and white enamel—as well as the high quality of detail and shading exhibited throughout the dish are representative of Limosin’s works made during the second half of the sixteenth century. Born in Limoges, Limosin likely trained in the workshop of Nardon (1470-1542/43) and Jean I Penicaud (ca. 1490-after 1543), and copied the prints of Albrecht Dürer (1471-1528) and other German artists early in his career. Around 1536, he was introduced at the French court by his patron Jean de Langeac (d.1541), bishop of Limoges and royal councilor to King Francis I (1494-1547). Limosin held a royal appointment to Francis as early as 1545, and later served as an enamellist to Kings Henry II (1519-1559), Francis II (1544-1560), and Charles IX (1550-1574) of France. At court, he was influenced by the School of Fontainebleau (artists associated with the court situated at the palace at Fontainebleau), and the works of the Italian Mannerists Rosso Fiorentino (1495-1540) and Francesco Primaticcio (1504-1570). Limosin is perhaps best known for his enamel portraits of royal figures such as Francis I (1494-1547), Henry II, and Marguerite of Navarre (1492-1549. For his portrait of the last, see Walters 44.504. By the time of his death, Limosin and his workshop had produced more than one thousand enamels, including tableware, vases, caskets, mirrors, and other decorative objects. To view other enamels by Limosin, click on his name in the creator field.