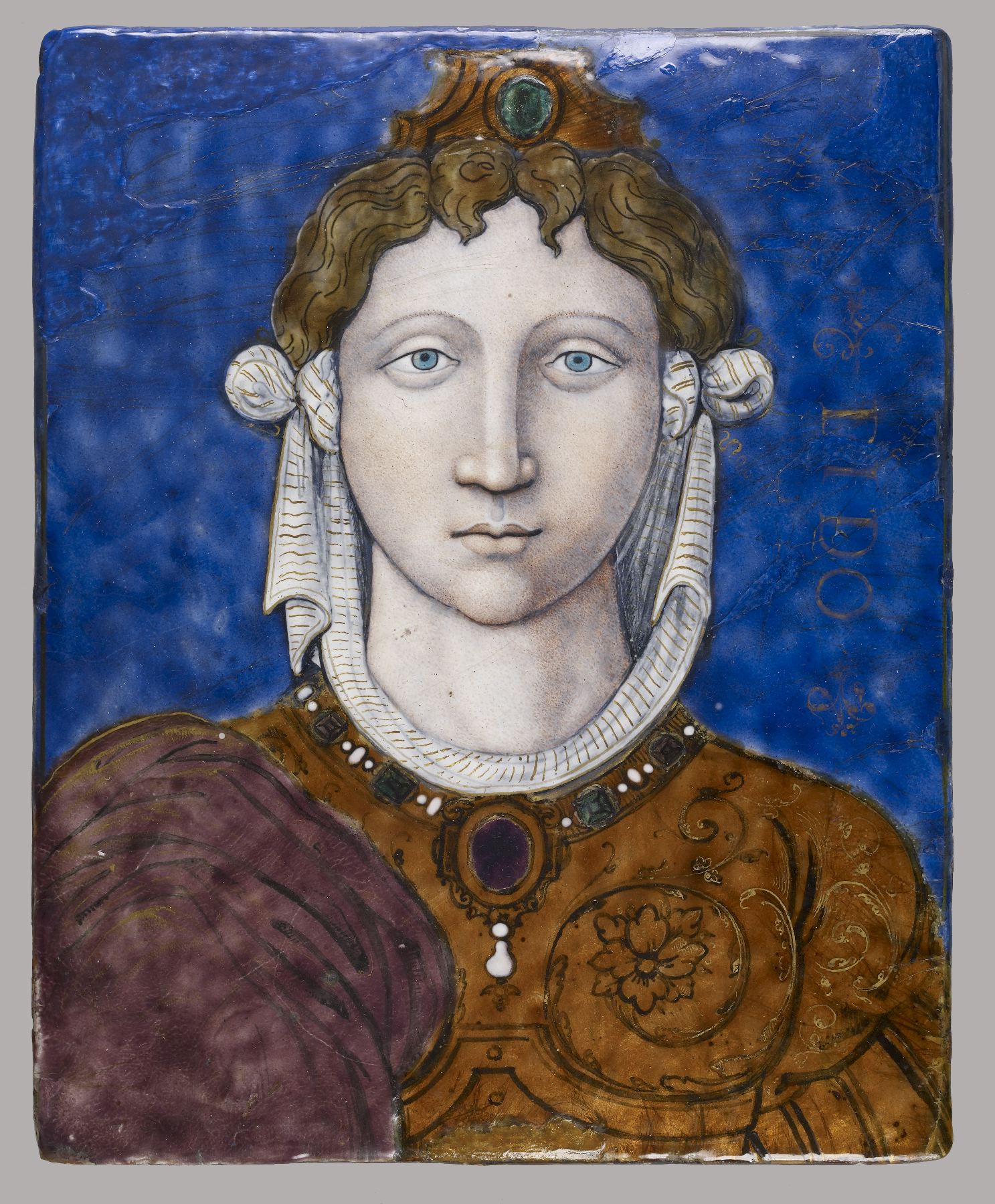 Dido, the 9th-century BCE Phoenician princess who became queen of Carthage, is represented as the full-face bust portrait (idealized) of a woman who stoically faces death.

As a young woman in Tyre, the Phoenician captial, she was threatened by her brother who had killed her husband and claimed the throne; she fled Tyre with followers and landed on the coast of what is now Tunisia where she founded Carthage. An excellent ruler as well as beautiful, Dido was desired by the king of the neighboring Mauritani. Seeing that he would attack Carthage to get his way, she mounted a commemorative pyre she had prepared for her deceased husband, lit it, and stabbed herself. By committing suicide she preserved her honor and chastity while remaining true to her deceased husband.

However, in the 1500s, the fictionalized version of her in the "Aeneid" (29-20 BC), the story of the wonderings of the Trojan Aeneas (see 44.239) by the Roman poet Virgil, assumed a canonical status.Virgil made Dido into a seductive foil for his flawed but ultimately stalwart hero who has fled the destruction of Troy (which took place 400 years before the founding of Carthage, as Renaissance scholars knew).Virgil represents Dido as infatuated with Aeneas and succumbing to temptation. When Aeneas abandons her, she commits suicide from anguish and humiliation.

The plaques are from a series based on Ovid's pairs of lovers by the enamel painter to teh French court.

Virgil's contemporary, the poet Ovid, conceived his own rendering of Virgil's story, imagining a letter, mournful yet restrained, written by Dido to the husband (as she considers Aeneas to be) who abandoned her, one of the poet's Letters from Heroines (Heroidum Epistulae, ca. 20-17BC) which found expression in Renaissance art, especially in France. Series as that by the French court enamel painter Leonard Limousin ca. 1564-65, depicting pairs of lovers, including the Walters' Dido and Aeneas (44.239), surely appealed to female patrons; this one may have been inserted in the woodwork of a lady's chamber. In this plaque, Dido, is again the dignified ruler, even in the hour of her death. She is also blond, with pale skin, in keeping with the criteria for female beauty celebrated by many Renaissance writers, but she wears armor, a cuirass, covering her upper body, indicating her role as commander. She wears a gold-brown tiara with a green cabochon (translucent green enamel on foil), a necklace of "pearls, rubies and emeralds," and a jeweled pendant featuring a large red stone. The jewel-like effect of these ornaments is produced by drops of white and translucent enamels on foils.

See also the contemporaneous painted enamel casket (44.64) depcting episodes from the romance of Dido and Aeneas. 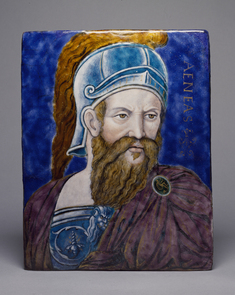