Due to its plentiful supply, beautiful translucent tone, and soft texture that made it easy to carve, alabaster was commonly used for English relief sculpture in the 14th and 15th centuries. Many of the reliefs that survive today are panels from altarpieces of the Passion of Christ or the Life of the Virgin. The altarpieces were not very expensive and were made for both local use and export to the continent by workshops in Nottingham, near where the alabaster was quarried. They were generally painted, and traces of pigment are often visible today. See also Walters 27.8, 27.309, and 27.308.

This figure of Saint John the Evangelist evinces the characteristics of this period in art known as International Gothic. The elongation and grace of his hands, feet, and draping gown show elements of the this style, which towards the end of the Middle Ages had spread through Europe and England. He is characteristically beardless and holds in his right hand a book representing his writings, on which rests his symbol, an eagle. In his left hand he holds the palm branch given to him by the Virgin Mary. 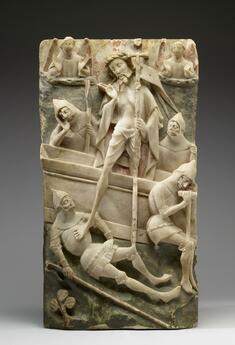 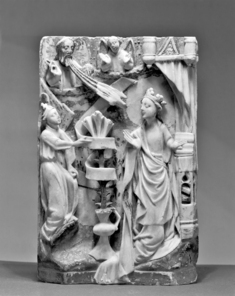